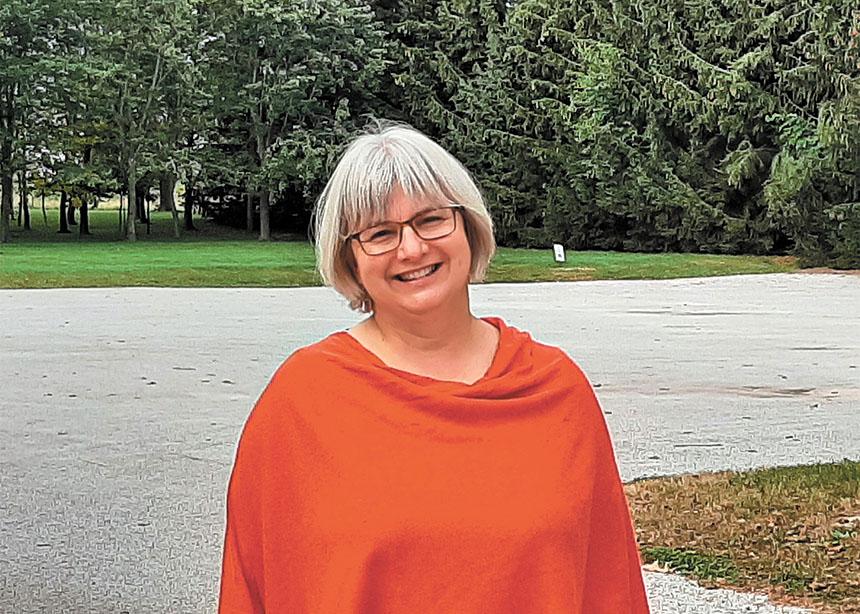 Ruth Boehm is pictured in the church parking lot where a man spent a year sleeping out in his truck. (Photo by Charleen Jongejan Harder)

It was the spring of 2018, Pastor Ruth Boehm of Faith Mennonite Church in Leamington recalls, when the father of one of the kids attending the after-school program at the church approached her, asking if he could park his truck in the church parking lot overnight. He could not stay in his home.

“I knew him when he was doing well,” Boehm says. “Now he was in trouble, out of a job, out of a place to stay.”

Permission was granted, and overnight became a year.

“I didn’t want to give him money,” she says. “I said it was a systemic issue, and I would work on the systemic issues that had pushed him into the parking lot. I invited him into the process. He came to several of the first meetings, and it was something positive I could reflect back to his partner, to his mom.”

Boehm shared his story at the Leamington ecumenical ministerial group, and more stories were told around the table. Someone was staying at the Lutheran church and at the Anglican church as well.

Boehm was designated to bring their concerns to the newly elected mayor of Leamington, Hilda MacDonald.

From Boehm’s perspective, the mayor has advocated a lot in the past few years.

Housing issues in Leamington are complex. As farming in the county moves increasingly towards greenhouse operations, more migrant workers are coming to the community. Sewage and other infrastructure issues limit how many workers can be housed on site, leading many farms to buy up available properties in town for worker housing, causing a housing shortage.

Meanwhile, urbanites are increasingly buying property further out from Toronto and driving prices up. Rental housing has become unaffordable and practically unavailable; rent was $900, now it is well over $2,000 a month.

“It’s an absolute lottery to get a house,” Boehm laments.

Another issue facing rural communities is that most social services are provided in the city. Funding is provided based on data for services used; and since rural people are counted among the city dwellers, no funding for housing is channelled to rural communities.

Mayor Hilda responded to Boehm’s initial request by bringing together representatives from the municipality, churches and social agencies. Eighteen people showed up at the first meeting.

Carolyn Warkentin, a member at Leamington United Mennonite Church, and the director of the South Essex Community Council, was there. “All my professional life I’ve worked in Leamington; issues of homelessness are not new to me,” she says.

After initial conversations, Warkentin suggested that the Leamington Homelessness Project apply for a one-year grant, hire someone who could gather data and write a report including local solutions.

“The pandemic has exacerbated the issues,” Warkentin says. “When everything was locked down, I was so disturbed to realize that folks on the streets had no access to washroom facilities or fresh water.

“As a Christian, I believe it’s imperative that people have their basic dignity respected: basic needs, shelter, a safe place to go,” she says. “Our systems are broken. It’s time that Christians start pressuring our governments and advocate for systems to be overhauled and fixed. No person should sleep out on the street. This is a moral imperative, an ethical imperative. We all benefit from everyone being housed safely; we all have a stake in it. I feel a calling that my community is well served and that all people are given equitable access.”

Alyssa Enns was hired by the Leamington Homelessness Project a year ago, and the report was recently published online at www.secc.on.ca/findinghome. She has been hired for another year, working under Warkentin.

COVID-19 stalled the process, but five individuals had already been housed by mid-September.

“Zero Homelessness is achievable in Leamington,” says Warkentin. “It means a robust support system after they are housed and preventing evictions in the first place, but I believe it is doable. A rural community might even be better positioned to do this, to be innovative and serve our people with dignity.”

“Working together has shaped our ministerial,” says Boehm. “We are partners with agencies and municipalities and other churches. We’ve added a second weekly community meal. It’s changed my congregation. It’s changed me, how I minister. God has really led us to be an authentic part of our community. It started with a question, ‘Can I spend the night in your parking lot?’ And oh, here we go! God’s at work, getting us outside ourselves.” 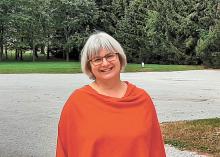 Ruth Boehm is pictured in the church parking lot where a man spent a year sleeping out in his truck. (Photo by Charleen Jongejan Harder) 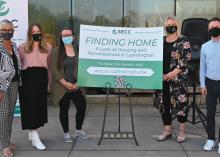 Is the need housing, homes or caring communities? The questions of the costs related to homelessness that Pastor Ruth Boehm and others in Leamington are struggling with have been with the major cities for years. It is now slowly but surely creeping into more and more small towns throughout Canada.

Do people just need housing ? No, they need a place where they can feel at home. And , then they want to be at home near to and with others. They want homes in communities as do most people.

Leamington should think outside the box. Planning and discussing with organizations such as Habitat For Humanity for a more practical and beneficial solution that responds to the physical, mental and spiritual needs of this growing demographic of needy people.

Churches and parishioners receive huge tax exemptions. Both with property taxes and personal income tax exemptions. Perhaps they should be a little less preoccupied with their elaborate buildings and fancy sanctuaries and design more buildings that provide the security of a community. The homeless are not simply house-less, they are community-less. Who is willing to provide space for the community-less?