Seeing God in the lives of others 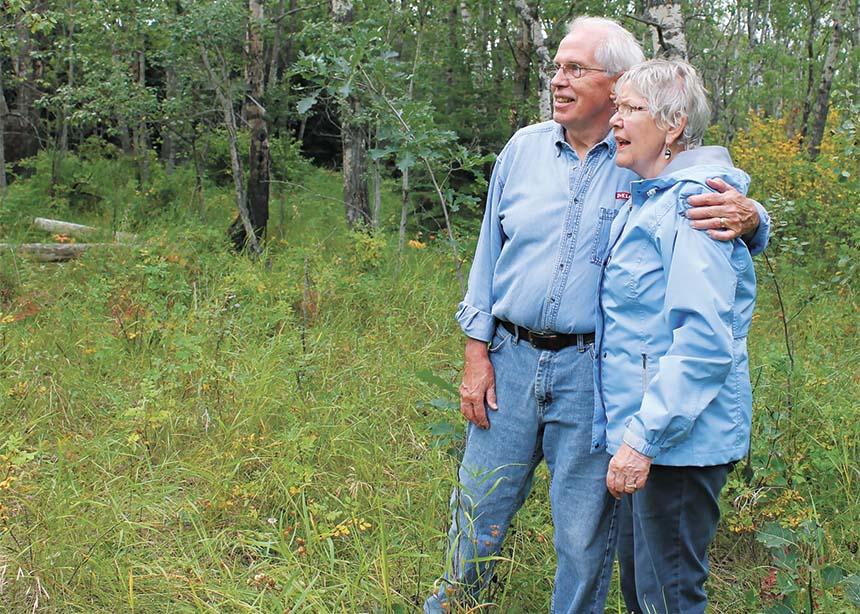 Wayne and Carry Dueck, pictured in 2019, enjoy the fruits of their labours on ‘The Land,’ where they planted thousands of coniferous trees over the years. (Photo by Donna Schulz)

Eight years ago, I received an e-mail from then editor Dick Benner, asking me whether I’d consider being Canadian Mennonite’s Saskatchewan correspondent.

It sounds trite to say that I felt God calling me to take this job, but that’s exactly how I felt. My years as a homeschooling mom had come to an end when my youngest began high school, and I’d been praying that God would open the door to some meaningful work. The door opened when I opened that e-mail.

It also sounds trite to say that a whole new world opened up for me, but this, too, was the case. As a regional correspondent, I attended all sorts of events I wouldn’t otherwise have attended, from annual general meetings, pastoral gatherings and book launches, to cake auctions, folk festivals and fashion shows. If the event was sponsored by Mennonite Church Saskatchewan, or in some way involved the good people of my regional church, I was there with my notebook and camera in hand, taking notes, taking pictures and taking it all in.

My favourite story subjects, however, were not events, but people—women and men of all ages, interests and perspectives living out their faith to the best of their abilities in their own particular contexts:

“I believe God reveals himself through nature,” said Driediger. “Millennia before the Bible came to be, that’s how people found out about God. They looked,”

God revealed himself to Wayne and Carry Dueck through the 32-hectare parcel of land they purchased in the early 1980s. In 2019, I spent a wondrous morning with them at the property northwest of Duck Lake known to them simply as “The Land.”

When the Duecks bought the land, they intended to preserve its natural state but also add trees. In the years that followed, Wayne, their sons and many friends planted thousands of coniferous trees.

Carry told me that she sees “planting trees as a route to reparation, a way of making amends for the damage we have dealt to the natural world.”

“Efforts toward reconciliation can be very messy and complex,” he said. “Many times we didn’t get things right.” But he had the patience and took the time to make things right. Reflecting on those years, he said, “I often felt in over my head, but I trusted that God had brought me there for a purpose.” Doell’s patience and faith in God inspire me.

I wrote Neepin’s faith story for CM in 2019, when he was 86 years old. “God can help me every day as long as I’m willing to believe in him,” Neepin said. “And I pray every night and every morning for guidance.”

I agree with Driediger that God reveals himself in nature, but I also see God revealed in the lives of God’s people: people like Driediger, Wayne and Carry Dueck, Leonard Doell, Wes Neepin, and Elaine Presnell. It has been a privilege and a joy to share their stories, and so many more, with you these past eight years. 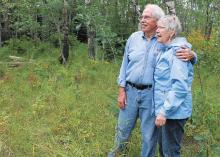 Wayne and Carry Dueck, pictured in 2019, enjoy the fruits of their labours on ‘The Land,’ where they planted thousands of coniferous trees over the years. (Photo by Donna Schulz) 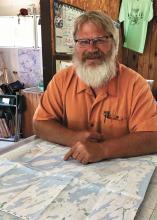 Ric Driediger is pictured in his office at Churchill River Canoe Outfitters, where he loves to hear about people’s encounters with God while canoeing. (Photo courtesy of Ric Driediger) 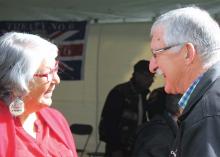 Leonard Doell, right, converses with Chief Sylvia Weenie at the 140th anniversary of the signing of Treaty Six, held at Stoney Knoll in 2016. (Photo by Donna Schulz) 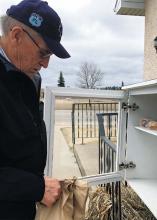 Wes Neepin places bag lunches in the pantry box in front of Grace Mennonite Church in Prince Albert in 2017. (Photo by Donna Schulz) 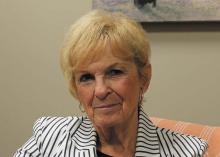 Elaine Presnell is pictured at her workplace, Mourning Glory Funeral Services, in Saskatoon, in 2019. (Photo by Donna Schulz)

Thank you Donna for offering your gift of writing to help connect and inspire Mennonites across Canada. I always appreciated reading your articles. You will be missed!