‘That school kit saved my life’ 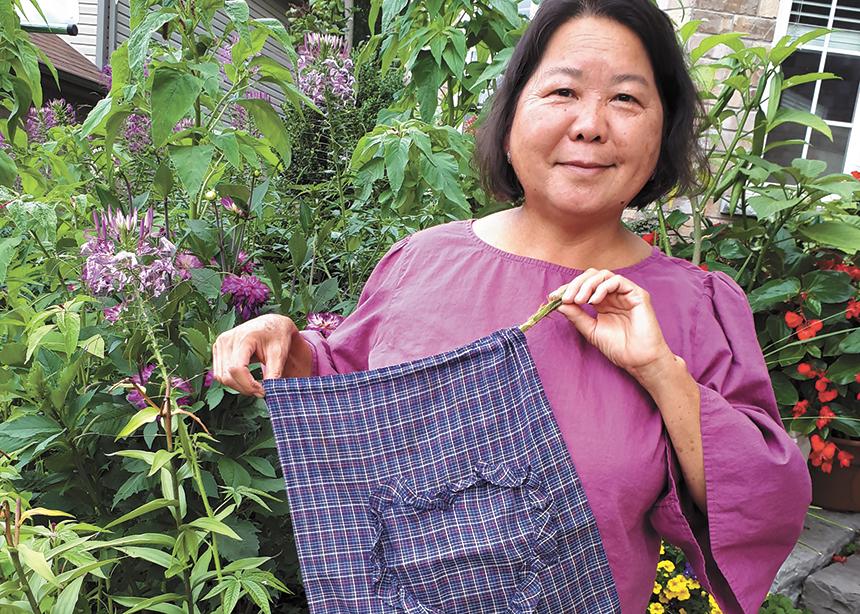 Ly Vang holds the MCC school kit bag she received as a teenager in a refugee camp in Thailand. ‘If the person who made this is still alive,’ she says, ‘I would like to say thank you.’ (Photo by Janet Bauman)

Ly Vang was 16 and stuck in a refugee camp in Thailand with a pair of shoes and two sets of clothes. She was lonely and sad. She struggled with suicidal thoughts.

“What is the meaning of living like this?” she complained to God. “Being dead would be better.”

One day, though, she noticed a crowd of people around some white visitors who were handing out something. She came closer, pushing forward in the line until she received a small cloth bag with a heart sewn on the front. Inside were two notebooks, an eraser, pencils, pens and a ruler. Her life changed in an instant.

“That school kit saved my life,” Vang says now. “It saved my faith.”

She started to write songs and Bible verses in the notebooks. Soon other people in the camp asked her to write letters for them, as they tried to find lost relatives. She wrote so many letters that her fingers were sore, and she divided the lines with the ruler so she could write smaller and save paper!

“When I received the school kit, I received a ministry,” she says. “I felt alive again, useful. . . . I remembered God again.”

It wasn’t until 20 years later, after she was resettled in Canada, that Vang made the connection between the school kit she received and the Mennonites who supported her Hmong people as recent arrivals in Canada.

She credits the Mennonites for being “willing to hold us . . . like an egg . . . willing to incubate and support us. . . . They helped us find a place to worship, initially in Baden, and then at First Mennonite in Kitchener. . . . The way we received care and love from Mennonites . . . made us want to be Mennonite,” she says.

In 1996, First Hmong Mennonite Church bought a building of its own. Vang has been involved from the beginning, leading the youth, offering women’s Bible studies and providing translation services.

Wanting to encourage the youth to serve others, she took them to the local Mennonite Central Committee (MCC) warehouse to volunteer. Their job was to pack school kits. That’s when she realized the school kit she received so many years before was from Mennonites.

As soon as she got home, she searched through her things and found the bag. She calls it “my miracle bag of life, adding, “I was so poor when I came to Canada that all I carried fit into that bag.”

Vang continues to be inspired by the work of MCC. It is “the Word become flesh and alive within us,” she says. People can learn so much about the Bible, but she stresses that “the word needs to become flesh.”

In Canada, Vang married and raised five children. In that time she also graduated from a business administration program at college. She is now a grandmother and lives in a multi-generational home. She serves on the mission and prayer teams, and teaches adult Sunday school at First Hmong.

Recently she was invited to serve as a Mennonite Church Eastern Canada representative on MC Canada’s Joint Council, the board that oversees the mission of the nationwide church. She was surprised to be nominated but she has learned to say “Yes, Lord” when God calls. “God plans ahead. I just follow along,” she says, seeing this as another opportunity to serve God’s family.

When she dreams about the future of MC Canada, an image from the Book of Revelation sticks in her head. “I see many nations, names, tongues and tribes worshipping God on Earth,” she says.

Clutching the school bag she received nearly 40 years ago, Vang reflects back on her journey of faith with deep gratitude. “I appreciate life every day,” she says. “God is just an amazing God. God gets me through.” 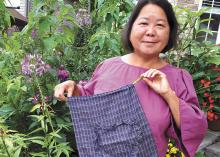 Ly Vang holds the MCC school kit bag she received as a teenager in a refugee camp in Thailand. ‘If the person who made this is still alive,’ she says, ‘I would like to say thank you.’ (Photo by Janet Bauman)

What a powerful impact that simple school kit had on this woman. Seems that this project of the CM was in the right place at the right time, which is a 'God-thing'. This article affirmed for me that doing small things to help others matters, that God honours acts of kindness when they are done to bring glory to Him and to help our fellow humans. We all bleed, we all love and die, so why can't we all be kinder? We are created to be made in the image of God. Affirmation, love, forgiveness and compassion are qualities needed so desperately in our communities. Let's all work at doing acts of kindness and compassion every day, as an offering to our Heavenly Father and a helping hand to others in need.