Conversations mirror and shape the church 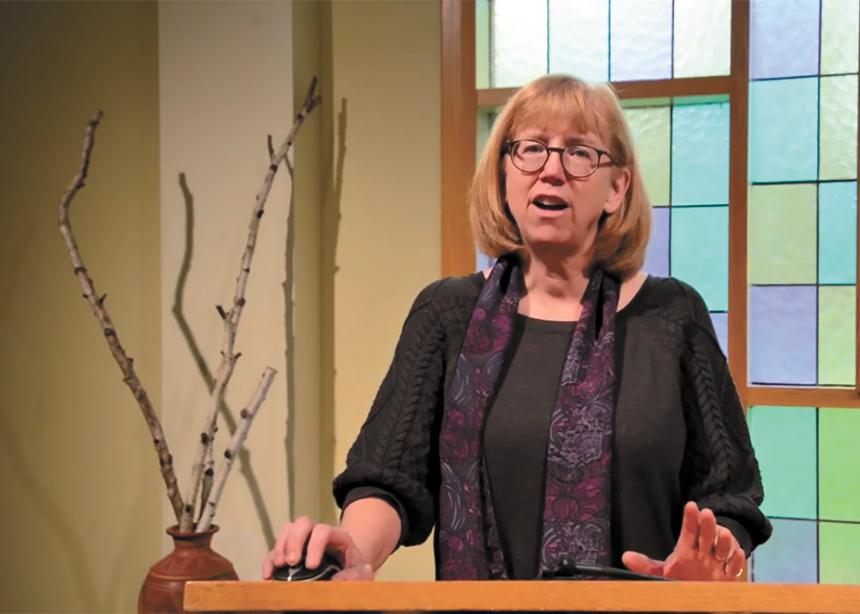 In her recent research Carol Penner surveyed how the church periodicals, Gospel Herald, The Mennonite, and Canadian Mennonite reported on sexual violence from 1970 to the present. What she found became the subject of the annual Benjamin Eby Lecture, which features research of a Conrad Grebel University College faculty member.

Penner is an assistant professor of theological studies at Grebel. Her November 12 lecture, entitled “#MennonitesToo: Sexual Violence and Mennonite Peace Theology,” was delivered virtually to around 170 people. Since then, more than 600 people have watched the recording.

While Mennonites have had five hundred years to wrestle with their peace theology, Penner noted that discussions about sexual violence have taken place only in the last fifty years. She asked, “What does it mean to be people of peace when sexual abuse and assault is woven into the fabric of our own communities?”

Penner’s research showed that, over that time, the periodicals showed a gradual increase in discussion of abuse, with coverage spiking in the 1990s and then tailing off again, until recently. There was more content in American periodicals, until the last decade.

She suggests that church periodicals are “helpful barometers to measure theological opinions,” acting as a “mirror that allows us to know ourselves” and serving to “shape the church more than academic writing, because they are more widely read.”

Penner shared three observations from her research. First, she found that storytelling is important as a way to “name what is actually happening.” Accounts of abuse in the 1970s were vague, but by the late 1980s first-person stories started to appear. Written mostly by women, they reflected the isolation, shame and self-blame experienced by survivors of abuse. “No one was willing to walk with me,” reported one survivor. The church’s response was most often to deny or minimize what happened.

Most controversial was what Penner called a “flurry of stories” in the 1990s about church leaders who perpetrated abuse. Some people said it was terrible to make them public, while others insisted that the truth should come out. Editors eventually created guidelines around publishing such accounts, naming that “pastoral misconduct is not just a story between two people. It is a violation of public trust in the church, and silence only leads to more victims.”

Second, Penner observed that writers began to use social analysis to look at the dynamics of power. “They named patriarchy as a problem,” she said, and they addressed deficiencies in Mennonite peace theology. One person wrote, “A peace of silence is an unjust peace.” Another wrote, “We cannot continue to teach a hierarchical model of men and women.”

Penner observed “lots of backlash” to the discussion of patriarchy through attempts to defend male headship and female submission as biblical, and attempts to discredit feminism as “secular and ungodly.” She noted that recently there has been less discussion about patriarchy.

She asked, “What happens to the movement for social change if we are reluctant to talk about power?” She added, “Social analysis is essential in order to address inequality.”

Third, Penner said reporting on abuse in the church press forced a theological discussion within the church. Big questions were raised like: Where is God in these stories? and How does the reality of sexual violence shape our understanding of God? Women scholars engaged with biblical texts about abuse and showed how scriptures about reconciliation could be misused.

Just as interesting to Penner was “looking into the margins’” to see what was not being reported in the church press over those fifty years. She observed that there was very little practical help for survivors of sexual assault, and “almost nothing that addresses the people that are doing the violence.” She encourages the church to challenge “societal training that normalizes violent behaviour for men.”

Also missing was discussion about how sexual violence interacts with other “webs of oppressions.” She notes that people from LGBTQ+, newcomer and BIPOC communities as well as people with disabilities and economic disadvantages are most likely to be hurt and least likely to be able to access good medical care or fair treatment by the justice system.

Finally, she says the press has not addressed the abuse of LGBTQ+ people in the Mennonite church, resulting in much suffering and deaths by suicide. Rejecting, expelling and forcing them into heterosexual moulds is “a type of sexual violence” that uses “spiritual and community power in oppressive ways.”

Penner says, “You can’t work on something if it’s not talked about.” But online advocacy brings her hope today. “Patriarchy works when victims are isolated and silenced, she says, but the internet has “slashed through that silence,” allowing people to share their stories and find networks of support. 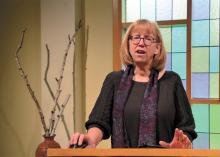 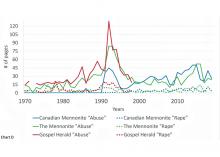 Data from Carol Penner’s research into the coverage of sexual violence in Mennonite church periodicals shows a flurry of stories in the 1990s. She presented these and other observations at the 2020 Benjamin Eby Lectures at Conrad Grebel University College. (Screenshot by Janet Bauman)