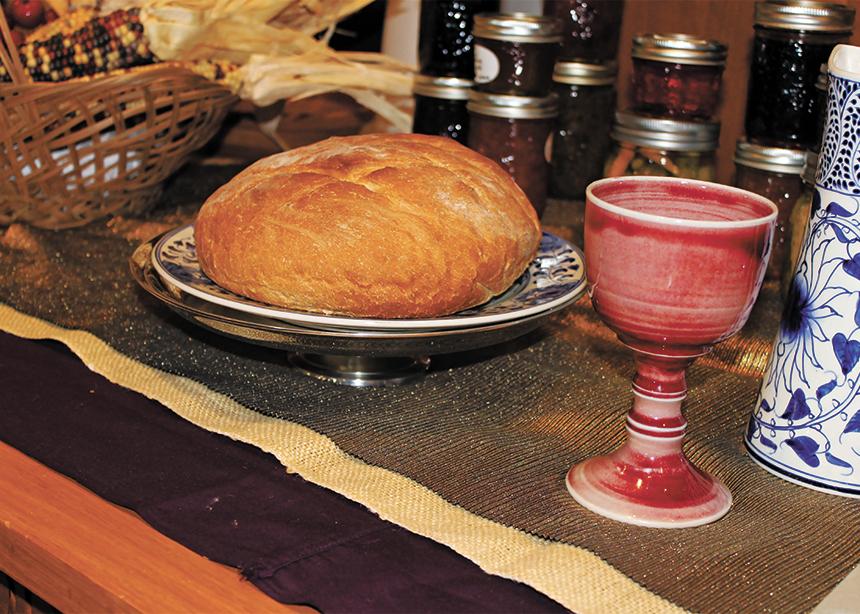 When Christians partake in communion they are asserting the Lordship of Christ. This takes on added significance on election day. (Photo by Donna Schulz)

Attending a communion service on election day is not at the top of most voters’ priority lists, but for those who gathered at Mount Royal Mennonite Church on Sept. 20, it proved to be the right way to start the day.

Garth Ewert Fisher, who is co-pastor at Mount Royal Mennonite, became intrigued with the idea of holding communion on election day in 2019, just after the previous federal election had been called. It was then that he came across an article about election day communion services in the United States. What began as a single service grew into an ecumenical movement encompassing over 900 churches.

Ewert Fisher decided to plan a communion service for his own church in 2019, but he extended the invitation to other Mennonite Church Saskatchewan congregations as well. That year worshipers came from as far away as Osler and Rosthern to attend.

When this year’s federal election was called, Ewert Fisher invited Saskatoon’s other MC Saskatchewan congregations to help with the planning. Phyllis Goertz, of Wildwood Mennonite, and Patrick Preheim, of Nutana Park Mennonite, joined Ewert Fisher in organizing the service.

About 20 people attended the 7:00 a.m. service, which included an instrumental prelude and postlude, Scripture readings, prayers and communion. Each participant received a pre-packaged container with a communion wafer on top and a small cup of grape juice beneath, in keeping with pandemic safety protocols.

Len Rempel says he wasn’t quite sure what to expect of the experience. Having recently moved to Saskatchewan to serve as pastor of both Warman and Pleasant Point Mennonite Churches, Rempel at first thought that attending the service would be a good opportunity to make connections with people.

“A communion service is a good way to connect with people as well as with God,” he says, “but in terms of the election, it kind of felt appropriate to begin that day with communion. It kind of centred things for me.”

Rempel says that a service of this kind can bring together people who hold different political views, offering them “an opportunity to make a profound statement that as followers of Jesus Christ we have that allegiance first and that supersedes any other allegiance.”

Ewert Fisher agrees. “One of the key tasks of the church is to keep reminding ourselves what citizenship and what the Lordship of Christ really means,” he says.

The election-day communion service was a first for Goertz, but she says it was a positive experience.

“I think it helped centre me on the important things in life and reduced my concern about how the election might turn out,” she says.

Preheim echoes her thoughts. “When we gather as the people of God for a worship service on an election day, I am reminded of my citizenship in God’s house,” he says. “This reality, and being given space to reflect on it, strengthens me to hold the results of an election more gently.”

Preheim led worshipers in the prayers of the people, asking God:

“Whoever the ‘other’ is in this election,” says Preheim, “I am invited to treat all people with respect and live into Christlike integrity.” He adds, “Coming together to remember these pieces of our spiritual identity is good for us, particularly on election day.”

Ewert Fisher says the communion service was an opportunity to “remind ourselves of our unity and how that transcends politics.” He valued being able to host the service jointly with colleagues from other churches and says he will definitely plan another such service when the next election rolls around.

Rempel also appreciated the opportunity and plans to participate again next time.

“So much of what we hear in a political campaign is criticism of other sides,” he says. “Campaign ads are meant to divide people. We may be different and we may disagree on things, but [the] Lordship of Christ takes precedence over everything else.” Rempel adds, “We call Jesus Lord. That’s a much higher calling than prime minister or member of parliament.” 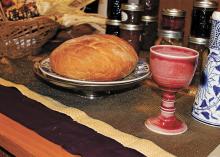 When Christians partake in communion they are asserting the Lordship of Christ. This takes on added significance on election day. (Photo by Donna Schulz)