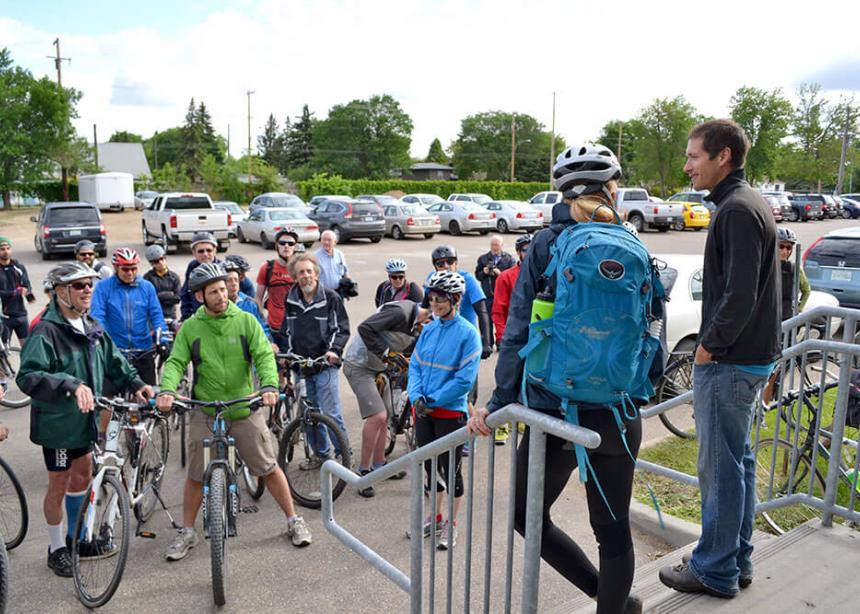 <p>Organizer Rachel Regier explains the goals of Pedal for Peace to about 40 participants. (Photo courtesy of MCC Saskatchewan)</p>

Before they ate their fill of rollkuchen, watermelon, farmer’s sausage and other traditional Mennonite food, a group of Saskatchewan Mennonites cycled 43 kilometres in solidarity with those who have to leave their homeland in search of peace.

The first-ever Pedal For Peace took place at the Mennonite Central Committee (MCC) Saskatchewan relief sale on June 13. The purpose was for participants to travel by bike the same distance many Syrian refugees travel to seek safety. Forty-three kilometres is the distance from the Syrian capital of Damascus to the border of Lebanon.

Rachel Regier, 30, who attends Nutana Park Mennonite Church in Saskatoon helped organize the event. She explains that the theme of the relief sale was refugees and displaced people, and both Pedal for Peace and the relief sale dedicated the money raised towards MCC’s work in that area.

Regier says Pedal for Peace was a way for people who may not know much about refugees to reflect on the struggles people face.

“In Canada, the picture we have of refugees is people from the other side of the planet coming here where it’s safe. Often they’re only 43 kilometres from their home,” Regier says. “That distance is keeping them from the life they would live if they could just be back home.”

The ride was also a way for cyclists to understand just how enormous the issue is. Globally, there hasn’t been this number of refugees since World War Two.

Along with cycling 43 kilometres, participants visited information booths along the journey to learn more about Syrian refugees.

For Regier, it was important to educate herself and others about refugees. But she also hopes it’s a way to stand in solidarity with them.

“One of the stories I read from refugees was saying how simple things like receiving relief kits that MCC donates to people. It’s more than just a towel and a bar of soap,” Regier says. “Even though you feel alone, you aren’t alone.”

She says approximately 40 riders raised about $1,000 to support MCC’s work with refugees. Although it isn’t enough to support the millions of refugees, Regier says it’s a symbol of the group’s commitment to pray for and support refugees.

“Even if you’re just raising a small amount of money, it’s a symbol that you’re on the same team,” Regier says.

The MCC Saskatchewan relief sale raised more than $110,000 over the weekend to support its work with displaced people and refugees. MCC’s response to the Syrian conflict, which is still ongoing after five years, has surpassed its response to the 2004 tsunami in the Indian Ocean.

For more stories on Mennonites and Syrian refugees, see:

Welcome to Canada . . . because of Jesus

Organizer Rachel Regier explains the goals of Pedal for Peace to about 40 participants. (Photo courtesy of MCC Saskatchewan)