Blacks and Mennonites have been good neighbours in Saskatchewan 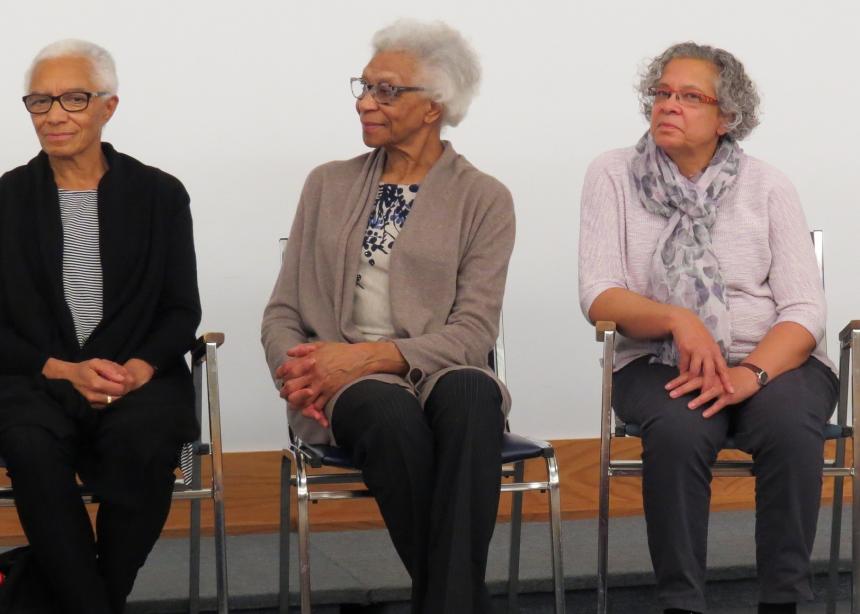 Pictured, from left to right: Carol LaFayette, Vera LaFayette and Ruby LaFayette participate in a panel discussion at a ‘peace event’ hosted by the Mennonite Historical Society of Saskatchewan on Nov. 12. (Photo by Susan Braun)

A presentation by Timothy Epp on the enduring relationship between blacks and Mennonites quickly morphed into a time of sharing and storytelling by members of the two communities during this year’s annual Mennonite Historical Society of Saskatchewan “peace event,” held on Nov. 12, 2016, at Saskatoon’s Bethany Manor.

Epp, an associate professor of sociology at Redeemer University College in Ancaster, Ont., has had his research featured in various publications, including a recent issue of the Saskatchewan Mennonite Historian. Born in Rosthern, Sask., Epp entitled his presentation, “Roots and routes: Blacks and Mennonites in Canada.”

He began his talk by noting that Mennonites and blacks were neighbours in Germantown, Pa., as early as 1688, and some of those Pennsylvania Mennonites had helped blacks escape to Canada via the Underground Railroad in the late 18th and early 19th centuries. He said that blacks had proved to be capable farmers among the Mennonite farmers of Upper Canada during that period.

At first, Epp thought this was a unique but small episode in Mennonite history, but then he made some connections to people from Saskatchewan, particularly Berny Wiens, who reported that he had grown up with blacks in the area around Herschel and Fiske. Wiens introduced Epp to his friends from the large, extended LaFayette clan. Then the contacts began to snowball. Even before the meeting, Epp met people who told him that they had also grown up with blacks in their communities at Aberdeen, Glenbush and Blaine Lake.

A good turnout of about 150 people listened intently to the stories Epp told in his presentation. When he finished, a panel of guests including Wiens, two LaFayette sisters, Carol and Vera, and their cousin Ruby.

Instead of just answering questions, however, this turned into an interesting storytelling session by the panellists and audience members.

Tina Siemens from Fiske recalled teaching seven of the LaFayette children in school and greeted them as good friends. A woman from Drake held up a small photo album that had been her mother’s and included pictures from her mother’s summers teaching Vacation Bible School in these communities and staying as a guest of Grandma Mayes, a well-known and loved midwife in the area.

As the afternoon wore on, the event felt like a family reunion. The historical society’s board members, Dick Braun and Leonard Doell, let it go on longer than planned, inviting everyone to continue their visiting informally. 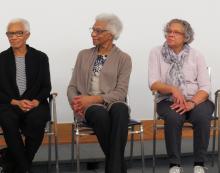 Pictured, from left to right: Carol LaFayette, Vera LaFayette and Ruby LaFayette participate in a panel discussion at a ‘peace event’ hosted by the Mennonite Historical Society of Saskatchewan on Nov. 12. (Photo by Susan Braun)