‘It’s going to take all of us’ 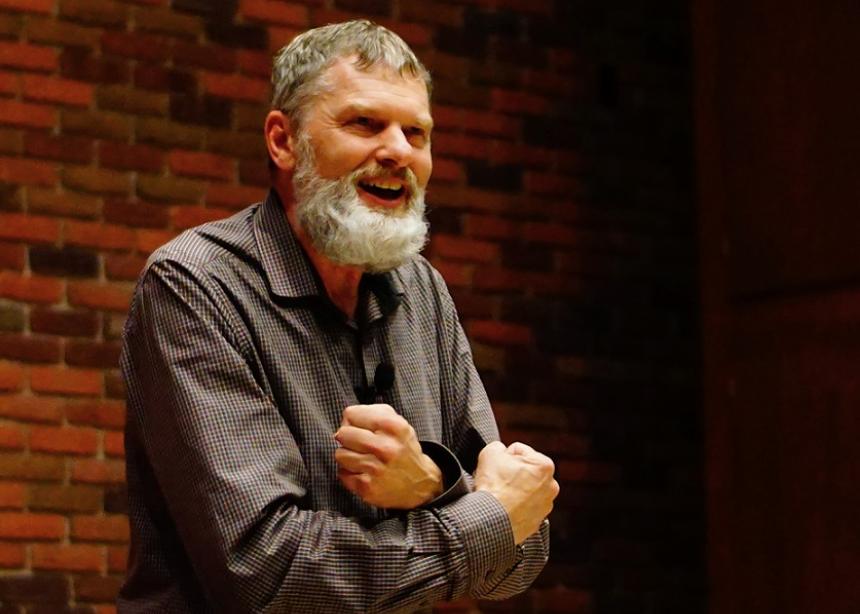 As the floodwaters of Hurricane Florence crested in South Carolina in late September, three keynote speakers at this year’s Rooted and Grounded conference on land and Christian discipleship at Anabaptist Mennonite Biblical Seminary (AMBS) told participants that shifts in the dominant western belief systems and priorities would be needed for people to live in right relationship with God’s creation in the present climate crisis.

Deconstructing a western worldview
Randy Woodley is an author, activist/scholar, wisdom keeper and American Baptist minister, who is a legal descendant of the United Keetoowah Band of Cherokee Indians in Oklahoma. He asked his listeners to stand and face the four directions with him as he sang in an Indigenous language, “Creator, when you look down on me today, have pity on me and remember I’m just a human being.”

He wove traditional Indigenous stories and humor throughout his message as he invited participants to consider flaws associated with a western worldview as well as the theological possibilities that an Indigenous worldview offers.

Noting that “the winners always write history,” Woodley cited John Mohawk, who wrote that distorted and even dishonest renderings of the past are found in many modern accounts of ancient peoples and contemporary “primitive” peoples. These views reinforce the sense of difference between modern people and those who have come before, and distance them from unflattering legacies from the past.

Quoting Robert Francis, Woodley spoke of the effects of colonization, which has its roots in “theology that serves to raise the colonizers above those to be colonized.”

“When a people develop the idea that they have exclusive possession of communication from God and exclusive control of the means of salvation, all the peoples of the earth stand in peril,” he said, still quoting Francis. “So an alternative to colonial religion requires a different foundation.”

Woodley spoke of an aha moment in the early 2000s, when he and Edith, his wife, were leading a pilgrimage along the Cherokee Trail of Tears and reading Walter Brueggemann’s writings on shalom. He realized that the Cherokee had a similar concept—eloheh—and began researching different tribes’ names for shalom, eventually writing his doctoral dissertation on the subject: “The harmony way: Integrating Indigenous values within Native North American theology and mission.”

“I called it ‘the harmony way’ because it encompassed everything,” Woodley said, and named 10 core values he found were shared widely among 45 Native American tribes across the U.S. and Canada:

Noting that belief in “the Indigenous problem” is still present in the western psyche, with Indigenous peoples being blamed for not accepting the terms of their colonization, he identified several characteristics of the Western worldview that he sees as problematic as well as un-Christian:

He said he sees dualism as creating a disembodied theology and resulting in binary thinking: “It’s the belief that God is at work in the church more than God is at work in the world. It’s either right or wrong, legal or illegal, heaven or hell, sin or holiness, success or failure, civilized or primitive, saved or lost.”

“It makes it difficult for Western thinkers to hold two seemingly incompatible things in tension without having to find resolution,” he continued. “This is part of a false assumption that everything can be understood and every problem can be solved. But we might be at the place where we can’t solve it anymore—the political problem, the race problem, the Earth problem.”

For Woodley, the way to counter the misunderstandings that he believes Christians have developed of Jesus and his shalom kingdom, of their duty to the marginalized and of the very nature of God, is both structural and relational. It involves western thinkers deconstructing their worldview; understanding Jesus as the cosmic creator and God as restoring harmony and shalom to all creation, not just humans; viewing the stories of Jesus through a local, Indigenous, place-based theological lens; allowing themselves to be vulnerable and to learn from the cultural “other”; and understanding their equality and interconnectedness with creation.

It also involves education of the dominant culture. “A more Indigenous viewpoint has direct implications for how we live our lives, how we understand our salvation and healing, and how we go about doing mission,” he concluded. “It’s going to take all of us.”

Challenging existing value systems
Karenna Gore, founder and director of the Center for Earth Ethics at Union Theological Seminary in New York City, focussed on what she sees as two of the root causes of climate change. First is the belief that humans are separate from, and superior to, the rest of the natural world, which, she said, “is so pervasive and secularized that often we don’t even detect it . . . as though nature were a kind of backdrop.”

She referenced Luke 12:56-57,  where Jesus says, “You hypocrites, you know how to interpret the appearance of earth and sky. Why don’t you know how to interpret the present time? And why don’t you judge for yourselves what is right?” then pointed to the signs: stronger and more frequent storms and floods, heat waves, droughts, wildfires, melting Arctic ice, rising sea levels, climate refugees, and extinctions that also threaten global food supplies.

The second cause Gore named is the economic growth paradigm that values short-term monetary gain, no matter how inequitable or destructive, and the associated “externalization of costs.” She cited warnings against greed, quoting Matthew 6:19-21, and a passage from Dietrich Bonhoeffer’s Cost of Discipleship about the accumulation of material wealth creating a barrier between oneself and God.

“We should not underestimate the importance of recognizing spaces for Christian witness in this time, because the aggregate effect of all of these projects all over the world in which corporate rights are held over community rights is the destruction of the livability of the planet,” she concluded.

Honouring the interrelatedness of all creation
Valerie Bridgeman, dean and vice-president for academic affairs at Methodist Theological School in Ohio, chose to focus on Job 38, in which God responds to Job’s prayers and questions with a series of questions, all related to aspects of creation, from the recesses of the deep to the constellations in the sky.

She shared stories, including one of learning about medicinal plants from Makota Valdina Pinto, a Brazilian historian, herbalist and healer, while studying the varieties of black religious experiences, as a way of reflecting on these questions.

Her day with Pinto evoked memories of her mother’s mother, also a traditional healer, who Bridgeman described as being “in synergy with the earth and with all creation.”

“If only we would remember that we are companions on the earth; we are not merely caretakers,” she said. “The earth is also our caretaker, if we would but pay attention. There are roots and leaves that do not need to pass through pharmacology to heal us.”

Bridgeman continued to examine society’s perceptions of the earth, raising the influence of perspectives on gender as she shared, “A friend says to me, ‘Perhaps we don’t treat the earth well because we call her Mother. . . . How can we speak of care for the earth when we cannot . . . be safe as women? No wonder Mother Earth is not safe. . . . We rape her of resources and destroy her breath by the emission of gases into the atmosphere.’”

She concluded by quoting John Kilzer, a blues musician and Memphis pastor, who once said, “If you’re not living on the edge, you’re taking up way too much space.”

Recordings of the keynote speakers are available online at soundcloud.com/followambs. 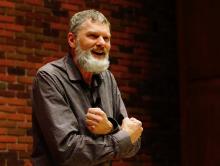 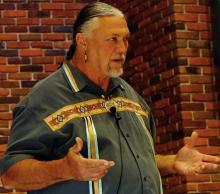 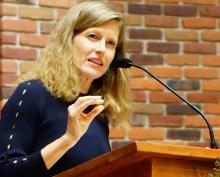 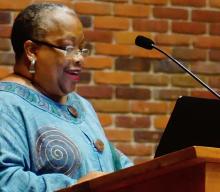