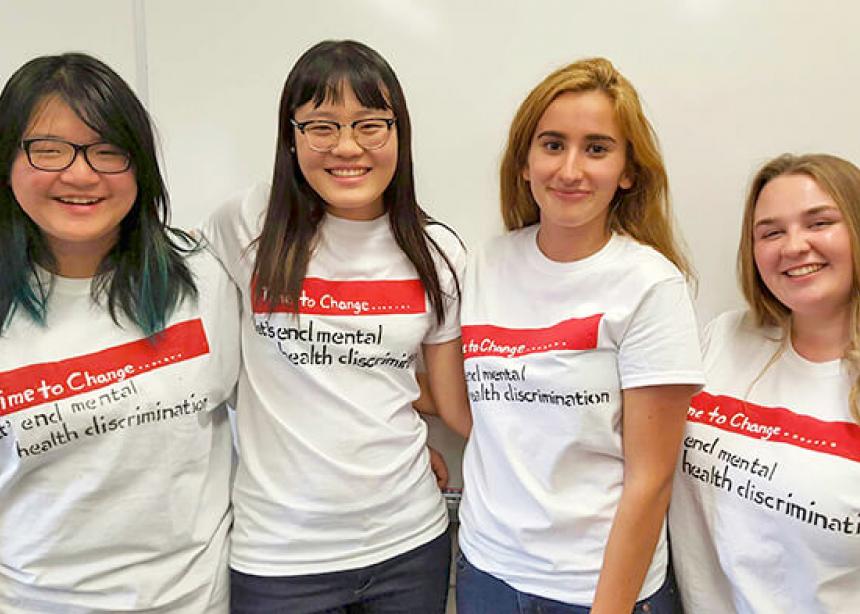 Four Grade 11 students at Rockway Mennonite Collegiate have taken an innovative approach to a class project, and it has been making a difference in their community and beyond.

As part of a unit on mental health, Tara Vojinovic, Abbey Young, Veronica Li and Hanna Liu were given the assignment of somehow helping to reduce the stigma around mental health challenges. In response, they created a social media campaign entitled “Stop Stigma” that went around the world. Averaging 77 new followers a day, their campaign garnered more than 500 followers on Twitter and Instagram in just a few weeks.

“Stop Stigma” posts consisted of important facts about mental illness, as well as encouraging statements, videos and photos. Every post was geared to educate and empower those dealing with mental health challenges. They attracted followers from many countries, including the United Kingdom, India, France and Spain.

“Much of their material came directly from our course notes,” says Sara Wahl, their human behaviour class teacher. “It was exciting to watch them apply their faith and learning in the real world, and to have such an immediate impact.”

Mental health was also the focus of this year’s Spiritual Emphasis Week at Rockway, a time where the school community intentionally focusses on a topic that is salient to the student body. During this week, an off-campus speaker provides input for three extended chapels, class visits and a parent session. This year’s speaker was Dr. Melissa Hofstetter, a clinical psychologist and licenced therapist. A highlight of the week was the evening parents session that provided a unique opportunity for parents and constituents to dialogue together. The week also provided students with the opportunity to explore mental health through biblical study as well as through practical education and discussion.

While their class project has now officially ended, the “Stop Stigma” team members plan to continue with their campaign.

“It’s been very rewarding,” says Tara. “It grew beyond what we ever expected!”

“Stop Stigma” can be followed on Twitter at @Stampout_stigma. To learn more about the campaign, visit rockway.ca.