‘Chain of memory’ links past, present and future of ‘pioneering’ school 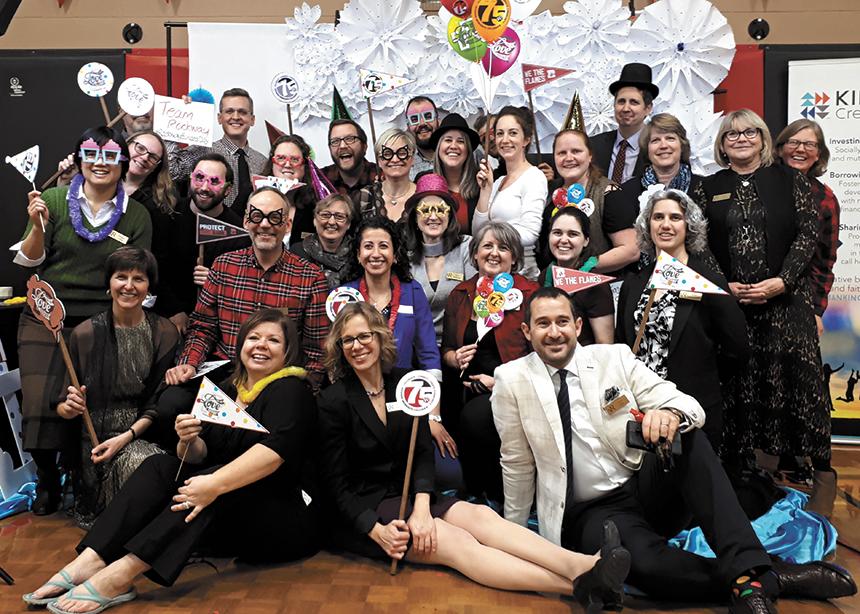 Current faculty and staff pose at the photo booth as part of the festivities celebrating the 75th birthday of Rockway Mennonite Collegiate. (Photo by Janet Bauman)

There was cake, balloons, confetti and a photo booth with goofy props. There was singing in harmony, and prayers of gratitude and blessing—all of it to celebrate the 75th birthday of a “small school for a big world.”

Rockway Mennonite Collegiate in Kitchener marked the milestone with a Founders’ Day Chapel designed to celebrate its legacy and look to the future with hope, on Feb. 9.

From its humble beginnings in a renovated farmhouse and barn in 1945, Rockway grew and changed, while staying true to its founding tradition, according to Ann L. Schultz, current principal, former teacher and 1984 graduate. In the shadow of the Second World War, Mennonite leaders wanted to create “an alternative to mainstream education,” emphasizing peace and the life and teachings of Jesus, while creating a space where academics, community and friendships could thrive,” she said.

The Founders’ Day Chapel centred on the themes of celebration, connection and community found in Colossians 3:12-17.

Sarah Kathleen Johnson (class of 2003), was the guest speaker. Johnson is a current doctoral candidate at the University of Notre Dame and serves on the editorial team for Voices Together, the new Mennonite hymnal and worship book.

Johnson invited the audience to consider what it means for Rockway to be a Mennonite school in 2020 and beyond. She named two ways Mennonite identity is usually understood—through ethnicity, and through lists of theological distinctives—neither of which is adequate for 2020.

She argued that, while ethnic identity “is a heritage to celebrate . . . the Mennonite church has changed” and now worships in 25 languages across North America. She challenged Mennonites to move beyond “superficial multiculturalism” to become deeply “intercultural,” by practising “genuine engagement.”

She also said that creating lists of distinctive core values can be inspiring, “but it is dangerous to define who is and is not Mennonite this way.” Because religion and values are always contextual, “these lists do not describe the breadth of who we are as Mennonites today.”

Instead, she asked, “What if being Mennonite is about belonging to a chain of memory—about claiming connections to a past, a present and a future that we share.” Tradition, in this sense, is dynamic, always changing and adapting, she said.

She described how the story of Rockway stretches back through centuries of Mennonite and church history, and will stretch forward as each new generation adds to the chain of memory and is changed by it.

She recalled being a student at Rockway on 9/11, noting that, at that difficult time, it was good to be part of a place “connected to a chain of memory that says, ‘Do not respond to violence with more violence . . . there is hope even when it seems like everything is falling apart.’ ” She said, “I don’t know what your 9/11’s have been or will be,” but “this is a good chain of memory to be part of when they happen.”

Johnson acknowledged that Rockway’s legacy is messy and far from perfect, but by living with gratitude, compassion and love, people can create a chain of memory that sends Rockway into the future with hope.

Congregational hymns for the celebration were chosen from the soon-to-be-completed Voices Together collection. There was also an Alumni and Friends Choir, conducted by Shultz, that opened with an anthem of praise and closed with a call to be faithful.

A model of an art installation for the school’s courtyard was unveiled. The collaborative work, called “Serenity,” will feature some found objects reflecting Rockway’s roots on a farm property, as well as large rocks, water and indigenous plantings. The vision is to create “a serene outdoor meditation space” where students can connect to the natural world.

The event also featured stories from alumni, including Mary Groh (class of 1949), whose father, Harold Groh, was the first principal of the school. She described Rockway as “a pioneering school” with a “humble opening” in two renovated bedrooms in the old farmhouse on the property.”

Groh recently made a donation to the school so more students can experience a Rockway education. Her gift inspired a matching Diversity Award from the congregations of Mennonite Church Eastern Canada to support students from the regional church’s first-generation Canadian congregations. A highlight of the 75th birthday celebration was an announcement by David Martin, MC Eastern Canada’s executive minister, of a further $250,000 grant to provide financial support for these students to complete their high-school education at Rockway. This, in turn, sparked a year-long fundraising campaign at Rockway to raise an additional $270,000.

As the service of celebration ended, there was time for birthday cake, a stop at the photo booth to make new memories, and an opportunity to look through old yearbooks in the long chain of memories. 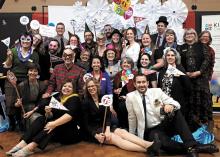 Current faculty and staff pose at the photo booth as part of the festivities celebrating the 75th birthday of Rockway Mennonite Collegiate. (Photo by Janet Bauman) 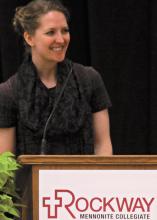 Jane Schultz-Janzen, left, Patty Klassen and Marcia Shantz, all from the class of 1981, joined the Alumni and Friends Choir that sang at the Rockway Mennonite Collegiate’s Founder’s Day Chapel on Feb. 9, celebrating the school’s 75th birthday. (Photo by Janet Bauman)