A rich and diverse version of God 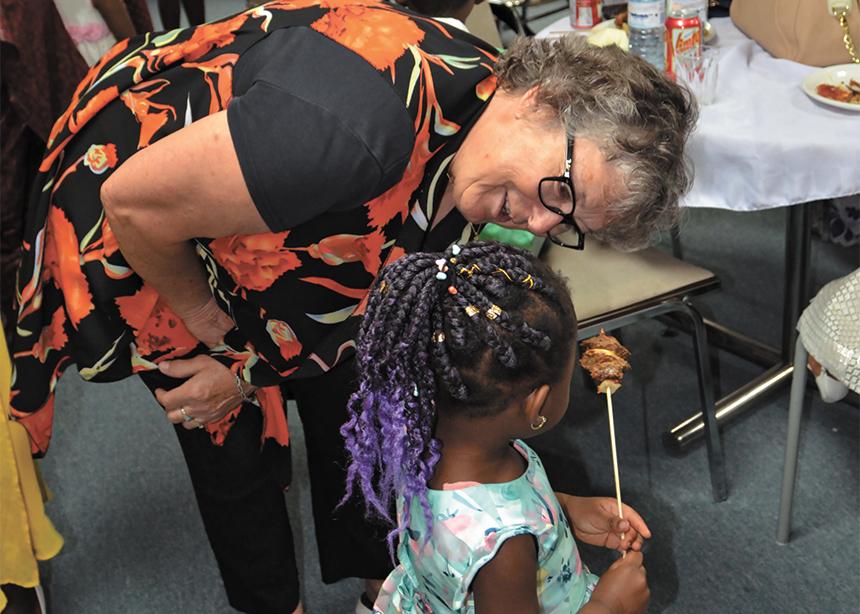 Presumably, the same has applied to Canadian churches as well. Now some congregations in Mennonite Church Canada, actively seeking to integrate more than one culture into congregational life, are indicating that racial and cultural separation in church life does not have to be so.

Blending participation in worship services, involvement in church leadership and church community life, and different understandings about how church operates are all affecting not only how these congregations function, but also helping them evaluate and reimagine their very identity.

Fanosie Legesse, intercultural mission minister for MC Eastern Canada, encourages a broader definition of intercultural churches that encompasses more than a white European culture church integrating another culture into itself; rather, people of both or all groups journey together to forge who they are as a congregation.

“Churches of different nations and cultures are encountering each other and they are just starting to open their doors to learning and teaching one another,” Legesse says. “They are working hard to discern the opportunities and challenges of journeying together. The biblical intercultural church, and the one we are stretching to realize, calls for humility in relation to power, wealth, fame and other factors that put one culture in a dominant position.”

Until the past year’s pandemic, all three groups have taken part in an annual retreat at Camp Squeah, a church Christmas banquet, and an outdoor fall festival for their neighbourhood. A church-sponsored food bank for international refugees is another joint venture.

Combining the different traditions at Sherbrooke has evolved over time. A history of welcoming past immigrants from Russia, Germany and South America has helped long-time members be open to welcoming more recent ones.

“Through the years, there have been various iterations of how we’ve related with both the Vietnamese and the Korean group,” recalls Garry Janzen, a former Sherbrooke pastor who is now executive minister of MC B.C. “We’ve had various music leaders who would try to do [music] together, with all four languages up on the screen: Vietnamese, Korean, German and English,”

While the Vietnamese members meet as a separate congregational entity, the Koreans hold a Korean-language service but are full members of the larger Sherbrooke congregation. They join with the English congregation once a month for morning worship and a fellowship meal, and there are joint services during the year, including also the Vietnamese congregation.

The Korean group underwent a period of discernment before becoming members of Sherbrooke, considering Anabaptist theology and its concepts of non-military participation and the priesthood of all believers.

Dan Clegg and Kara Shin, a Caucasian-Korean couple who have been attending Sherbrooke for about a year, were attracted to the church’s intercultural nature. “We were pleased to see how the two groups were working together in Anabaptist values,” says Clegg.

Shin says that at some previous churches the couple attended—that advertised themselves as diverse—integration seemed tokenistic and shallow, such as referring to a choir as being diverse with only one person of colour among the singers. But, at Sherbrooke, she says, “We found a church that wasn’t ‘doing’ integration. The identity was integrated.”

Clegg says: “[The Korean church] didn’t knock on the door to claim and have our own service; we came with an attitude to learn the Mennonites’ way. The whole point was, we were used to [a] top-down system and we learned that [the] Mennonite way is horizontal, where everyone participates. That was very refreshing.”

First Mennonite Church of Kitchener, Ont., with a membership of about 245, had a pre-COVID attendance of about 135 on a Sunday morning. Approximately 75 percent of the membership are of European background, with the other 25 percent being largely Hispanic, mostly from Central America and Colombia. There are also a few congregants from South Korea, Nigeria, Congo, India and Mauritius.

Openness to newcomers in the surrounding Waterloo Region “is probably built into First Mennonite Church’s DNA,” says lead pastor Rene Baergen. “We are, in some ways, from our beginnings, a refugee people.”

Involvement with newcomers to Canada goes back to the early 1980s, when First Mennonite offered space to a Hmong congregation for worship, then began relating to immigrants from Central America and later from Colombia. The church added the role of pastor of Hispanic ministry in the 1990s, and the congregation now sees it as key that the lead pastor can relate across cultural lines in Spanish. Baergen learned Spanish as a child in Costa Rica and Bolivia and has teaching experience in Peru, Uruguay and Cuba.

Additionally, First has worked hard to establish a sense of shared identity to ensure Hispanic voices are present on the leadership team and as church elders.

“We also seem to have moved beyond a ‘required representation’ to a more fulsome sharing of leadership, with folks born in Latin America a bit more present throughout the system in an increasingly diverse way,” says Baergen.

Sunday services at First are as intercultural as possible, always including elements in Spanish along with English, and sometimes in the languages of the other non-European congregants. Recognizing the need for times apart as well as times together, the Hispanic group also meets for its own service twice a month, and organizes fellowship in Spanish at backyard and beach gatherings and other events.

The intercultural road is one of humility, Baergen says. That road includes learning from mistakes, and trusting that relationships built and a shared desire to live out the unity of Christ will continue to bind the whole group together.

As Baergen says: “At our best we’ve attempted to foster a space where we can come together to create something which would not have been possible otherwise, a sort of third space, in which we all contribute something, in which we all accept a certain degree of discomfort in the interest of being transformed into the Body of Christ, no longer ‘Jew’ or ‘Greek’, or ‘Canadian’ or ‘Colombian,’ but one family of disciples.”

For the membership of First, striving to be one community is important.

“We trust that we find the necessary unity in our relationships with each other and our desire to follow Jesus together,” says Baergen. “And as a result, I think we’ve all discovered a much richer, more diverse vision of God.”

Holyrood Mennonite Church in Edmonton includes about 100 active congregants, about 40 percent of whom are immigrants from African countries. Holyrood sponsored four young men from Liberia in 2001, and when they, in turn, began sponsoring their family members, the African immigrant population grew. Today, members have also come from Sierra Leone, Ghana, Nigeria and Congo.

“Holyrood has been intentional in seeking to integrate the gifts our African brothers and sisters bring to our congregation,” says Pastor Werner De Jong. “When I first arrived as pastor in 2006, I asked one Liberian man, ‘Why have all of you stayed at Holyrood?’ He answered that they had visited other congregations in Edmonton and were welcomed wherever they went, but only Holyrood was quick to invite them to use their gifts. ‘We don’t just want to attend church,’ he said, ‘we want to be involved.’”

Worship services are fully integrated. Members of both cultures deliver Sunday sermons and serve as worship leaders, Scripture readers and ushers. An African worship team leads congregational singing every three to four weeks, singing African choruses and using African instruments, and the congregation added a New Year’s Eve service to its calendar at the request of the African members.

Church committees are also integrated; the current church council chair is from Liberia and the elders board chair is from Ghana.

Because people naturally feel at home with, and gravitate to, those of their own culture, De Jong acknowledges there are challenges in integrating more than one culture into a congregation. “It takes intentional effort, and much time spent in common activities, like worshipping or eating together, to build bridges of understanding,” he says.

Preference in musical styles is one example. “At Holyrood, some of our white members can find the African choruses repetitive and their instruments too loud,” De Jong says. “On the other hand, some of our African members can find the traditional Mennonite hymn singing too quiet and lacking in passion, as it is unaccompanied by clapping and dancing.”

Although Holyrood seeks to be inclusive with all voices heard, this can be difficult. Members must ask and listen carefully to what others say cross-culturally, as at congregational meetings. Whereas Mennonites of European background are comfortable with meetings at which people speak up and give their opinions, De Jong explains that most of the African members come from churches whose decisions were made by leaders, and members may not feel comfortable voicing their opinions in a large group.

As a congregation, Holyrood is still learning about building bridges of understanding between cultures. Members don’t see the challenges they face as negatives, but rather as opportunities to learn and grow together.

“To be serious about integrations requires humility and a teachable spirit,” says De Jong. “The importance of such inclusion is that we live into the promise of God’s peace and become a witness to the reconciliation that is ours in Christ.”

When defining the intercultural church, Fanosie Legesse, Mennonite Church Eastern Canada’s intercultural mission minister, suggests starting with a broader explanation in which the church admits it is “just scratching the surface.”

1. Have you ever found yourself immersed in a foreign culture? Aside from language, what were some of the differences from your own culture that challenged your comfort zone? What do you think are the biggest challenges for intercultural churches? Should this be a goal for all congregations?

2. In the sidebar, Fanosie Legesse describes the difference between multiculturalism, interculturalism and cross-culturalism. How would you explain the differences between them? Can you think of experiences or communities that depict each of these types of relationships?

3. In her viewpoint, Mollie Moua reflects on the challenges of having one foot in Hmong culture and one in mainstream Canadian society. What do you think will happen in the next generation? Is assimilation and loss of language inevitable for immigrants to Canada? How have traditionalist Mennonites managed to hold on to their own culture and language?

4. Werner De Jong, pastor of Holyrood Mennonite Church in Edmonton says, “It takes intentional effort, and much time spent in common activities, like worshipping or eating together, to build bridges of understanding.” What other common activities would help to strengthen these bridges of understanding? What are the blessings that come from intercultural relationships? 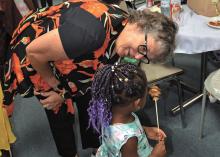 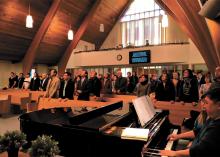 Members of all cultures at Sherbrooke Mennonite Church in Vancouver worship together in March 2020, at the last joint service before COVID-19 shut down public worship services. (Photo by Garry Janzen) 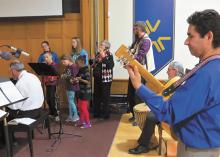 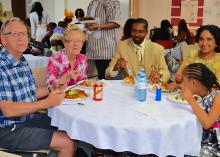 Enjoying a potluck at Holyrood Mennonite Church in Edmonton are, from left to right: Guenther and Ruth Toews, and Jeremiah, Leila and Rachel Chokpelleh. (Photo by Helena Ball) 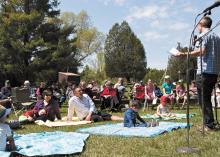 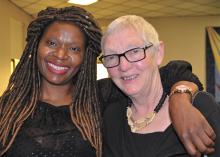 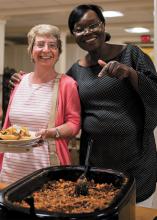 Donna Bender, left, and Omo Amayanvbo are pictured in a buffet line at First Mennonite Church in Kitchener, Ont. (Photo by Felipe Gonzalia)