Returning to a radical faith 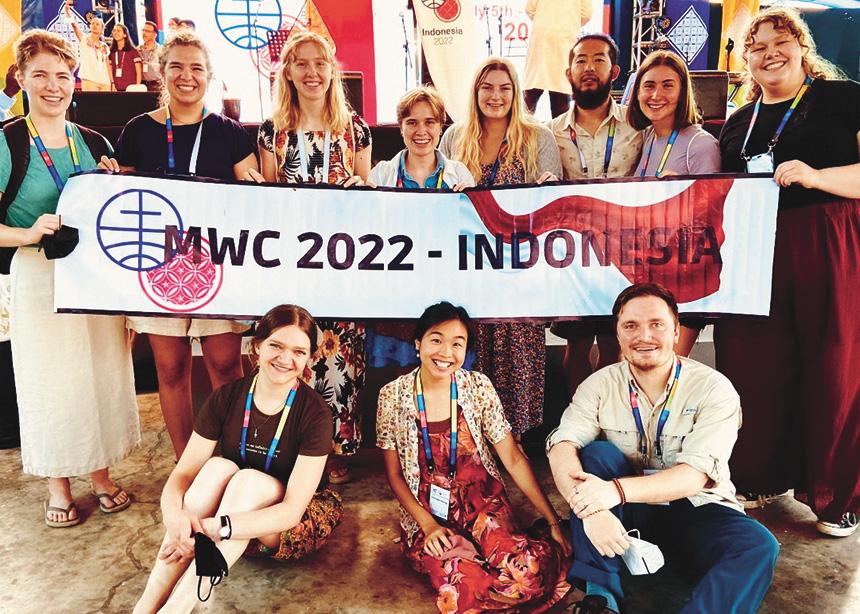 More than 30 delegates and more than 70 participants from MWC member churches in 26 countries gathered from July 1 to 4 to explore the theme, “Life in the Spirit: Learn, Serve, Worship.” Drawing from Ephesians, the theme allowed young people aged 18 to 30 to connect as one body of Anabaptists aiming to follow the example of Jesus Christ.

The majority of the Summit’s activities, including lodging, took place at the d’Emmerick Hotel—a conference centre surrounded by mountains—but evening worship was held at the nearby STT Seminary.

Located in an airplane hangar-like structure, the stage included lighting rigs, a smoke machine and a sound system that went to 11. Contemporary praise and worship music played with drums and electric guitars characterized the evening worship sessions, with appearances by local groups Kingdom Gospel Praise and Unlimited Fire.

Participants from North America led worship on July 2, singing an a capella rendition of “Praise God from Whom All Blessings Flow.”

On July 3, Asian participants gave the Summit a taste of worship from their home countries with a display that included dancing, worship flags and a heartfelt presentation of “How Great Is Our God” sung in multiple languages.

Morning worship sessions couldn’t match the volume in the evening but were no less energetic and meaningful. Young adults from Latin America led participants in a stirring rendition of “Here I Am to Worship” on July 2, a group representing Africa had participants dancing around the room on July 3, and a handful of Europeans led hymns and a candlelit prayer on July 4.

The closing worship service, held in the evening of July 4, featured JPCC Worship, a group with more than 235,000 monthly listeners on Spotify. It is the worship band at Jakarta Praise Community Church, which is part of one of the synods that belongs to MWC. More than a thousand people from the local community joined GYS participants for the service.

Andrés Pacheco- Lozano, a theologian from Colombia currently living in the Netherlands, invited participants to pay close attention to their spiritual lives as they seek to live in communion with God, with each other and with nature. “We need to let go of our egos and the ways we have created systems of violence and injustice that go against shalom—God’s peace,” he said. “We need to turn our attention to seek, listen and learn from the marginalized, and pay attention to how the Holy Spirit talks through them.”

The logic of mainstream culture is often one of supremacy, fear and violence, he added, while the church demonstrates a different embodied logic: one based on peace, justice and reconciliation. “We can live in hope, knowing that God ultimately will bring everything together. This hope is essential, for without it, without dreaming about what can possibly be, we can too easily be co-opted by what is, or what supposedly needs to be.”

The next day, Makadunyiswe Doublejoy Ngulube from Zimbabwe challenged participants to serve others with love, grace, humility, gentleness and patience, with an eye towards unity. “God has placed you in your spheres of influence . . . for a specific reason,” Ngulube said. “It’s for a divine purpose.”

That evening, Rizalee Pilare from the Philippines told participants that saved people serve people. “I encourage you, whatever you’re going through, may we not lose our compassion for the lost,” she said, ending her message with a question: “How are you serving where you are planted at the moment?”

On the final morning of the conference, Timo Doetsch from Germany challenged participants to walk with Christ, stand against evil and worship God. “At the end, Christianity isn’t a religion; it’s a relationship, and it comes by grace and faith in Christ,” Doetsch said, concluding later: “Dare to dive deep.”

Gea Denanda from Indonesia built on the theme of worship during the closing service. “Worship is about our posture, [the] attitude of [our] hearts,” Denanda said via a translator. “Sin cuts us off from God and one another and creation, but in Christ we are restored. . . . The Holy Spirit [wants] us to have a relationship with him.”

Each morning and afternoon, participants had the opportunity to listen, discuss and pray at a variety of workshops.

In a presentation entitled, “Let me tell you what you are not!,” Sarah Pillay used group discussions, movie clips and activities to help participants understand that it is not their failures, shortcomings, looks or achievements that ought to define them, but rather their identity as children of God.

“Your father is walking with you, his DNA is in you,” said Pillay, a teacher and broadcaster from Indonesia. “The God Almighty who rules heaven and earth is in you. Christ, the hope of glory, is in you and that is the mystery God wants us to know.”

In Daniel Talenta’s workshop, the pastor at GKMI Anugerah Jakarta shared how he uses his side-career as a stand-up comedian to act as a bridge for reconciliation in the church. Talenta spoke about a self-funded comedy tour of churches in Indonesia he embarked on that saw him connect with church leaders about the problems facing their young people. Then he  performed a stand-up set to those young people, touching on the problems he had learned about.

While participants were in workshops, the 34 delegates met to explore Ephesians and discuss the results of an assignment each had completed prior to arriving in Salatiga. Delegates were tasked with surveying young adults in their churches about how they understand the role of the Holy Spirit in their lives, and the issues and challenges they face.

On the final day of the Summit, representatives from Asia, Europe, Latin America, North America and Africa spent an hour reporting back to participants. Each talked about the challenges young people face in their regions, what they had learned during three days of discussion and they shared prayer requests.

Common themes that emerged included young adults not feeling recognized by the leadership in their congregations; a desire to learn and grow in their faith, but not having the space in which that can happen; feeling like they don’t belong in the church and finding that belonging elsewhere; and a desire for multigenerational unity and reconciliation in the church.

“There are some questions about the place of youth in the church,” said Lukas Sägesser, a delegate from Switzerland. “It’s difficult because, for a lot of churches, their events and activities have to compete with a lot of different events and activities in society. . . . Everyone does their own thing, and it’s not popular to commit to one community.”

Juan Manuel Guevara, a delegate from Colombia, said that there is a dearth of good Christian models for youth in Latin America—people willing to live the faith they profess. “We have a great challenge in our continent because [there is] a lack of hope,” he said. “It’s a great challenge for our church to bring hope to our youth [who] are without hope.”

The biggest challenge delegates from North America identified is that young people don’t feel like they belong in their churches. “They are feeling isolated and alone,” said Christen Kong, a delegate from Canada. “The second [challenge] is that churches are not reflecting what is written in Scripture about the church. They are surrendering to the ways of the world. They are struggling through contemporary issues.”

Reflecting on what delegates from Europe had learned, Sophia Mons from the Netherlands shared that she and her peers became aware during the Summit of their privilege and the wealth they have in their countries. “We have learned from many people that we should be grateful for what we have,” she said.

“This also leads us to a point that life in the Spirit is not material, it’s not based in the material world,” she added. “We live in a society that is based on the individual. We hope for our communities, for our youth and for our young people, to be able to combine our secular context with finding community and finding new ways of redefining church—walking together while worshipping and realizing we belong to a structure that’s greater than our own individual life.”

Deepson Masih from India said that GYS had helped Asian delegates understand how they can grow in their spiritual lives, and that they have fellow Christians around the world that they can rely on. “Even though we are from different countries [and speak] different languages . . . we can serve Christ together,” Masih said.

After the presentations, delegates and participants entered a time of prayer that involved a large world map covering more than half of the conference room floor. They stood and sat on the map, praying over different parts of the world.

During periods of free time and after evening worship, participants took part in a variety of activities, including swimming, archery, card games and singing around a bonfire. On one of the first evenings, an impromptu party erupted, leaving participants dancing and laughing late into the night.

Larissa Swartz, chair of the Young Anabaptists committee and the committee’s North American representative for the past seven years, expressed gratitude for the way everything at the Summit came together. “Six months ago, we were not even sure we were going to have it,” she said. “I’m so thankful . . . to have people here in person, to have delegates from [nearly] every continent.”

The goal of the Summit is to see participants transformed by the time they spend with each other and in the presence of God, she added. “The main thing they’re going back [home] with is relationships, and [we hope] that those relationships would continue to grow even after GYS. . . They now have friends in [other] areas, people they know they can reach out to and collaborate with or get perspective from.”

Reflecting on GYS during a presentation at the MWC assembly, Kong said that she sensed a longing for spiritual renewal among participants at the Summit. “We are going to places that others don’t,” she said. “We are saying things that aren’t being said and we are doing daring things for Jesus. Young adults are really mobilizing with the transforming landscape of church. We are . . . [returning] once again to a radical faith.”

Born out of a desire for young people in MWC member churches to be heard, the first GYS was held in Zimbabwe in 2003. The next GYS is scheduled to take place in Ethiopia in 2028. 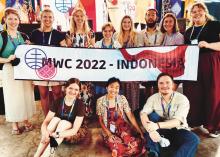 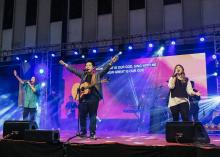 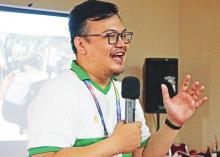 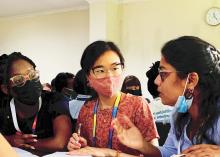 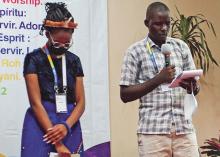 Sophia Mons from the Netherlands talks about what European delegates learned at GYS as Lukas Sägesser from Switzerland looks on. (MWC photo by Ratna Windhi Arsari) 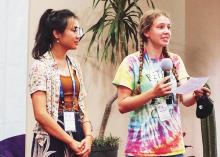 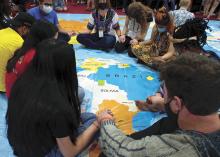