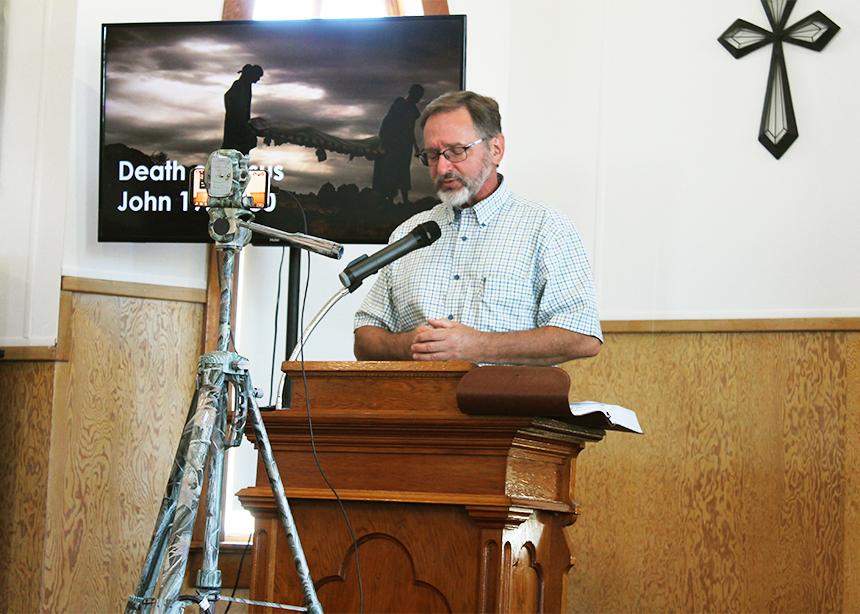 Ronald Kleinsasser prays during a Sunday morning worship service at Emmanuel Church, near Langham, Sask. Since resuming in-person worship, the church has been livestreaming services on its Facebook page. (Photo by Donna Schulz)

It is not unusual to hear of a small rural church closing its doors. It is, however, a rare thing to hear about a rural church reopening after being closed for more than 40 years.

And yet this is the story of Emmanuel Church, a tiny congregation whose building is situated about 15 kilometres southwest of Langham, Sask., and 24 kilometres northwest of Saskatoon.

A number of Hutterite families settled in the area around the turn of the century and began worshipping together in homes in 1901, with Andreas Stahl as their pastor. Unlike most Hutterites, these Prairieleut Hutterites did not live in colonies but rather farmed on individual homesteads.

Visiting evangelists from the Krimmer Mennonite Brethren (KMB) Church sponsored the construction of a new place of worship. Emmanuel Church dedicated its new building on Aug. 13, 1917, and became a KMB member congregation.

The KMB Church originated in Crimea, Russia (Krimmer being the German word for Crimea). Most of its 40 members immigrated to the United States in 1874, settling in Kansas. Over the next several decades, they established congregations in Oklahoma, California, and both North and South Dakota.

Never a large group, the KMB had a membership of 1,791 in 1954. When the KMB merged with the Mennonite Brethren conference in 1960, Emmanuel Church chose to remain an independent congregation in honour of its unique roots.

According to Pastor Ronald Kleinsasser, the congregation worshipped together until it closed in 1972, but, after that, it continued to maintain a church council and a women’s group. Over the years, those with ties to the church also held weddings and funerals in the building.

Then, in 2002, the women’s group began to host what they called “Sunday afternoons at Emmanuel,” which consisted of a worship service followed by a potluck meal.

In 2017, Emmanuel Church celebrated its centennial.

The church officially reopened in April 2019. Its average Sunday attendance prior to COVID-19 ranged between 15 and 20. Most congregants live in the surrounding area, and are farmers or business people, or have jobs in retail or nursing homes. Most also have a familial connection with the church, although some have never attended church before.

“[One couple] started attending because I did their father’s funeral,” says Kleinsasser. Another man became a Christian and was baptized while in hospital; he has been attending church services ever since.

Kleinsasser is aware that he is discipling new believers. He bought everyone in the church a new Bible as well as an audio Bible on compact disc, and he regularly encourages congregants to read or listen to their Bibles.

“You don’t come to God intellectually,” he says. “You come through the Word of God and through the Holy Spirit.”

Julie echoes her husband’s thoughts about the Holy Spirit’s leading. “God leads us to the unexpected,” she says. “We are still in the prayers of the mothers and fathers before us.”

“Hutterite is our cultural heritage,” says Kleinsasser. “Mennonite is our faith heritage.” He admits that there are some for whom the cultural heritage is more important and he works at teaching them the importance of making a personal commitment to Jesus Christ.

Since resuming in-person worship in June, Sunday morning attendance at Emmanuel is still below the stipulated 30-percent capacity. But Kleinsasser livestreams the services on the church’s Facebook page, where they have averaged about 200 views each week.

Kleinsasser is modest about the renewal his congregation has enjoyed, saying, “I guess I’m the right person at the right time.” 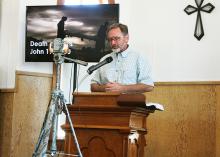 Ronald Kleinsasser prays during a Sunday morning worship service at Emmanuel Church, near Langham, Sask. Since resuming in-person worship, the church has been livestreaming services on its Facebook page. (Photo by Donna Schulz) 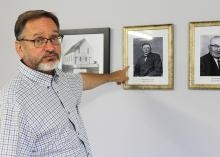 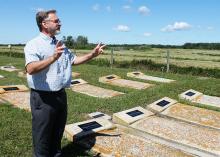 Pastor Ronald Kleinsasser stands in the cemetery of Emmanuel Church, a church with Hutterite as well as Mennonite roots. (Photo by Donna Schulz) 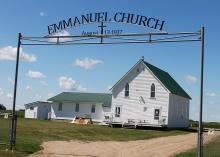 what a wonderful story of resilience and perserverance.

just wish it was an mc congregation.