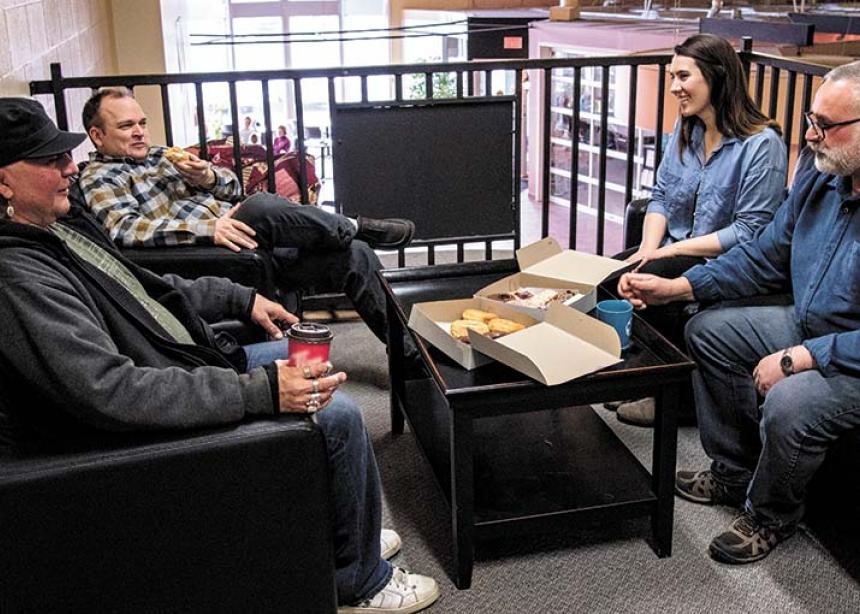 “There’s certainly a sense of urgency and immediacy to our request,” says Kerry Reimer, director of Parkland Restorative Justice, based out of Prince Albert, Sask.

One of Parkland’s main programs, Circles of Support and Accountability (CoSA), has been sustained largely through a federal funding initiative, but that funding is set to expire on March 31.

“We haven’t heard anything from the federal government at this point, so that means a no to renewal,” Reimer says. “All of us involved with CoSA, including the CoSA head office in Ottawa, are just trying to get this information in front of Members of Parliament, and really anyone who can help get our funding renewed.”

The group that eventually became Parkland Restorative Justice began in the 1970s as a ministry of Grace Mennonite Church in Prince Albert.

Orville Andres, a member of the church, served as chaplain at Saskatchewan Penitentiary and was looking for a way to create meaningful connections between inmates and people of faith. He and Dale Schiele, a fellow Grace Mennonite member, launched the Person to Person prison ministry that recruited volunteers to do visitation with inmates at the penitentiary, in hopes of building relationships and easing the isolation and loneliness that inmates experience.

Schiele was eventually hired to manage the program that grew and changed over the years. In 2014, the ministry was incorporated to become Parkland Restorative Justice, which provides restorative justice programming for the Saskatchewan Parkland region.

CoSA, a program in 15 centres across Canada engaged in reintegration of persons who have offended sexually, became a part of the ministry in 1997. The program has proven to lower the risk of re-offence by 88 percent.

“We know the program works and works well,” Reimer says. “It’s beneficial on so many levels. People often imagine restorative justice as only about reconciliation—a victim and an offender in a room talking about what happened and making things right. Or people think that the emphasis should only be on victims, not offenders. But making offenders safe [though CoSA] reduces victims, gives offenders healthy influences and healthy social connections that may be missing without CoSA volunteers.

“In our current system, offenders who are released are often more isolated than they were in the penitentiary system. The public perception about those who are released is ‘not in my backyard.’ CoSA believes that everyone is deserving of love, and volunteers are advocates for the core members [offenders] and their restoration.”

As to why the federal government hasn’t renewed CoSA’s funding, Reimer surmises: “I think the government is distracted right now. It’s a matter of getting the information in front of the right people. This program has been run at 25 centres for $1.5 million per year; that’s a cup of coffee in terms of the federal budget. Everyone who is involved with CoSA is really advocating and trying to make sure the right people see it.”

Without a renewal in funding, 25 percent of CoSA agencies will likely close, he says. “People can help advocate for CoSA by contacting their Member of Parliament, sharing the need with their churches and other networks, making a donation, or by getting involved with CoSA as a volunteer,” Reimer says.

The Person to Person program was critical to touching lives positively, recognizing humanity in its prowess & frailties.

Having served as a volunteer, and later as part-time chaplain at the penitentiary following Orville Andres, it was abundantly clear that much needed to change in individuals’ lives and our systems, for healing of personal and community relations, as well as the nation.

Grace Mennonite Church (GMC) got involved, in ways not imagined before, agreeing to baptize an inmate, who had asked to join (a GMC first, I believe). Our family was also privileged to billet him, occasionally, on and off, after his release - in Price Albert and later, in B.C., as he and his new wife, eventually, were making their own way through life’s challenges.

This work, though tiny in scope, perhaps, is critically catalytic, not only as outreach beyond the church. It ought to find its operational rootedness, life-blood nurture and integrity as a function within the church.

God knows how frail and imperfect we are, as humans. Mennonites have a long history of frail organized efforts, blemished “humble” communities, alongside graceless impatient undisciplined reactionary conduct, much like the “rest of the world,” if you will.

Given our history as a persecuted people, much maligned, hunted, and suffering due to failures of people within, and critics/agencies/governments without, it would seem as though “we” might be best equipped to be gentle, compassionate, and well equipped for sharing, guiding generosity of spirit toward healing and wholeness of persons, agencies, communities, etc.

So it follows, in my mind, that CoSA may well be the pivotal redemptive ingredient needed for our own internal healing, while sharing outwardly, what little sustenance might flourish within.

Peace be upon you.