Resourcing the church in transition

Siemens, who is Mennonite Church Saskatchewan’s executive minister, thinks the church’s future lies in mission at a local, congregational level. In recent years, he has become aware of two groups that, while not Mennonite, may have something of value to offer the Mennonite church in relation to this.

The first is the New Leaf Network, which, according to its website, is “a collaborative, relational and creative missional organization that supports, equips and connects church planters, spiritual entrepreneurs and missional practitioners in post-Christian Canada.”

“They’re trying to understand the Canadian voice,” says Siemens, because, “what works in the U.S. doesn’t work in Canada.”

Although New Leaf has its roots in the Free Methodist Church, Siemens describes it as having “a very ecumenical environment,” even though the organization’s goal isn’t necessarily ecumenism, “but drawing in people of various denominations who are grappling with the same questions.”

“They’re not Anabaptist,” says Siemens, “but I personally resonate with a lot of what they’re saying.” And what they are saying is that the local congregation is the centre of mission, formation and worship.

“This is where the community should touch the hem of Christ’s garment,” he says, “not in denominational structure or program, but at the local congregational level.”

Siemens says New Leaf is trying to answer a question like, “Why would someone who didn’t grow up in the church want to start attending?”

Josh Wallace, who is church engagement minister for MC Saskatchewan, has been spending time this fall in New Leaf’s virtual “re-design shop.” This space is intended to help established congregations re-imagine mission in their own contexts. Wallace will integrate what he has learned from New Leaf into his work with MC Saskatchewan congregations, says Siemens.

“Every forest needs old trees but also needs saplings,” he says, wondering, “How do more experienced churches become seed beds for new Anabaptist expressions?” He adds, “I think New Leaf can give us insights into what that can look like.”

Siemens is also hoping New Leaf might be able to help the regional church in finding church planters from within its own congregations and in teaching congregations about new expressions of faith.

The Jesus Collective, a fledgling organization launched by the Meeting House, a Be In Christ Canada congregation based in Oakville, Ont., is the second group that has come to Siemens’s attention as he considers church transition.

On its website, the Jesus Collective describes itself as “a relational network of churches, ministries and leaders who believe the time is right to unite, equip and amplify a movement that is all about Jesus.”

Siemens says the Jesus Collective hopes to be an Anabaptist network in North America, based on the idea of the church as a centred set, as opposed to a bounded set. He says the collective grew out of requests from independent churches that felt they “[couldn’t] buy into the full agenda of the evangelical right wing but also [found] some progressive elements they [couldn’t] agree with.”

Siemens has had some exploratory dialogue with the Jesus Collective, and the MC Saskatchewan council has given him permission to attend online meetings with the group. “They are wrestling with the same questions we are,” he says, “and I think we can be a resource to one another. . . . We have things to offer these neo-Anabaptists.”

“We are striving to be faithful in our walk, as are these groups,” he says. “We could be mutually transformed by these relationships.”

Siemens’s desire to see the Mennonite church partner with these groups carries with it a sense of urgency.

“Would we rather see good things die out, or [can we] plant some seeds?” he asks. “Renewal isn’t going to come from what we had in the past. It will come with putting Christ at the centre, [with] inviting our neighbours to participate in that, and [with] us participating in their lives.” 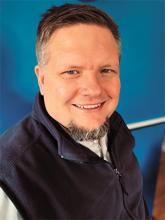