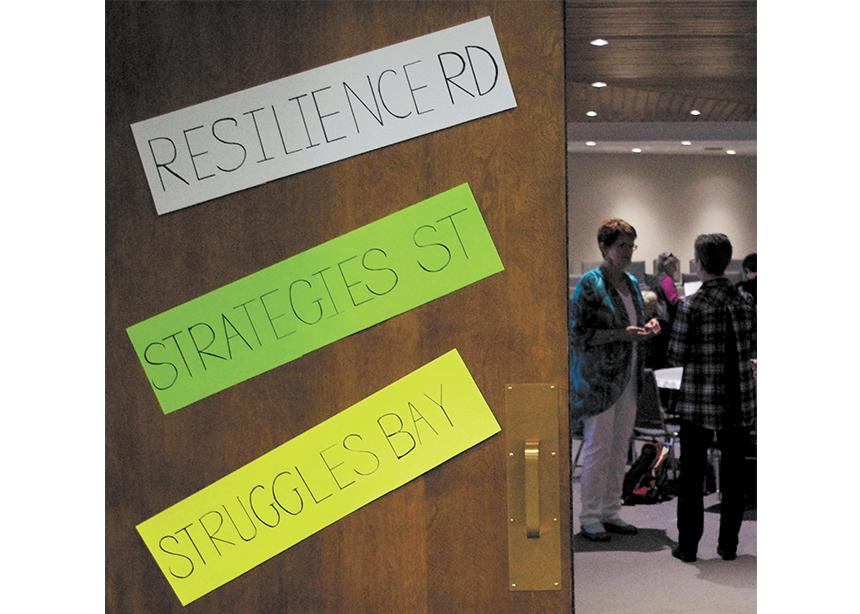 Signs outside the sanctuary of Charleswood Mennonite Church, where the Resilience Road retreat was held. (Photo by Nicolien Klassen-Wiebe)

Society is witnessing mental health struggles increase at an alarming rate, and the push for women’s voices to be heard grows stronger. At the same time, Mennonite Women Manitoba decided to travel the “road to resilience” this year for their annual retreat.

The committee chose the topic of resilience because, when they asked participants at the last retreat what topic they’d like to discuss next, mental health was a common theme, according to Elsie Rempel, a committee member, who said that women have very high expectations of themselves, which can leave them exhausted. “There are issues that drain our feeling of resilience, and we often just feel we should be better than we are,” she said. “And younger people, I hear there’s an epidemic of anxiety going on, because life is changing so quickly, and anything you prepare for, well will it last?”

Around 65 women attended the event, entitled Resilience Road: Struggle, Steps and Strategies, at Charleswood Mennonite Church in Winnipeg on April 28. Dr. Moira Somers was the speaker for the day. She is a clinical neuropsychologist and teaches in the University of Manitoba’s department of Clinical Health Psychology; she also attends Charleswood Mennonite.

Somers agreed that mental health struggles are becoming more and more prominent. “My belief is that we need to cultivate resilience and psychological hardiness, not because it will be a release from any of those things, but rather because . . . we can get to the other side of the struggle and experience wellness again,” she said.

She identified three ingredients for resilience: hardship, positivity and resources. Each ingredient had corresponding insight from Somers, followed by activities.

Laura Funk, another MW Manitoba committee member, made scripture come alive in a monologue, in which she portrayed a woman in the gospels who experiences a lot of suffering, haemorrhaging for 12 years before being healed by Jesus.

Laughter filled the sanctuary as women participated in a “human knot,” during which a group of people stand in a circle, grab other people’s hands at random, and try to untangle themselves without letting go. Afterward, they reflected on the struggles in their own lives that the knot represented.

Somers said that hardship can come from factors that are out of people’s control, mistakes they make, feeling like they are not good enough, losing their sense of self, or having a mid-life crisis.

She explained that resilient people don’t need struggles and negative feelings to pass in order to feel positive emotions. They keep looking for the good, because positive emotions broaden perspective, whereas negative emotions narrow the focus. She recommended conducting a negativity audit to get rid of unnecessary negativity by asking, “What parts of my day are consistently associated with stress or unhappiness?”

Participants each got a small, 50-paged notepad and were encouraged to fill as many pages as they could with things they were grateful for.

Throughout the day, women wrote services, things they needed and prayer requests on big sheets of paper on the wall, as a way for them to know each other’s needs and support each other. They also shared with each other their resources for dealing with struggles, such as friendship, being outside, exercising, meditation and music.

Somers said those tactics help remove people from their struggles, even if for a short while. She also recommended that women get out of their comfort zone and do things that excite them and make them learn something new.

Community is an important resource to strengthening resilience.

Rempel said there are opportunities for women to talk about mental health in the church, but not so many where urban and rural churches can meet together. She said that building community is especially important now: “We’re in a time where there’s a lot of change going on in the church, and when we . . . do this kind of connecting with each other, it isn’t just personally beneficial, it really builds the health of the church. . . . [It] is one of the gifts that women add to the body of Christ.”

Somers agreed that church community and faith allow Christians to tap into a bigger source of strength than just themselves, and gives them hope, which is part of the recipe for resilience. “I think our faith and our community sometimes gives us a way out of the darkness,” she concluded. 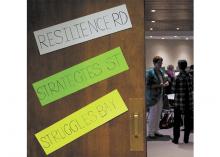 Signs outside the sanctuary of Charleswood Mennonite Church, where the Resilience Road retreat was held. (Photo by Nicolien Klassen-Wiebe)