Renewing life on the stage 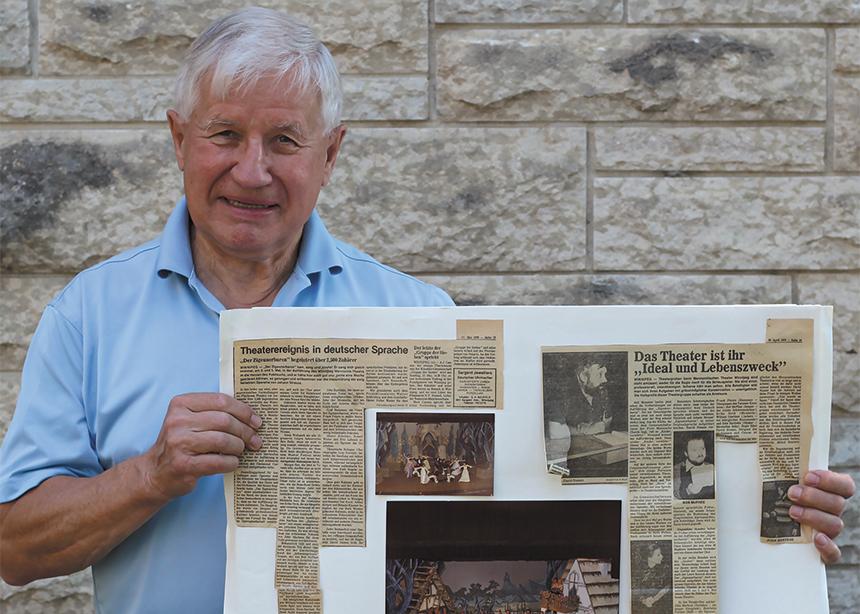 Henry Schroeder, chair of the Winnipeg Mennonite Theatre board, began acting with the troupe in 1974. ‘Our productions these days are much more modest efforts, but the creative energy and the love of theatre are still there,” he says. (Photo by Nicolien Klassen-Wiebe)

Mennonites are sometimes associated with their four-part harmony rather than their acting, but one group has been making a name for Mennonites in the theatre for decades. Winnipeg Mennonite Theatre, a not-for-profit amateur community theatre company, is celebrating its 50th anniversary in 2022.

Created from a love of theatre and value for community service, the company has produced plays every year since it began, including one-act plays, big theatrical works, musicals and dinner theatre—comedic, tragic, Mennonite and otherwise.

To celebrate its golden anniversary, in conjunction with the upcoming centenary of the Russian Mennonites’ arrival in Canada, the company is hosting a playwriting competition, inviting aspiring and experienced playwrights to submit original one-act plays on a Mennonite theme by June 2022. A panel of writers, actors and arts administrators will judge submissions and the winners will receive prize money and the potential to have their play performed by the theatre company.

Three men from First Mennonite Church in Winnipeg established this small Mennonite theatre company on the Prairies back in 1972. But its roots stretch back even further. The young people of First Mennonite (die Jugendverein) were already putting on shows in the 1930s and ’40s. In a step to make the operation more official, John Enns, Paul Neustaedter and Gerd Neuendorf pooled their money and launched the Winnipeg Mennonite Theatre.

Its casts have performed a long list of works throughout the following years: The Magic Flute, Life of Galileo, The Glass Menagerie, The Trial of Jesus, Hamlet and more—all in German—as well as plays in English.

Produced by a cast and crew of volunteers, these were not simple productions. Dozens of participants in finely detailed costumes acted on a stage decorated with a multitude of elaborate sets, accompanied by a pit orchestra. Audiences of more than 2,500 people would fill the seats of the Pantages Playhouse Theatre in Winnipeg, over the span of two or three nights.

“There were years when our shows were just as good as anything out there,” says Enns, a member of First Mennonite Church in Winnipeg.

It all worked because of visionary leadership—David Riesen, an English teacher and member of First Mennonite, directed the company for several years—and the passion and energy of everyone involved.

“You can just see how something like that would energize a Mennonite community,” says board chair Henry Schroeder.

Everything came together perfectly, like lightning in a bottle—but moments like those don’t last forever, Enns says. “It’s not like it used to be. Fifty years is a long time and a lot of things change in that time.”

The company’s core audience grew older, family sizes shrank, commitment to church and related activities decreased. Financial and human resources waned and the energy that came with the fervour of the past decades faded. Enns says it can be disheartening to compare those bustling years to a currently emptier calendar. But the troupe presses on, “one foot ahead of the other,” still meeting once a month to “keep each other excited and energized.”

Although German productions have fallen to the wayside, English plays continue, often supporting the work of local playwrights. The company has participated in almost all of the 20-plus years that the Royal Manitoba Theatre Centre has held its Master Playwright Festival.

“Our productions these days are much more modest efforts, but the creative energy and the love of theatre are still there. We still have our moments of magic,” says Schroeder, who also attends First Mennonite and joined the company in 1974.

There are a few young adults on the company’s board and roster of actors, but Schroeder is eager for more of the next generation to join this theatre community and learn across generations. He is quick to assert that actors or crew members don’t have to be Mennonite to join either—numerous members aren’t—although he and Enns try not to let that original “Mennonite flavour” completely slip away.

Enns doesn’t know what the next ten years will look like. “What keeps me up at night is: “what’s going to happen in the future?’ ” she says.

Despite the obstacles, the company is adapting. One radio play is slated to air this fall on the theatre’s website. Rehearsals with over a dozen actors are already underway for one: The Death of Pollyanna by Veralyn Warkentin, a drama about medically assisted dying. The troupe is also hoping to do a full comedy production with an in-person audience next spring, if COVID-19 restrictions allow.

“I want [Winnipeg Mennonite Theatre] to evolve to something special. The 50th anniversary celebration . . . I’m hoping that it can be part of a renewal and a refocus,” Schroeder says. 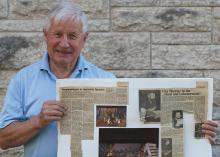 Henry Schroeder, chair of the Winnipeg Mennonite Theatre board, began acting with the troupe in 1974. ‘Our productions these days are much more modest efforts, but the creative energy and the love of theatre are still there,” he says. (Photo by Nicolien Klassen-Wiebe)

The Winnipeg Mennonite Theatre cast on the set of Der Zigeunerbaron (The Gypsy Baron) presented in 1979 at the Pantages Playhouse Theatre, which, at that time, seated more than 1,600 people. On opening night, the box office had to put up the SRO (sold right out) sign. (Photo by Nicolien Klassen-Wiebe) 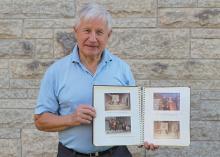 ‘Our productions these days are much more modest efforts, but the creative energy and the love of theatre are still there,” says Henry Schroeder, chair of the Winnipeg Mennonite Theatre board. (Photo by Nicolien Klassen-Wiebe) 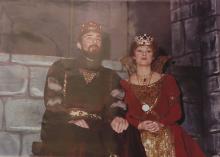 Catherine Enns, right, acts in Winnipeg Mennonite Theatre’s production of Hamlet, presented in 1984 at the Pantages Playhouse Theatre. It was a full-length production, performed all in German. (Photo by Nicolien Klassen-Wiebe)