‘A relationship between colleagues’ 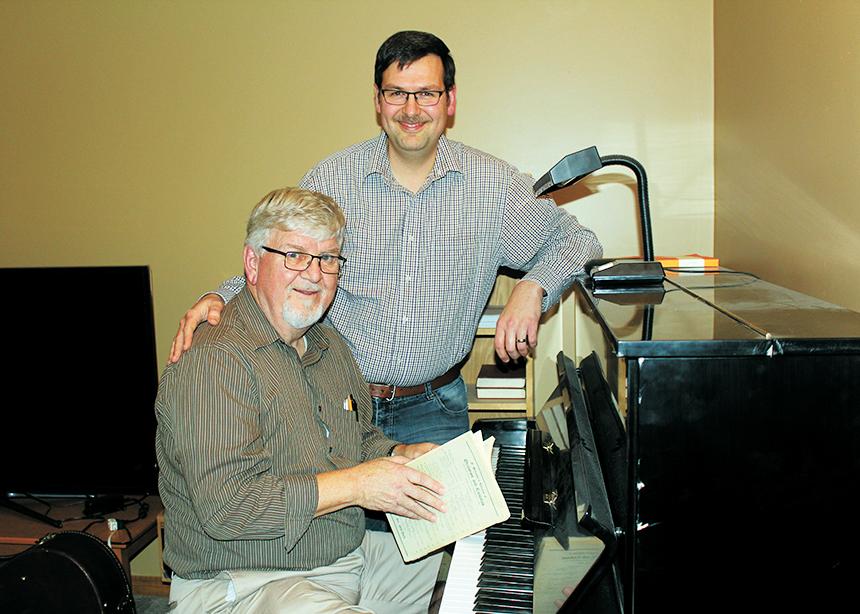 Choir conductors Ben Pauls and his son Matthew enjoy using their talent, energy and enthusiasm to bring people together through choral music.

Choir conductors Ben Pauls and his son Matthew share enthusiasm, talent and a passion for choral music. This fall, they had the unexpected opportunity to share the stage at a fundraising concert for the Canadian Foodgrains Bank.

The concert—the first they shared together as conductors—featured a joint performance of the Faith and Life Male Choir conducted by Ben and the Canadian Mennonite University (CMU) Men’s Chorus conducted by Matthew. Collaborating with his father, Matthew arranged one of the songs they sang.

“I have come to realize what used to be a relationship of father as a conductor and son as a soloist has become a relationship between colleagues,” says Ben. “I value Matthew’s thoughts and inputs.”

Ben never envisioned a musical career when he was attending a one-room country school near Morden, Man. He took piano lessons and enjoyed singing, but studying music was unplanned. After high school, he enrolled in the music program in what is now CMU. “The other programs had too much reading and too much writing, so I took music,” he says.

As part of a conducting course at CMU, Ben had the opportunity to direct a 100-voice student and community oratorio choir during one of its rehearsals. “I still remember the feeling—when I lifted my arms, they all sang. They sang just because I was leading. It was hugely rewarding and satisfying. That experience was very encouraging and affirming.”

His studies led to a career of teaching music, and pastoral ministry. In 1986, he earned a master’s degree with a choral conducting major from the Westminster Choir College of Rider University, one of the world’s leading centres for choral study and performance, located in New Jersey.

Matthew, meanwhile, grew up in a home filled with music. His early childhood was spent in Asunción, Paraguay, where Ben taught music at the Evangelical Mennonite Theological Centre for almost 10 years.

“Music was Dad’s world—music was everywhere,” recalls Matthew. “Dad quizzed us on just about any classical music just about anywhere—in the car, at home, when we stopped by his office at school. He would ask us what kinds of instruments we heard and if we could guess who wrote it. Sometimes he also asked us what kind of a piece it was. For example, if it was a symphony or a piano concerto.”

One of Matthew’s early childhood memories is the first time he heard Franz Schubert’s “Erlkönig.” “I remember being mesmerized by the drama in the music,” he says. “We had stopped by my dad’s office for a bit, and he was listening to it. He started it from the beginning so I could experience the full effect of the song.”

During his first year at CMU, Matthew took courses to prepare for church youth ministry, but by his second year he decided to pursue a career in music. “I realized that I certainly had an affinity for music,” he says. “My musical ear had been developed through everyday life.”

Matthew joined the CMU faculty as assistant professor of music in 2015, and recently completed his doctor of musical arts degree in vocal performance. Among his many musical accomplishments are his performances as a featured soloist with numerous symphony orchestras and chamber choirs.

The musical careers for father and son intersected at the Foodgrains Bank fall fundraising concert, which began with separate performances by the choirs they were conducting, and culminated with a joint performance of five songs. Each choir consisted of about 35 people.

As conductors, they help choir members understand, appreciate and convey the deeper meanings of the lyrics and music. The Faith and Life Male Choir sang “The Lord’s Prayer.” Ben says the words, “Give us this day our daily bread,” serve as a reminder that food is a basic essential that cannot be taken for granted.

The joint performance included a song based on the writings of Menno Simons: “True evangelical faith cannot lie sleeping, for it clothes the naked, it comforts the sorrowful, and it gives to the hungry food, and it shelters the destitute.”

“Certainly each choir fed off the energy of the other, but it was also a bringing together of older voices and younger, combining the academic university voices with the larger church community,” says Ben. “Together, we focussed on one of the mandates that Jesus gives us: If someone is hungry, give him something to eat.” 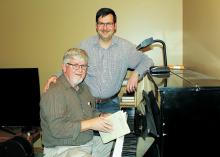 Choir conductors Ben Pauls and his son Matthew enjoy using their talent, energy and enthusiasm to bring people together through choral music.