The refugee highway in Kitchener-Waterloo 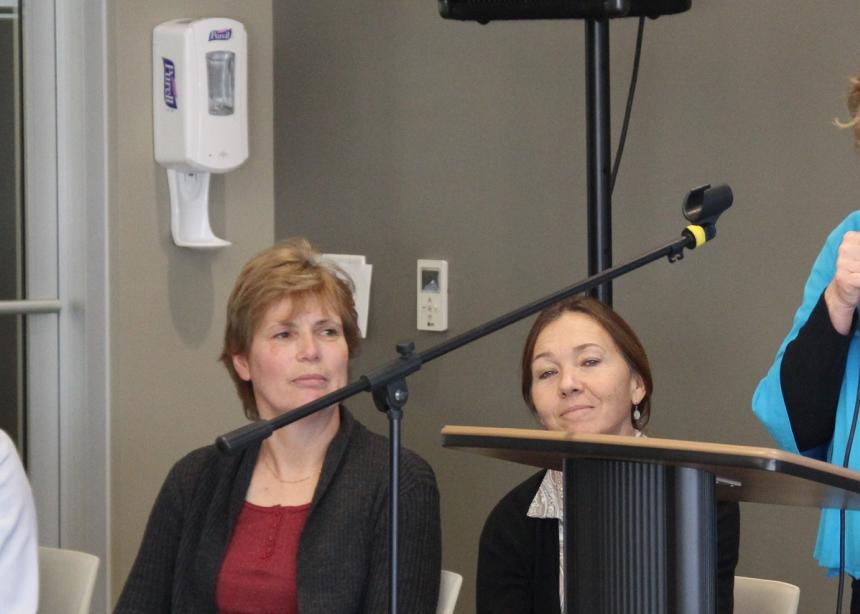 “Why are there three Mennonite organizations working on refugee support in the Kitchener- Waterloo area?” was the question being answered at a Nov. 29, 2016, meeting at 50 Kent Ave. in Kitchener. Mennonite Central Committee (MCC), Reception House and Mennonite Coalition for Refugee Support, which all work at the refugee question from different angles, provided some answers to those in attendance.

Providing humanitarian aid to refugees in many overseas locations is one of MCC’s ways to support refugees. MCC is also a sponsorship agreement holder, meaning that it can facilitate private refugee sponsorships in Canada. This work began with the Southeast Asian “boat people” crisis of 1979, when Canada accepted 77,000 refugees over three years from Vietnam and other countries.

In the past year MCC Ontario has worked with 249 groups to sponsor 757 refugees.

MCC helps groups to plan for the coming refugees and then supports the groups as they support refugees for a year.

Reception House was begun in 1985 by the Kitchener-Waterloo House Church Assembly to supply short-term housing to government-assisted refugees. In 2008, it moved to a community board structure and is one of 36 such organizations in Canada. Over the first 30 years of its existence, Reception House has housed 250 to 300 refugees a year, but in the past year (October to September), it had housed 700 and expected another 200 by the end of 2016.

A house on David Street in Kitchener proved too small and so the Holiday Inn in Cambridge, Ont., is now used to support the main location. Generally, Reception House provides two to three weeks of temporary housing for refugees.

The Mennonite Coalition for Refugee Support was founded in 1982 by First Mennonite Church in Kitchener and the now-closed Olive Branch Mennonite Church. It works with people who claim refugee status either when entering Canada, or after they are in Canada on a short-term visa and decide that it is unsafe for them to return to their country of origin. Up to 10 percent of the refugee claimants the coalition works with are from the LGBTQ community and could face harassment or worse in their home countries.

Refugees have 15 days to file for status after they have been accepted into Canada temporarily, and then between 30 and 45 days to gather all the evidence they need to support their claim. The coalition helps them find housing and other supports they need, often turning to Welcome Home Refugee House or Open Homes, which places claimants in homes with volunteers for between three and 12 months.

Each of these three organizations work to get individuals and families into English-language training, their children into school, and access to health and dental care.

One of the questions from the floor was about what happens after the refugees have spent a year in Canada and their sponsors and government step back from immediate support. The response was that the organizations work to make a smooth transition, especially in those cases where refugees who have become permanent residents need to go onto social assistance because they have not been able to find work. Shelley Campagnola, director of the Mennonite Coalition for Refugee Support, said that the three groups want to present a united front because they feel like “we are in this together.”

A wee correction: Welcome Home Refugee House is a nonprofit home where newly arrived refugees, primarily harder to house singles, can live in affordable, shared accommodation with skilled staff who assist with settlement and build bridges to community volunteers. The description you've included in the excellent article actually refers to Open Homes. Check us out at www.welcomehomekw.ca. We've been partnering with all three agencies since 2004. And interestingly, I'm Mennonite!

Thank you for calling our attention to this, Sharon. It has now been corrected.
—Web editor