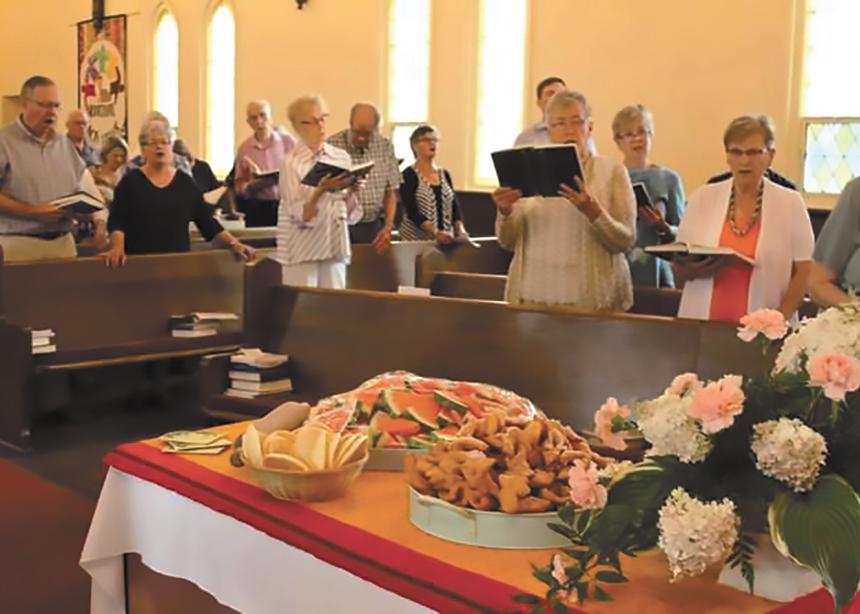 The Waterloo-Kitchener United Church congregation rearranged its sanctuary in a more communal way around a central space. The church’s summer theme was ‘Building community around a shared table,’ with food to share at the end of the service. (Photo by Karl Dick)

In what church member Karl Dick calls a “bold summer experiment,” the congregation at Waterloo-Kitchener United Mennonite Church decided to unscrew some of its hardwood benches and re-arrange them in “a more communal” way.

While it took less than an hour to angle some pews toward each other, facing a central space, Pastor Ben Cassels says many people were “caught off guard” by how the change has impacted this nearly 100-year-old congregation that worships in a 19th century Presbyterian sanctuary.

For several years, the congregation has been in an intentional process of discernment about its identity. Rearranging the pews was a tangible symbol of a much deeper process.

Like many churches, Waterloo-Kitchener faced declining attendance and an aging demographic. Leaders and congregants explored several options, including mergers with other congregations, but they decided they still liked being together. That meant facing up to their reality. Instead of assuming something was wrong and needed fixing, the church began to “embrace what it means to be a small church,” says Cassels, adding that being honest about the life stage of the church has been “an incredible gift.”

It can be easy to lose hope, and people need time to mourn what is past. But it is also an opportunity to explore what it means to be the church. Our “vision for now” is to be “intentionally small,” he says.

For the month of August, the congregation worshipped in the rearranged space, focussing on building community around a shared table. In the centre of the worship space, a table was filled with food to share: cinnamon buns one week, rollkuchen and watermelon another week. One person described it as “liturgical brunch.”

The pew changes mean people sit closer together and can look each other in the eye. Their singing improved because they could hear each other better. Children’s time happened in the centre of the worship space, surrounded by everyone else. Sharing communion around the fellowship table was particularly meaningful. People were moved to tears by the experiences of intimacy and community.

Some people were uncomfortable with the change at first, but many came to see the “life-giving aspect” of it, says Cassels. According to him, there is a “renewed sense of enthusiasm and energy.” Leaders have a new sense of hope and permission to dream and be creative. “The imagination gets going,” he says.

For now, the church will keep meeting this way. It will take time this fall to evaluate the shift and continue discerning what “growing smaller together” means.

This article appears in the Sept. 30, 2019 print issue, with the headline "'Growing smaller together.'" 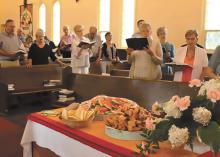 The Waterloo-Kitchener United Church congregation rearranged its sanctuary in a more communal way around a central space. The church’s summer theme was ‘Building community around a shared table,’ with food to share at the end of the service. (Photo by Karl Dick)