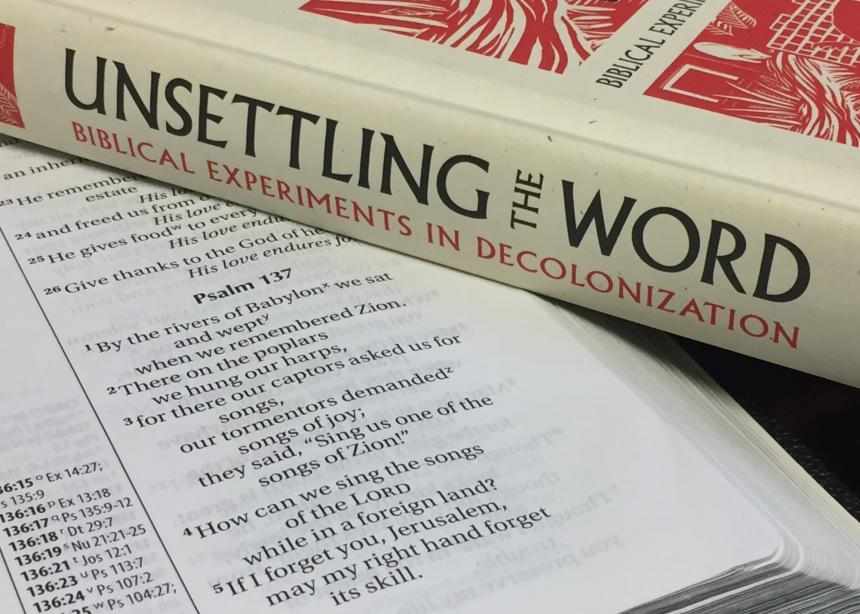 In a large city like Toronto, attending a church small group or Bible study may not be feasible for those with families or busy schedules. But Toronto United Mennonite Church has found a technological solution.

Congregants recently completed a six-week book study based around Unsettling the Word: Biblical Experiments in Decolonization and conducted remotely by video conference.

“I think it was Tim’s idea to do it at 9 p.m. on the basis that parents could take part after they put their kids in bed,” says study leader Peter Haresnape, in reference to Tim Schmucker, chair of the church’s Mission and Service Committee. “And that really works for me. . . . I kind of like that idea, that even if I’m at an event I can get home, have a cup of tea and [lead the study].”

Haresnape, a contributor to Unsettling the Word, created a study guide for the book as part of his work as general secretary of the ecumenical Student Christian Movement.

“This is a great book. People put a lot of work into it. I don’t want to see it just put on the shelf or people read it once. . . . I wanted to create a resource that people would use to study it together in groups,” he says.

The online video conferencing format has required some creativity in adapting the study guide, he says. During the first session, they did a screen share of the text of the book, but when it was suggested that most people had a copy of the book, they switched to using their cameras. “I feel like I’m actually really connecting with these people, instead of just speaking into the void,” he says.

“I have used video conferencing for meetings at work, and somehow this seemed to flow even more smoothly.. . . I think it was helpful that a number of people in the group have known each other for years,” she says.

It also made things much more convenient. “I had trouble dedicating an hour or hour-and-a-quarter, and there is no way I could have added the better part of two hours to that commitment to travel to the church and back, or to someone’s place across the city,” she says.

The content of the study also worked well for her busy schedule, she says, since the book’s “short, accessible chapters” meant there was no requirement that participants do any reading in advance. “Peter led with the idea that everyone had something to contribute, no matter how familiar they were with the subject matter.”

In some ways, not being in the same room may have enhanced the group dynamic, Neufeldt says. “There was a little chat at the beginning as people arrived, but nowhere near the distraction of getting a group together, settled and quieted when you get together in person.”

Those who needed to step away for a moment could just turn off their microphone and video without distracting others.

The “chat” function in Zoom, the video conferencing software that was used, also proved helpful to enhance the side conversation and share additional information, she says.

“Peter introduced the idea of saying or writing ‘ouch’ if any comments were personally offensive to us, as a way of letting people know that a comment hurt even if it was not intended that way,” she says. “No one used this tool, but I think talking about it was helpful awareness raising, and the option to write it, I think, would be helpful for people who have a hard time breaking into conversation.”

Each session began with a territorial acknowledgement and a prayer, Haresnape says. The group then read through a chapter of the book and corresponding Bible passage before discussing the material.

“One piece that has been really exciting, probably the most exciting of these sessions, has been when people have brought their own experience, their relationship to Christianity, into the conversation, particularly as people have spoken from their different settler perspectives. People who are settlers on the land, who are not European in origin, or who are recent immigrants,” he says. “I’ve had a few experiences just honestly hearing people share their stories in a way that they wouldn’t have done it if we hadn’t decided to do this particular study.

“And we couldn’t have created a study to share those stories if these Indigenous [writers] in this book . . . hadn’t provided this,” he adds.

The hour-long sessions had between four and 12 participants.

Neufeldt says that she would certainly consider participating in another study by video conference. “I think Peter is a really good study leader, and that helps regardless of the medium . . . I think group study is significant for the growth and health of a congregation, and this seems like a viable media for our era.”

The initial idea was for the study to run for six weeks, which has now been completed. They may continue in the future, Haresnape says, adding, “I would love to do it. I think it was a great experience doing it, and reading with that level of care,” he says.

Unsettling the Word is available on commonword.ca, along with Haresnape’s study guide, which can be downloaded for free.

Further reading about Unsettling the Word:
Decolonization through unsettling Scripture 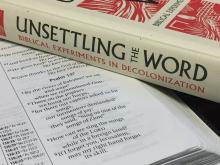