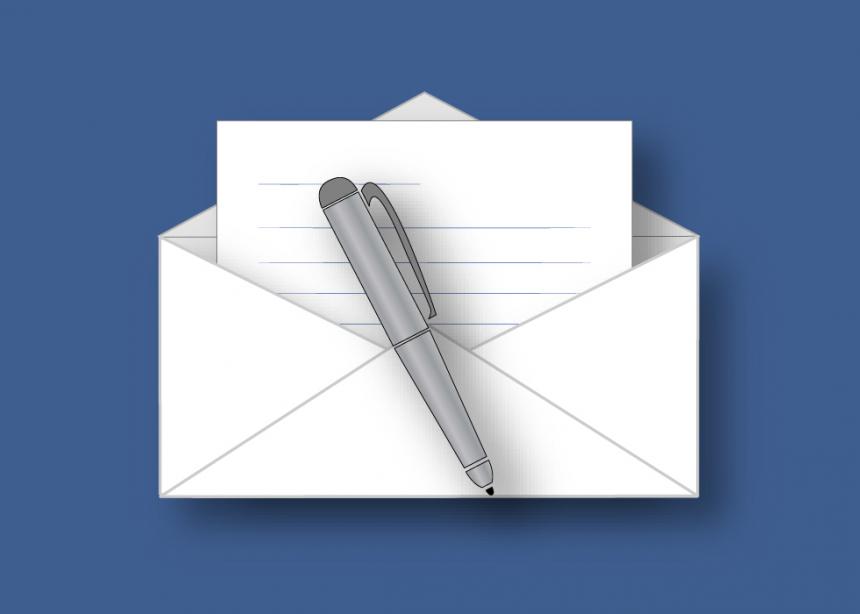 Re: “Unity of the Spirit,” Feb. 26, page 4.
I found the adapted presentation of Thomas R. Yoder Neufeld disappointing and unhelpful. I cannot detect any engagement by him with parts of
I Corinthians. This omission severely, if not completely, undermines this piece of writing.

Paul writes unequivocally in I Corinthians 5:11 that a Christian must not associate with anyone who calls himself a brother and is engaged in specific acts, which he lists. Paul is even harsher when he writes in I Corinthians 5:5 that someone in the Corinthian fellowship is to be expelled and “handed over to Satan.”

If someone can reconcile this piece and Paul’s writings in I Corinthians, please let me know. I am listening.
—Helmut Buhr, Vancouver

All loving, committed relationships are natural

Re: “Unity of the Spirit,” Feb, 26, page 4.
May I suggest that the gender identity and sexuality debate be simplified and considered from a scientific point of view. As albinism is the product of genetic make-up in all vertebrates, similarly sexual orientation is also the product of genetic combinations. This knowledge was not known in biblical times; therefore, any statements of censure made should be applicable to all because we are all human.

I suggest that we bless any couple committed to a faithful, loving, caring, monogamous, lifelong relationship. Why would we want to oppose a committed, loving, same-sex relationship? Scientifically thinking, it is all natural.
—Peter Peters, Winnipeg

More opinions on the future of Israel and the Middle East

Re: “Two writers weigh in on the future of Israel and the Middle East” letter, Jan. 29, page 8.
I share Richard Penner’s desire to resolve the Palestinian/Israeli conflict but not his assessment of the current state of affairs nor the steps to resolve the conflict.

Unfortunately, he mirrors a view that is not uncommon in North America: We understand the problem and have the solutions; just listen to us.

He trivializes Israel’s blatant flouting of the Geneva Convention and numerous UN resolutions that criticize Israel’s behaviour. “No one would argue that the Jewish people have done an outstanding job of administering their country,” he writes. Does this reflect the horrendous pain the Israeli government inflicts on the Palestinian people on a daily basis?

The comments of “primitive ‘tribal’ state” and “obligatory sabre rattling” of the Arab countries show a total lack of respect for the countries involved in the conflict. Negotiating with such an attitude is doomed to fail.

What we as a faith community must do is:

I’m confused by Richard Penner’s letter. More discussion and clarification is needed. We, as Mennonites, need to understand the issues that face both Christian and Muslim Palestinians as they seek peace and justice.

I had the opportunity to hear Daoud Nasser speak in Phoenix, Ariz. He is a Christian Palestinian who owns land just outside Bethlehem. Because he is not allowed to have water nor electricity, and cannot build on his land due to Israeli law, he struggles to farm his land. Trees he has planted have been bulldozed down by the Jewish state.

In response, he has set up an organization called Tent of Nations (tentofnations.org), which is committed to the following:

Since 1991, the Nassar family has been fighting the State of Israel to keep their land, land that the State wants to confiscate to build more settlements on. Sadly, many Palestinian families are in the same situation.

I urge all of us to stand up for peace and justice in the Holy Land.
—Alvin Thiessen, Winnipeg

Re: “How long will it take?” letter in support of LGBTQ inclusion, Feb. 12, page 9.
My father Abram Martens was one of those “preachy” ministers. He was elected to the ministry in Ukraine at the age of 25, when accepting ordination immediately put him on the “black list.”

Dad served faithfully, unsalaried all his life, and passed away in 1979. He served faithfully because he loved the Lord and believed the Bible to be God’s truth that is not negotiable. A German hymn we used to sing asked the question, “If the Bible is no longer valid, what shall faith rest upon?”

I notice that in some churches the hymnal is already obsolete. Is the Bible next?

The ministers of Dad’s generation are the ones who suffered during the Russian Revolution, the Depression and all the hardships of a new life in Canada. They are the ones who built our first churches, Bible schools and colleges. We owe them all a big debt of gratitude.
—Cornie Martens, Rabbit Lake, Sask.

From the number of letters responding to my letter in the January 29, 2018 issue, I feel obligated to clarify some of my comments.

I am equally insulted at how official Israel treats its Arab citizens. That's one reason I say Trump did not go far enough when announcing support for Jerusalem's capital status. He should have made the point that Israel needs to go much further in treating all its citizens democratically, as they continually brag about being the only functioning democracy in the Middle East (that's how they get $3 billion a year from the Americans).

The main point of my letter is that the Israelis should be pressured to take the name "Jewish" out of the name of their country. Why can't they call their country "the State of Israel" like any other country (except Iran). Insisting it is the "Jewish State of Israel" takes away all semblance of it being a democracy that treats all its citizens equally.

There are two things Arab countries hate most about Israel. . . .

1. That it was established in the aftermath of WWII by Jewish people that originated from outside the Middle East (mostly Europe and America). They did this with the support of the Western powers. They did this by confiscating much of the locally owned land owned mostly by Arabs, but also some Christians and Jews.

2. They insisted to call their new country the "Jewish State of Israel," implying a certain kind of ethnic exclusivity. This "implication" turned out to be true, even to this day--witness the bulldozers that move in when a new "settlement zone" is set up.

I think we can all agree that there has been little progress in establishing mutual trust and respect between Israel and its Arab neighbours. To me (from a distance), it seems there is not enough acknowledgement of the historical context within which this current situation evolved.

The first big oil strike in the Middle East was by a British oil company (BP) in Persia (Iran) at the upper end of the Persian Gulf near Kuwait. It was 1908 and brought huge attention to the region from the industrialized world. The Ottoman (Turkey) empire was falling apart; WWII was brewing, the result of which gave considerable strength in global affairs to the Western powers. New political boundaries where established in the Middle East; influence was divided up between primarily Britain, United States and France--and generally reflected their interest in oil. The political boundaries we have today have little to do with the ethnic lines that distinguish the territory. The three western powers generally left local politics alone (as did the Ottomans). This meant "tribalism" continued to flourish. According to Webster, "tribalism" means "strong in-group loyalty." This very local allegiance continues to flourish in spite of of the modern "glitz" that the new oil wealth brought to the region. That's why we have all those squabbles continuing unabated like what's happening now in Iraq, Syria, Yemen, Afghanistan, etc. It is somewhat contained in Saudi Arabia, Iran and Egypt due to an overwhelming internal security apparatus and an authoritarian system of government.

It's also this tribalism that makes it possible for people like Ben Laden, Khomeini, etc to flourish. All they have to do is whip up some emotion about those "foreign infidels" coming here to run our lives.

I think there is reason to be optimistic about the future (it won't happen in this generation). Middle East leaders are starting to see the value of secular education, and the West is no longer exclusively dependent on the Middle East for most of its oil.
- -Richard Penner