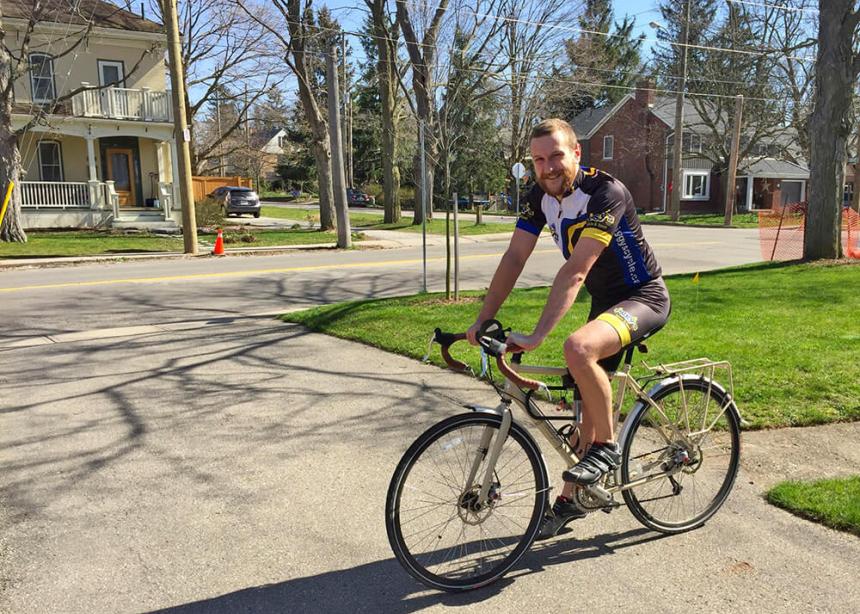 A young man from southern Ontario is cycling across Canada this summer to raise awareness of mental health issues, while also raising funds for the Defeat Depression campaign.

Martin Bauman of Waterloo, Ont., embarks on the 7,500-kilometre trip on June 7, 2016. The ride will start in Vancouver and end in St. John’s, N.L., at the end of August. Riding under the banner, “Keep pushing: Martin’s ride for mental health,” Bauman hopes to raise $10,000, the majority of which will be allocated to the Waterloo-Wellington-Dufferin branch of the Canadian Mental Health Association.

The 23-year-old, who attends Hawkesville Mennonite Church and works as a reporter for a local radio station, was inspired to do the trip last October after interviewing a family friend who was spending a cold Saturday cycling 50 kilometres for Ride for Refuge, an event that raises funds for the displaced, vulnerable and exploited.

When Bauman asked his friend why he was participating, he was struck by the response. “You look at the news today and you see so many people struggling . . . and sometimes it feels like there’s really nothing you can do, but this is really, in one small way, something that I can do to help,” he told Bauman.

By that evening, Bauman was plotting his ride across Canada in spite of the fact that he had never cycled more than 20 kilometres in one go.

Bauman chose the cause because of the various ways people in his own life have struggled with mental health. When he was 10 years old, his cousin committed suicide. Three years later, Bauman’s father went to the hospital seeking treatment for a bout of depression. When Bauman was in high school, one of his friends revealed that he had been self-harming. And Bauman himself has struggled with seasonal affective disorder and anxiety.

“All those pieces together made mental health something that was important to me,” he says.

Bauman has been training since October, working his way up from 20-kilometre rides to be able to comfortably ride 100 kilometres at a time. He will follow a route he found on CanadaByBicycle.com that will necessitate riding between 100 and 120 kilometres each day, with occasional off days thrown in for rest and sightseeing.

In addition to raising awareness and funds for mental health, the ride is an opportunity for Bauman to see Canada from coast to coast.

“My sense of wanderlust was stoked last year when I went to Europe and did two months of backpacking,” he says. He would often tell people he met along the way about Canada’s beauty, which he experienced growing up during family trips to B.C., Alberta, Manitoba, Quebec and the Maritimes. “Telling people about it made me want to go back and see that beauty again.”

Bauman resigned from his job and is putting his career on hold in order to do the trip.

“I thought it was more important to me at the time to do this than to continue a career,” he says. “I figure I can pick up a career when I’m done, but . . . this is important to me. I didn’t want to push it off to someday,” and then not end up doing it at all.

Bauman will be camping along the way, as well as staying with friends, people who are friends of friends, and people he has connected with over the Internet. “The part that I’m most excited about with that is meeting people along the way,” he says. “I’m really looking forward to the chance to meet families and hear their stories.”

Bauman’s ride has already attracted media attention in his city, as well as an endorsement from Waterloo Mayor Dave Jaworsky. Less than two weeks before starting the ride, Bauman had already raised $5,800.

“[Ten thousand dollars is] something far beyond what I’ve ever raised before or aimed to raise,” Bauman says, adding that the response so far has “been phenomenal.”

He is looking forward to the journey and to furthering the conversation about mental health. While society has come a long way in terms of breaking down the stigma surrounding things like depression, there is still more to do, he says.

“It is common, it is an illness just like any other illness, and people should not be ashamed or embarrassed to talk about what they’re going through,” Bauman says. “It can only get better by talking about it.”

For more information about the ride, or to contribute, visit mdsc.akaraisin.com/MartinsRide. 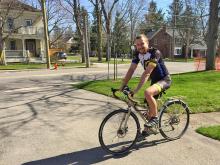 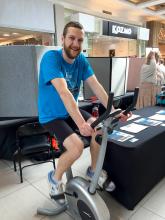 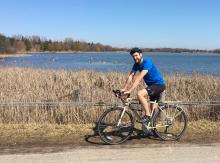