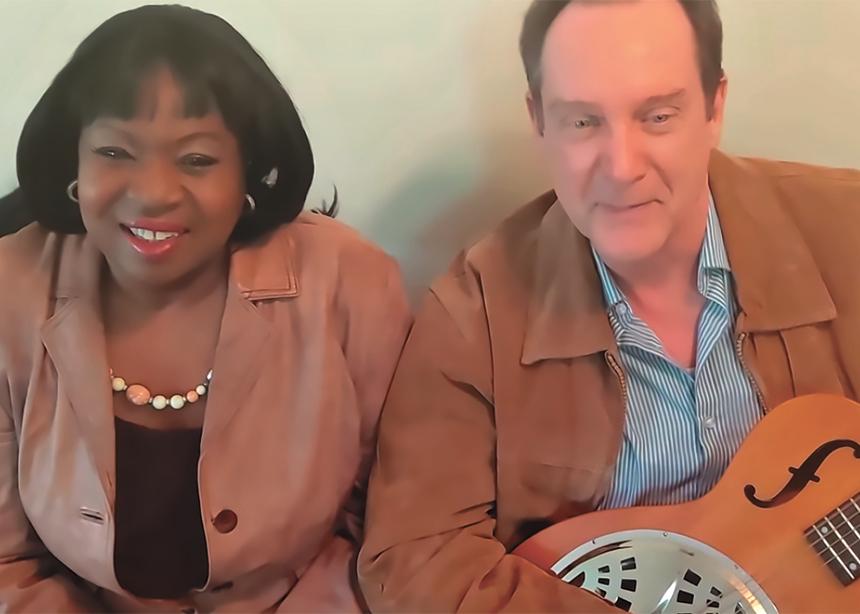 Diana Braithwaite and Chris Whitely perform ‘This Little Light of Mine’ as part of the Bechtel Lecture on blackness and whiteness in Anabaptist print and mission. (Screenshot by Janet Bauman)

Diana Braithwaite, an accomplished blues, gospel and jazz performer, and founder and director of the Rella Braithwaite Black History Foundation, where she researches, preserves and shares the story of Blacks in Canada.

Timothy D. Epp, an associate professor of sociology at Redeemer University, Ancaster, Ont., who researches Anabaptists and the “discourse of race in North America during the 19th and early 20th centuries’’ by studying their denominational publications.

Braithwaite shared several anecdotes she called “good news” stories from her ancestors’ experiences in early settlements in Wellington County, Ont. Black and Mennonite families “lived side by side,” their children played together, they shared farm equipment, helped each other with threshing, and shared food together at the end of the day’s work, she said. In these anecdotes she sees the “ability of human beings to connect and become friends despite their differences in religion or the colour of their skin.”

She and Chris Whitely performed “This Little Light of Mine” to end her presentation.

Epp began by acknowledging that, while there is no biological basis for race, the “lived impact” of race is very real, as expressed through the Black Lives Matter movement. He said that racist “seeds of violence are very present in Canadian society, and even within our own Anabaptist histories.”

In his study of Anabaptist-Mennonite newspapers and periodicals from the late 1880s to 1908, he found that Anabaptists sometimes challenged the dominant assumptions about race by emphasizing Christian unity and how the gospel is meant for all people. But he also found examples of how dominant cultural concepts of blackness and whiteness were “reflected and reproduced” in these same newspapers, and how they informed Mennonite mission activity in North America.

Epp gave examples of common stereotypes that portrayed whiteness as “standard” and blackness as “other” and therefore undesirable. In morality tales and other articles, whites judged the character of Blacks based on these stereotypes without challenging any of the social constructs in place.

He found that Blacks were portrayed as:

Epp said that positive friendships between Blacks and Mennonites blossomed in some places, even while Mennonites held “racialized ideas.” These personal encounters could be transformative, he said. “If you know somebody, you might change your mind,” because the relationship might “reveal the limitations of [your] preconceptions of race and identity.”

He described how Blacks in the Shiloh community in Saskatchewan developed friendships of mutual support with their Mennonite neighbours. However the Mennonite-initiated Western Children’s Mission, which aimed to “evangelize the spiritually destitute” by way of summer Bible school, saw Shiloh as part of its “foreign mission field,” even though it had a Black church with vibrant worship.

An object lesson used by the Western Children’s Mission portrayed a white heart as good and pure and a black heart as bad and sinful, in need of washing by the blood of Christ to make it “white as snow.” A Black mother found the object lesson offensive, arguing there was no biblical proof for the image.

Epp said he sees the way forward as “getting to know our neighbours” and living side by side in “mutual dependence.” These encounters “may be transformative” if we can see all humans as created by the same loving God. Furthermore, he said that whites need to undergo an “honest appraisal of our past,” recognizing how they are “privileged by our whiteness.”

In response to questions, Epp noted that his research is only “scratching the surface.” More needs to be done to find stories in Western Canada of relationships between Blacks and Mennonites. He also said that some of the history of the Black settlements in Wellington County is being reclaimed and restored as more research is done on how Mennonite settlers acquired land previously settled by Black pioneers. Mennonites are beginning to “awaken” to our connections to Black history, and see how our stories are “woven together.”

The 2021 Bechtel Lecture at Conrad Grebel University College was held for the first time in its 21-year history, without benefactor Lester Bechtel in attendance. He died in January, at the age of 91.

Marcus Shantz, Grebel’s president, expressed condolences to the Bechtel family and gratitude for the rich legacy of Bechtel’s vision to connect academic scholarship in Anabaptist-Mennonite history, theology and culture, to the wider community.

This article appears in the March 29, 2021 print issue, with the headline “Blackness and whiteness.” Do you have a story idea about Mennonites in Eastern Canada? Send it to Janet Bauman at ec@canadianmennonite.org. 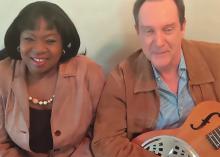 Diana Braithwaite and Chris Whitely perform ‘This Little Light of Mine’ as part of the Bechtel Lecture on blackness and whiteness in Anabaptist print and mission. (Screenshot by Janet Bauman) 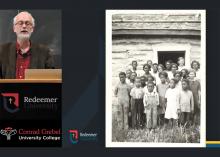 Timothy D. Epp, left, describes Black and Mennonite relationships in the Shiloh community of Saskatchewan in the 1930s as part of his presentation at Conrad Grebel’s 2021 Bechtel Lecture on blackness and whiteness in Anabaptist print and mission. (Screenshot by Janet Bauman)