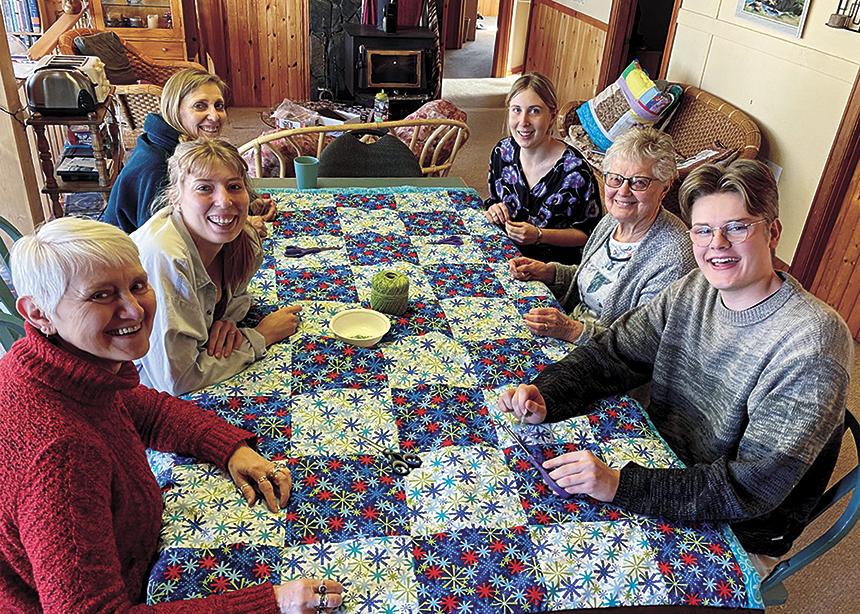 “For me, it’s just total enjoyment, and knowing that [they] will go where they’re needed,” she says.

Over the years, the group—which now includes Holdeman women and a range of other community members—has donated thousands of comforters to provide relief and comfort to families experiencing disaster and conflict around the world.

In response to the story of quilting in Zimbabwe (below), Hildebrand says it’s “a new twist” to think of people in other parts of the world also quilting, not just receiving comforters from here. “I will think about the woman in Zimbabwe when I quilt,” she says.

That makes quilting “more like doing it together with them instead of doing it for them, which is pretty neat,” Hildebrand says.

As part of its “Great Winter Warm-up” this February, MCC is encouraging people to gather friends and make comforters. For a booklet of creative and colourful design inspiration see mcccanada.ca/great-winter-warm-up.

– With files from CM

From cow manure to comforters

“It takes a long time because I don’t use a machine; I’m just using my own hands, putting these things together to make a meaningful thing,” says Addlight Mudombo of Joseph Village, Zimbabwe.

She learned to piece comforters from her sister, and her husband Elnathan Mboweni consults the internet to get ideas for designs. He makes the templates for the fabric pieces, which they cut from used, colorful clothing. Mudombo then stitches fabric triangles, squares and diamonds together in the evenings.

She has time to sew because her household workload has been reduced by a biodigester that turns manure into gas for cooking. Mudombo used to spend many hours each week collecting wood that she needed to cook her family’s dinner over an open fire. Dead wood is increasingly hard to find because of deforestation, so she and her friends walked long distances into remote and sometimes dangerous areas of the forest to find fuel.

Now, each day, she or her husband mixes cow manure with water and pours the mixture into the underground digester, which captures the resulting odor-free gas and supplies it to a hotplate in Mudombo’s kitchen.

Mennonite Central Committee partner Score Against Poverty helped Mudombo and Mboweni get the digester in 2022. 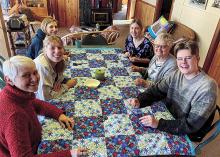 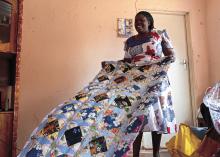 Addlight Mudombo of Joseph Village, Zimbabwe with comforters she sewed by hand from used clothing. (MCC photo by Meghan Mast)