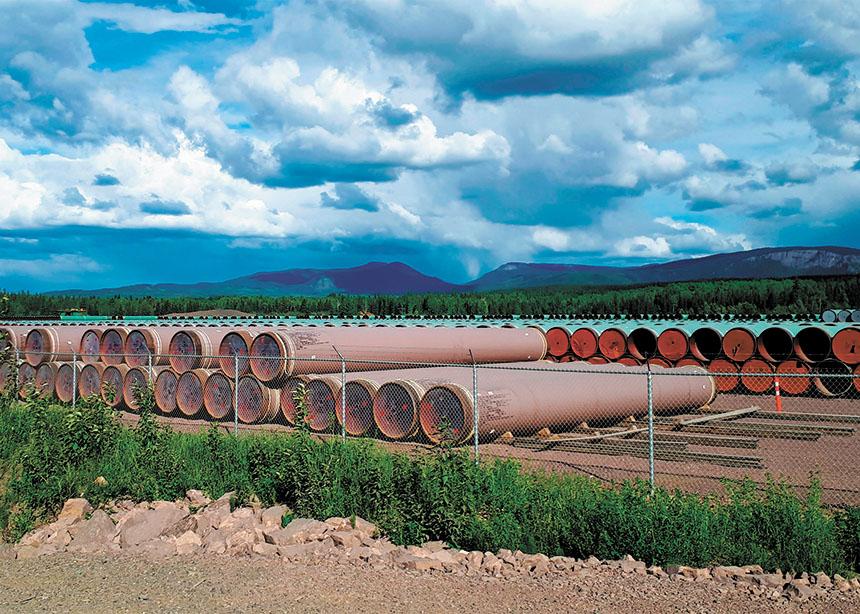 Piles of pipe for the Coastal Gaslink just outside of Houston, B.C. (Photo by Josiah Neufeld)

Mennonite Church B.C.’s Indigenous Relations Task Group, which is committed to creating redemptive relationships between settler Mennonites and their Indigenous neighbours, has officially registered its opposition to the Canadian Government’s support for two projects: the Coastal GasLink Pipeline bringing fracked gas from the Peace River to Kitimat, B.C.; and the Trans Mountain Pipeline bringing bitumen from the tar sands in Alberta to tidewater in Burnaby, B.C.

The document reads in part:

“In the interests of achieving the government’s commitments to reaching its climate targets and demonstrating a commitment to a social contract for reconciliation with Indigenous nations and climate-conscious citizens, we urge the government to halt present and future fossil fuel infrastructure projects to prevent further ecological damage and the erosion of trust with Indigenous nations.

“As the latest Intergovernmental Panel on Climate Change report makes plain, we have no time to spare. ‘The burning of fossil fuels and deforestation are choking the planet and putting billions of people in immediate danger,’ with Indigenous peoples and the poor particularly vulnerable. We also call on the government to cease subsidizing this industry with money from taxes coming from citizens that do not agree with the government’s actions in this regard.

“The Coastal GasLink and Trans Mountain pipelines contradict the government’s stated policy directions. We urge the government to aggressively move forward on its climate agenda as well as its commitment to reconciliation with Indigenous nations, as articulated in both federal and provincial legislation to honour and implement the UN Declaration on the Rights of Indigenous Peoples. These policy initiatives have our full support.”

The task group states: “These pipelines violate the fundamental right of free, prior and informed consent of Indigenous nations and contribute to escalating climate change. By granting approval to the Coastal GasLink pipeline, the governments of Canada and British Columbia fail to respect the Supreme Court of Canada’s 1997 ruling that Wet’suwet’en title constitutes an ancestral right protected by section 35(1) of the Constitution Act, 1982. Presently, construction of this pipeline is poised to destroy the ancient village site, Ts’elkay Kwe Ceek, that is culturally important and archeologically significant.”

Read the full statement at https://bit.ly/3AE41Q6. 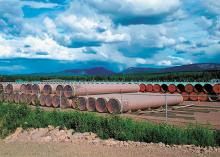 Piles of pipe for the Coastal Gaslink just outside of Houston, B.C. (Photo by Josiah Neufeld)

I feel the title of the article does an injustice to the writers of the letter. They are not 'protesting pipelines,' rather the writers are calling for Indigenous rights to be respected and our earth to be protected. I want to celebrate the writers of the letter! I understand that CM couldn't publish the letter in its entirety, but it's important to highlight this line: "We also recognize that the government and corporations have a monopoly on the power of the courts, RCMP and private security firms to push the pipelines to completion despite the lack of consent from Indigenous Nations and a growing number of concerned citizens." Great work MCBC-IRTG!

Still waiting for someone to address the conflict between the elected chiefs and councils who approved these projects and the hereditary chiefs who oppose them. Seems like the former group, even though they are a construct of The Indian Act, have a clearer mandate since they were elected by their people. But I’m certainly no expert.

In response to Dan Janzen - the Wet'suet'en elected chief and council have a mandate which covers only the reserve allocated to the nation by the colonial powers. The traditional chiefs claim authority in the full territory of the Wet'suet'en nation - and the defence of land and water against the gas pipeline is taking place outside of reserve, but on unceded Wet'suet'en territory. In 1997, in the Delgamuukw case (brought by the Wet'suet'en and Gitxsan), the Supreme Court of Canada recognised the existence of Aboriginal title as an exclusive and ancestral right to the land.

And please don't confuse elections with true democracy. Financial pressures on cash-starved and land-poor elected chiefs and councils mean that the power is all too often not with the people, but with Ottawa bureaucrats and opportunistic commercial colonisers.