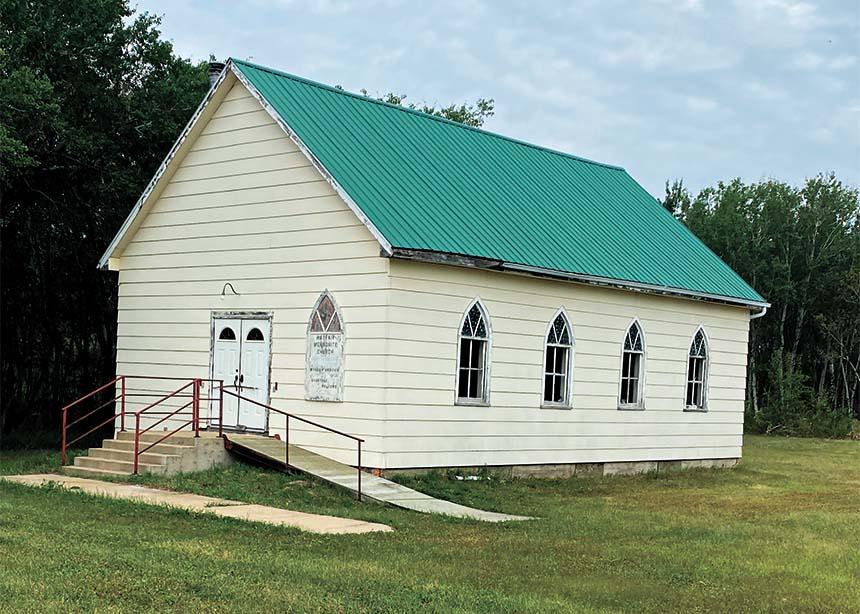 The Hoffnungsfelder Mennonite Church building in Mayfair, Sask. is no longer open for regular services, but a small group of members and former members still want to see it maintained. (Photos courtesy of Laura Toews)

The Hoffnungsfelder Mennonite Church, near the village of Mayfair, Sask., needed new siding and windows, but there was no money left in the operating fund. So the Toews family decided to hold a barbecue.

“Our family has been part of that church from when it was first built,” says Laura Toews. “My grandfather was a lay minister.”

Laura worked with her sisters, Teresa Toews and Dorothy Reinbolt, to plan the fundraiser. They decided on a barbecue because it was something they could do outdoors. They advertised locally but also contacted relatives across Canada, inviting them to make a donation if they couldn’t attend.

About 60 people attended the August 14 event on the church grounds, including area residents and people from farther away who had grown up in the church.

According to the Global Anabaptist Mennonite Encyclopedia Online (GAMEO), Mennonites immigrated to the Mayfair area, about 140 kilometres northwest of Saskatoon, in the late 1920s. They joined Mennonites from Glenbush, Rabbit Lake, Mullingar and Bournemouth to form the Hoffnungsfelder Mennonitengemeinde, a large church with five small member congregations. Though officially registered as Bethel Mennonite Church, it has been known in Mennonite Church Saskatchewan as Hoffnungsfelder Mennonite, Mayfair.

In 1934, the congregation purchased land and built a church building. Laura says that, sometime later, members dug out the cement foundation by hand so they could add a basement.

Though regular services haven’t been held in the building since 2017, the church continues to host a Christmas service each year on December 23 at the community hall in Mayfair. Regular attenders include members of the Mayfair Roman Catholic Church and other area residents.

“It’s the only one around where we still sing the traditional Christmas hymns,” says Laura.

The last Christmas service was held in 2019, and she says that, if allowed to do so because of the pandemic, the tiny congregation will probably host the service again this year.

The church has never officially closed. Laura says her sister, Teresa, files taxes for it each year, just as their father did before her.

“I don’t know why church was never closed,” Laura says. The building is left unlocked, and a guest book at the front indicates there are several visitors each year.

“There’s nothing of value [in the building] other than memories,” she says. “The hymnbooks are kept in [someone’s home] because we didn’t want them to get ruined.”

The Toews family raised $3,500 for the church. They know they will have to do more fundraising if they are to pay for new siding and windows. But they are committed to maintaining the structure.

“We want to see the church maintained for historical purposes,” says Laura. “It was a focal point for our family—for my dad and his siblings—and for a handful of other community folks who attended right up until they had to move into care in the city.” She adds, “Our goal is to maintain it and the grounds and graveyard out of respect for the history.” 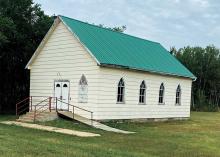 The Hoffnungsfelder Mennonite Church building in Mayfair, Sask. is no longer open for regular services, but a small group of members and former members still want to see it maintained. (Photos courtesy of Laura Toews) 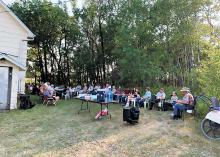 Former members and friends of Hoffnungsfelder Mennonite Church in Mayfair, Sask. gather for a fundraising barbecue on the church grounds.