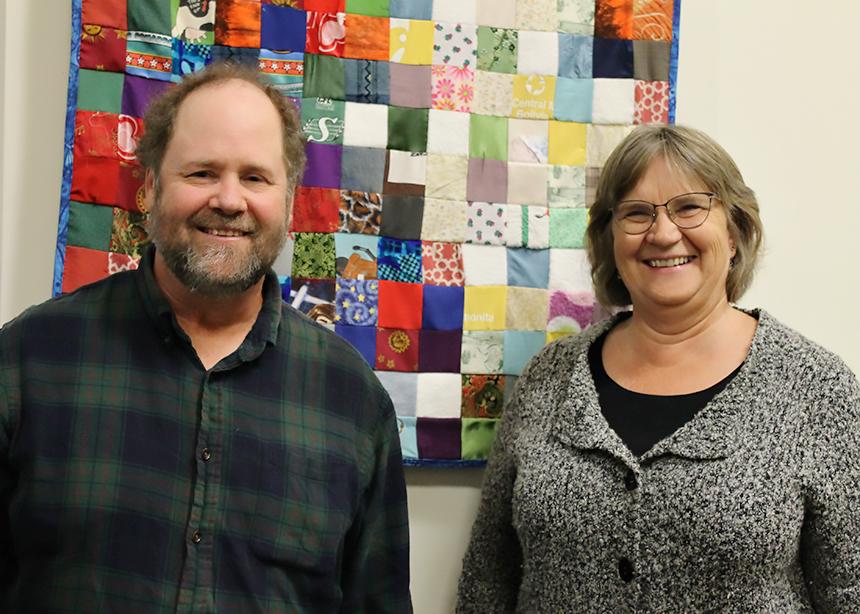 A solitary candle flickers on a low table in the middle of a darkened room. Participants chat quietly with one another as they wait for the session to begin, having come to partake in an hour of centring prayer and sharing.

Melody Neufeld and John Gascho launched the centring prayer group in late August. Both are members of Mennonite Church Saskatchewan’s Spiritual Resource Committee, which, throughout the past year, introduced congregations to various forms of prayer. Centring prayer was one of those forms.

Both Neufeld and Gascho were familiar with, and had practised, centring prayer as individuals. But Neufeld says that when she travelled to the Center for Action and Contemplation in Albuquerque, N.M., she learned how powerful the experience could be when done in a group.

Gascho, likewise, felt that since they had introduced centring prayer to the regional church, it was now time to put it into practice.

And so the two invited individuals they knew had interest in contemplative prayer to be part of a group that would meet regularly for prayer and sharing.

A centring prayer session begins as participants choose a sacred word that will remind them of God’s presence. During the silent prayer time, as they find their minds wandering, they repeat the sacred word as a way of returning to centre.

Citing founder and practitioner Thomas Keating, Neufeld likens centring prayer to standing on the shore of a river and watching one’s thoughts float by as if they were boats on the river. “The trick,” she says, “is not getting into a boat.”

Centring prayer, she says, is about sitting in silence and being open to what God has to say. “You might be bringing yourself back a billion times in a 20-minute sit,” she says, “but that’s a billion opportunities to recall your intention.”

Gascho suggests that it is a matter of practice. “The thoughts will subside the more you practise,” he says assuredly. “The ego will soften and will give way to the present moment.”

“I like the word ‘practice,’ ” says Neufeld. “None of us has arrived. It’s not about the goal, it’s just about the doing.”

Praying in darkness is significant for Gascho. “Darkness is a medium that provides a place for new beginnings,” he says. “When you plant a seed in soil [it] becomes accustomed to its surroundings. As rain and nutrients come, the seed swells and grows.” In the same way, he says, “we grow in darkness as God provides what we need for the journey. . . . Prayer is very simple, and yet very basic truths are often the most profound.”

“My hope is that a space is created for people to come and practise centring prayer together,” says Neufeld, adding, “We also spend part of the evening sharing about what is going on in our lives. I hope we can provide space for those things to happen.”

The centring prayer group is open to anyone who wishes to participate. The group meets on alternate Tuesday evenings at Osler Mennonite Church. 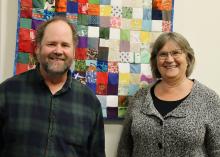 I would urge anyone considering exercising centering and contemplative prayer to research this matter as it pertains to its place in the occult. Learn from accounts of people who have experienced the presence of spirits that are not from God as a result of "praying" this way. Compare what is said about this method of prayer to what Scripture says about how to pray, and you will receive clear direction as to how to pray according to God's will.

If doing the research online and searching for God’s truth in the Scriptures is too much for you to do, at least look at this through the lens of common sense. How much more will we hear from God by prayerfully reading His word for twenty minutes versus repeating a single word over and over and over again in the same amount of time? Think about it.

I would urge anyone considering exercising centering and contemplative prayer to research this matter as it pertains to its place in the Church. Learn from accounts of people who have experienced the presence of the Spirit of God as a result of praying this way. Compare what is said about this method of prayer to what Scripture says about how to pray, and you will receive clear direction as to how to pray according to God's will.

If doing the research online and searching for God’s truth in the Scriptures is too much for you to do, consider engaging the services of a Spiritual Director, a person who tries to immerse herself or himself in intense and sustained communion with God. Read the writings of Christian mystics, both ancient and modern, from throughout the last 2,000 years of Church history. And look at this through the lens of common sense. How much more will we hear from God by prayerfully listening for His Word for 20 minutes, whether through devotional reading of the Bible or through devotional repetition of a single holy word over and over again in the same amount of time? Think about it.

Can you show us from Scripture where God tells His people to "...choose a sacred word that will remind them of God’s presence. During the silent prayer time, as they find their minds wandering, they repeat the sacred word as a way of returning to centre"? If there is such a directive, I've missed it.

By no means am I an authority on prayer, or have I experienced the 'centered prayer' as described in the article; I have much to learn on how to communicate with God. I do know, that when I pray alone, my mind will often wander, and I ask God's forgiveness for not staying focused. If saying a spiritual word, to draw me back into communicating with God helps, I will. That word is a tool, a reminder to stay with the conversation. Conversation is talking and listening. What words or Word would I use for this prayer style? I AM, Jesus, Love, ... would I listen to the beating of my heart thumping God's rhythm "loving God / loving neighbour" or "listening God / loving God"... Would that bring me back to communicating, to listening for God to speak? To expressing my love of God from the depths of my beating heart? To bring me beyond listing my concerns and needs? How do I pray? How do you pray? There is much to learn about communicating with a loving God.

Thank you, Denise, for sharing your honest thoughts regarding this topic. I’m no expert on prayer either, but thankfully we don’t need to be experts—just faithful and obedient to God. I hear your concern loud and clear regarding a wandering mind during prayer. I’ve certainly experienced that frustration far too many times, and keep needing to ask God for help in that area. My prayer life is very much a work in progress, and as such I keep it very simple. Nothing eloquent, that’s for sure, but do strive to keep it in line with Scripture.

There’s a little more I’d like to add to this topic of prayer. As great as God is, with His thoughts so much higher than ours, He still delights in the prayers of His children (Proverbs 15:8). Isn’t that a wonderful thing?! Of course, our part is to be mindful of keeping an attitude of humility before Him (2 Chronicles 7:14) and to always pray according to His will—“ Now this is the confidence that we have in Him, that if we ask anything according to His will, He hears us.” (1 John 5:14)

God is so good! He hears the praises and requests of His children when offered by faith in Him. And He provided us with much plainly worded instruction in Scripture regarding prayer (often referred to as “asking”). I’ll close with one of my favourites: “Be anxious for nothing, but in everything by prayer and supplication with thanksgiving let your requests be made known to God. And the peace of God, which surpasses all comprehension, will guard your hearts and your minds in Christ Jesus.” (Philippians 4:6-7)

I think that the term emergent church is basically defunct at this point - there was a lot of interest in the term in the early 2000s but by 2010 or so most of the more popular folks who were associated with it (people like Brian McLaren, for example) moved on to other labels or descriptions. Some of the history of the term comes from Phyllis Tickle, although the comments above may not relate to her use of the term.

Quotes (taken from the linked review):
“Arguably, one of the most potentially destructive things that can happen to a faith is for it to become the accepted and established religion of the political, cultural and social unit in which its adherents live.”

“Emergents, because they are postmodern, believe in paradox; or more correctly, they recognize the ubiquity of paradox and are not afraid of it. Instead, they see in its operative presence the tension where vitality lives.”

There are differing opinions regarding the state of today's emerging church, but here's an article that can serve to help one evaluate your church as to whether or not it's been bitten by the "emerging bug":

Many signs of the Emerging Church Movement that are listed in this article appear to be alive and well in Mennonite churches in Canada. It's a very serious matter, as the eternal ramifications are great! Many people are being led down a wrong path because of changes within the church that have occurred over the last couple of decades, whether or not they have been labelled as "emerging."

From my distinctly postmodern perspective: I think it's somewhat more likely that fundamentalism is a religious movement that developed and thrived in a particular cultural moment which has now passed, and it's pretty clear that the gospel that folks like me were handed was cluttered with a lot of cultural baggage that we have no choice but to pick apart.