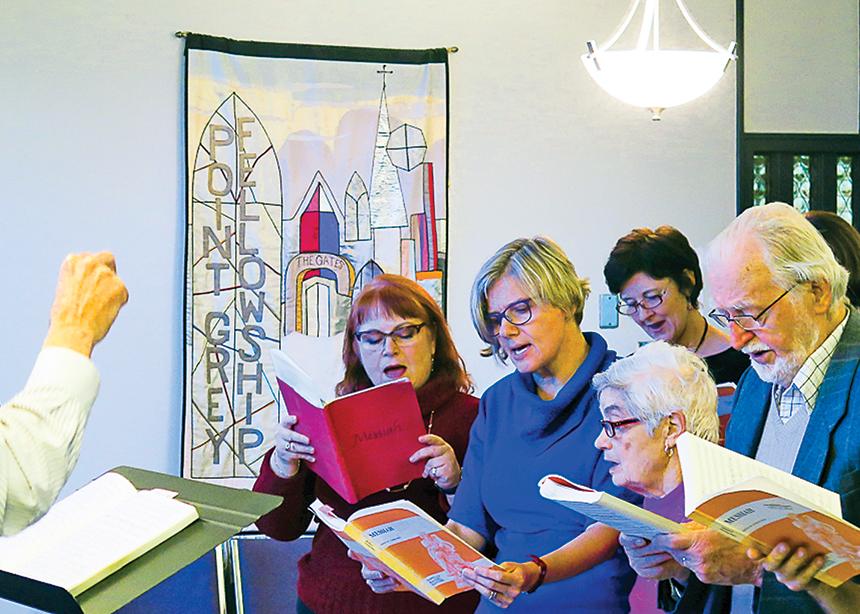 On a Sunday in Advent, Point Grey traditionally sings the Christmas portions of Handel’s Messiah. This photo was from the fellowship’s 2015 rendition. (Photo by Janice Kreider)

Point Grey Inter-Mennonite Fellowship asked the British Columbia Conference of Mennonite Brethren (MB) Churches to be released from conference membership, which was granted on Aug. 15.

In its letter of request, the church wrote: “Given the . . . requirement that every church be led by a pastor [or designated leader], we acknowledge that we are not aligned with the bylaws and polity of the MB Conference. We have therefore decided to request to voluntarily withdraw from the BC Conference of Mennonite Brethren Churches . . . .”

Since institutions such as Columbia Bible College and Mennonite Central Committee have been effective for many decades, in part because they are inter-Mennonite, Point Grey wished to bring that same level of cooperation to the congregational level in British Columbia.

While many individuals felt that it was about time this was happening, certain MB leaders were not pleased that Point Grey wished to relate to both of the province’s two major Mennonite conferences. “You can’t serve two masters,” was a phrase used.

Point Grey’s leaving was a “prayerful and deliberate . . . process of discernment over the past several years . . . and [the church] came to a unanimous decision at our annual meeting on Jan. 29, 2022,” the letter stated.

Signed by church moderator Veronica Dyck, the letter continued: “We deeply care about our relationships and connections with Mennonite conferences and institutions.”

Point Grey continues as a member of Mennonite Church British Columbia and, at the same time, continues to support several MB-related institutions.

From its inception in 1986, the fellowship was openly inter-Mennonite. That small group formed the core of a much larger group that purchased a former convent near the University of British Columbia (UBC) campus, establishing the Menno Simons Centre as a university student residence.

The fellowship’s founders, representing at least three Mennonite groups, decided to meet Sunday mornings for worship in the centre’s chapel. By renting the chapel, the fellowship helped the centre meet its substantial monthly mortgage payments. By hiring neither a pastor nor staff, the fellowship’s members were able to make additional donations to the work of the centre.

A key feature of Point Grey’s services is the 15 to 20 minutes of discussion immediately following the sermon, when the whole fellowship reflects and comments on the morning’s topic and readings.

J. Evan Kreider, a founding member, said, “We learned to listen to each other and hear divergent views, acknowledging the different heritage each brought.” He noted that Jesus’ disciples didn’t always agree, either with each other or with Jesus, and the leaders of the early church had serious differences of beliefs. But they learned to continue working together and together.

Another of the fellowship’s founding members, John Friesen, has been active in the MB conference both provincially and nationally his entire life. The fellowship’s leaving that movement has been difficult for him and others. Friesen said of the decision: “[W]e couldn’t meet the [MB] bylaws. . . . We don’t have the leadership style by which they operate. . . . The centralization of power is the problem. . . . Control is the issue. . . . The new bylaws give the MB Executive more power.”

Selling the centre’s building meant that its chapel is no longer available for the fellowship’s services. Since the sale coincided with the arrival of COVID-19, Point Grey’s 50 congregants have met primarily on Zoom.

Even though it has many commuting members, the fellowship is looking forward to meeting in person, possibly monthly, with other services continuing to be held on Zoom.

The Pacific Centre for Discipleship, which owned the centre, is developing plans for a much larger student facility and chapel across the streets from both the UBC and Regent College campuses. 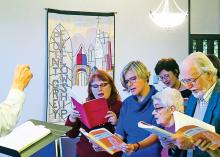 On a Sunday in Advent, Point Grey traditionally sings the Christmas portions of Handel’s Messiah. This photo was from the fellowship’s 2015 rendition. (Photo by Janice Kreider)