Playing for fun and credit 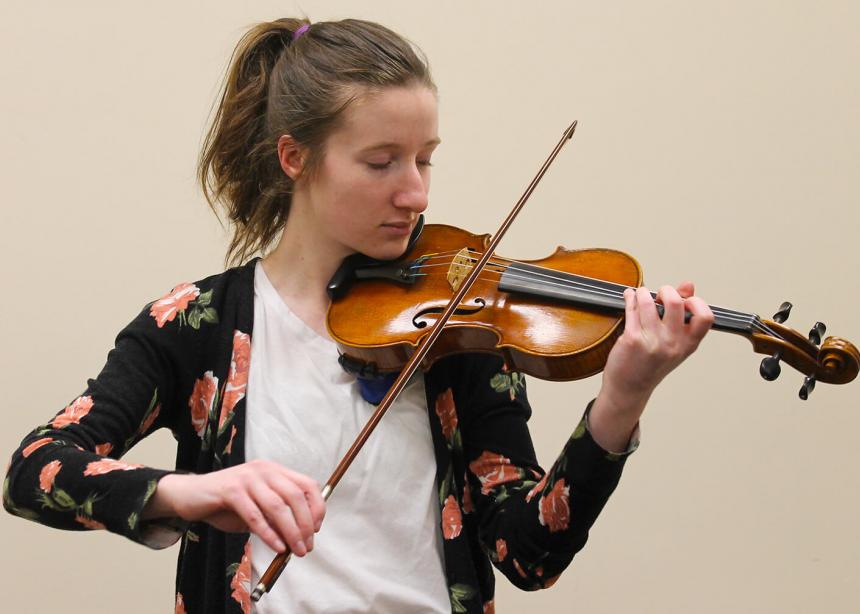 Legendary rock ‘n’ roll drummers Keith Moon and Neil Peart inspired Matt Schellenberg to get into percussion, but it’s Bach and Beethoven that he will be playing when he performs next month.

Schellenberg is one of a handful of young adults who are members of the Mennonite Community Orchestra (MCO) in Winnipeg. The MCO is the orchestra-in-residence at Canadian Mennonite University (CMU) and consists of more than 50 professional and amateur musicians; it will perform its annual spring concert on April 9, 2017, in the chapel at CMU.

Five CMU students are performing with the MCO and earning school credit in the process.

“I’ve always kind of wanted to play percussion [in an orchestra] and didn’t have that opportunity in high school,” Schellenberg says when asked why he joined the MCO. “The credit was just a nice bonus.”

The 22-year-old grew up in Saskatoon and belongs to Nutana Park Mennonite Church there. Being a part of the MCO, which performs two concerts annually—one in the spring and one in the fall—has been positive for Schellenberg. “The pieces we’re playing are excellent,” he says. “It’s a lot of fun.”

Anna Lysack, a 19-year-old history major from Brandon, Man., enjoys being a part of the MCO because it gives her a reason to play her violin now that she’s no longer taking lessons. During her first year at CMU, she sang in a choir and pursued other co-curricular interests. While they were positive experiences, she missed her violin.

Now in her second year at CMU, playing with the MCO has remedied that. “I was busy with other things [last year] and I wasn’t playing my violin as much,” she says. “That was okay, but I missed it. Orchestra was a way to have something to work on, to have music to be playing and that kind of thing.”

Dayna Wiebe got involved with the MCO for similar reasons. The 19-year-old grew up in Calgary at Trinity Mennonite Church. She began playing the clarinet in Grade 7.

“I wanted to keep music in my life [at CMU] really badly, and I wanted to keep playing the clarinet, and this was a [good] option,” she says. “It was on campus, it was intergenerational. . . . I’d never been in an orchestra before, so it was new and exciting.”

MCO conductor William Gordon praises the work that the young CMU musicians are doing as part of the orchestra. All of them have to pass an audition before joining.

“The students are warmly welcomed into the orchestra, and it is a challenge for them,” says Gordon, a semi-retired music professor at Brandon (Man.) University. “They have to work hard at [the music] and they do work hard at it, and that’s appreciated by myself as the conductor and by the other musicians.”

Lysack enjoys the MCO because it allows her to interact with people who are a variety of ages, ranging from teenagers to people in their 80s. “It’s cool how there’s different ages and skill levels,” she says. “People of [higher] skill levels can help me improve.”

Wiebe agrees, adding that playing in an orchestra for the first time is thrilling. “I really enjoy it,” she says. “It’s a new opportunity to be part of an orchestra. I’ve never had that opportunity in my life yet, and it’s been such a good first experience.” 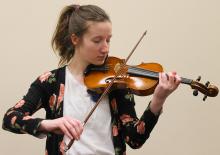 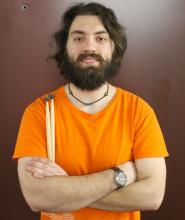 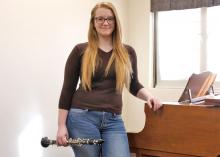