Planting seeds in their community 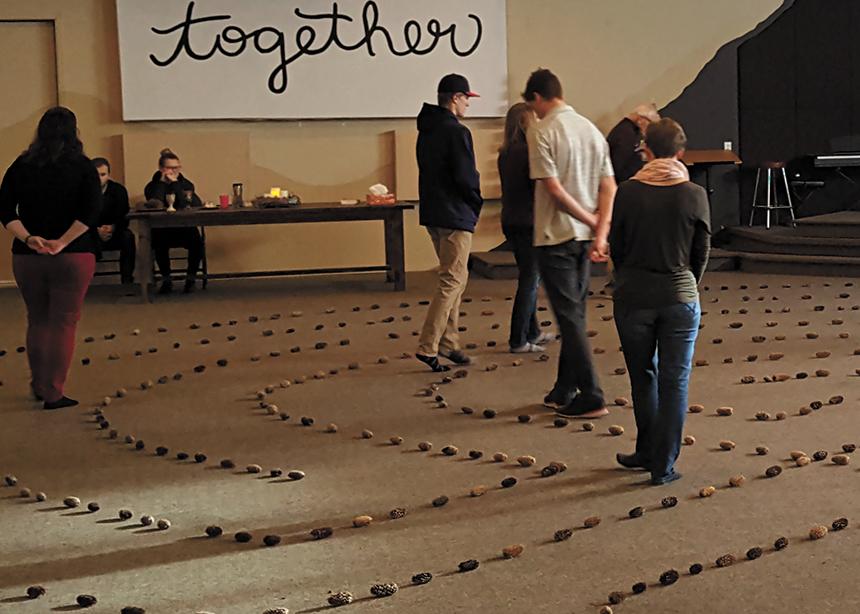 Congregants walk a labyrinth set up in the church, a rich tradition at Seeds. (Photo by Ted Enns-Dyck)

Seeds Church celebrated its 20th anniversary on the first Sunday of 2020. But instead of throwing on party hats and revelling in the past two decades, the congregation faced forward and asked the question, “What about the next 20 years?”

Seeds is a grassroots community church in Altona that was born at the turn of the millennium. Started by co-lead pastors Ted and Darlene Enns-Dyck and a group of 13 others, the church has since grown to 250 people, with about half that number worshipping regularly on Sunday mornings.

On the church’s 10th anniversary, the pastors put a big emphasis on celebration. They held a church retreat, which 140 people attended instead of the usual 80. They made videos and photo collages. They ordered a huge cake. They wanted to recognize the important milestone of their new community making it to 10 years.

The Enns-Dycks had begun planning festivities for this year too, including a weekend conference and concert. But they were also passionate about dreaming for the future and involving more people in the process, and they began to realize they wouldn’t have enough energy and resources for both.

“Right now it feels like we want to put the energy into thinking about how we can engage our community. That’s been a big part of the conversation . . . more thinking outside of ourselves rather than thinking about ourselves,” says Ted.

So they dove right in. Ted and Darlene met with the police chief, the town council, the mayor, the chief administrative officer of Altona, and several local non-profit organizations, asking them all three questions: “What do you see as being the major needs of our community? What isn’t happening? Who’s falling through the cracks?”

“We just made a laundry list of what people were saying about our community and we started to see certain bubbles of issues that pop up,” says Ted, of the conversations that have been going on for about a year now. “So we started trying to see where the needs of our community maybe fit the resources that we have . . . or where we have skills.”

That’s not to say that the Seeds congregants didn’t celebrate at all. On their anniversary Sunday, they had a potluck breakfast, ate birthday cake and sang together. The pastors asked a few people to share reflections, and then opened up the mic to everyone. More and more people kept coming to the front, eager to share memories.

“It was quite low on hype or bells and whistles, but it was really a beautiful relational sharing time,” Ted says.

Raven Nickel was one of those asked to share. Her parents were part of the group that started Seeds, so she was one of the church’s first children, being only about 7 when it began. Several years ago she got married in the church and now she is part of the visioning leadership team, which helps the pastors discern what direction the church should go in.

“It’s kind of been my most consistent home throughout my life, like I remember just always feeling like Seeds was the place that I found most of my identity and felt the most safe at,” says Nickel. “I think that was very grounding for me, to have that kind of community. I would give quite a bit of credit to that community in shaping me into the person that I have become.”

Seeds is involved in its immediate and broader communities. It has sponsored newcomer families and helped them adjust to life in rural Manitoba. It has held fundraisers for people in the community who aren’t connected to the church. It is figuring out how to revamp the building and some additional land the church owns so it can be used for community needs, such as programming or transitional housing.

Nickel says the people at Seeds “have a desire to be involved and a desire to do good work in the community, and not remain a stand-alone church. . . . It’s so much more than a place for people to come on Sunday morning.” She adds that many other churches are probably like Seeds, but it is exciting to see it happen firsthand.

“The fact that . . . in a church context wanting to move forward with their ministry, one of the first things they do is talk to other leaders in the community. That just excites me,” she says, “because it’s like we’re actually doing something that’s relevant and that could make a difference for lots of people.”

Ted says that Seeds still wants to meet with several other groups, and the church is hoping that by summer it can start putting some more concrete plans in place. 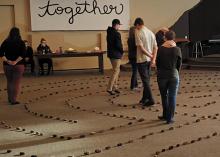 Congregants walk a labyrinth set up in the church, a rich tradition at Seeds. (Photo by Ted Enns-Dyck) 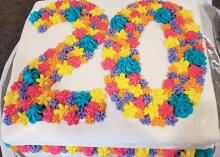