Church programs come and go, but the picnic remains a staple in Alberta churches 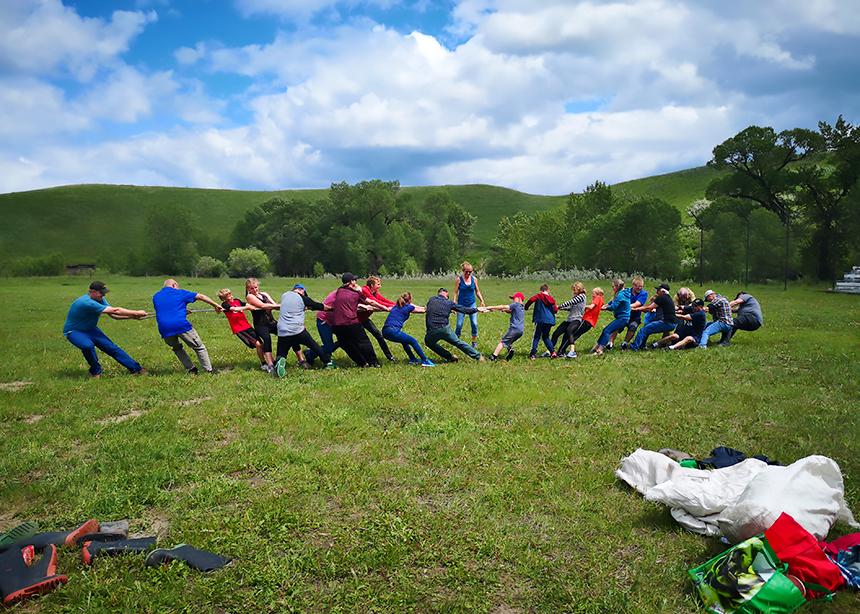 Many church programs eventually come to an end, but there’s one event that still remains after many decades—and that’s the church picnic!

Almost every church in Alberta had a church picnic this summer or was invited to join one, because Albertans love them. Even the bad weather does not deter them, like at Edmonton First Mennonite, where they now set up inside the church just in case, and move outside if the weather is nice. Calgary First Mennonite, which meets at Camp Valaqua, plans a service inside the building and then moves outside, rain or shine, for games.

Games, food, intergenerational fellowship and being outside in God’s creation are always ingredients for a successful picnic recipe.

Pastor Will Loewen of Trinity Mennonite near DeWinton, says, “Picnics are one of the activities that is low maintenance. Just throw out a blanket, bring food, and the kids always love to play! The communal element of eating food and organized play is what makes picnics so popular.”

Trinity Mennonite has done a variety of things over the years. Last year it had carnival-themed games like hitting a hammer to ring the bell, sitting on a chair and risk being dunked in water, and a bouncy castle.

Eight-year-old Sebastian Loewen says his favorite activity this year was the water balloon game, describing how participants loaded a blanket with water balloons and tossed them up and down until they broke one by one.

Every year, the games change, but there is always a wiener roast and ice cream made with an old-fashioned bucket and turner.

Some picnics are very relaxed, like at Holyrood Mennonite Church in Edmonton, where everyone just sits on the front lawn and enjoys burgers and fellowship. This year Holyrood invited the Chinese Mennonites from Edmonton Christian Life Community Church to join in the fun.

Other picnics are more intense, like at Springridge Mennonite Church in Pincher Creek, where it is a full-day affair with a potluck lunch and a barbecue supper.

According to Pastor Tany Warkentin, someone always organizes the games, which must include a sack race, three-legged race and running race. This year there was a gumboot toss that involves participants choosing a boot and seeing how far they can throw it. Water balloons, treasure hunts, and a baseball game with a break midway for watermelon, are all part of the fun. Inter-generational games are highly encouraged, including races that involve an older blindfolded person carrying a younger person who gives instructions on how to run through a set course. In the baseball game, kids are given unlimited swings and older people who can no longer run can choose a young person to run in their place.

Edmonton First Mennonite officially marks the end of Sunday school by acknowledging its Sunday school teachers and having classes present what they have learned over the year. Graduates are also recognized, but, according to Esther Siemens, “the real highlight [is] the water balloons!”

Each picnic is special and unique.

At Calgary First Mennonite, a traditional picnic game involves three people racing on one set of skis that were handmade decades ago by Rudy Janssen Sr. He also made wheelbarrows with saddles. There is always a candy toss, and, of course, no picnic in Alberta is complete without water balloons. Who can toss a water balloon the farthest to their partner without it breaking?

Summer is now coming to an end, but one thing is sure, there will be church picnics galore once again in 2020. And if you live in Alberta, there will be water balloons! 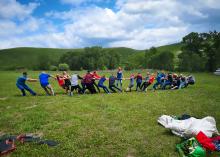 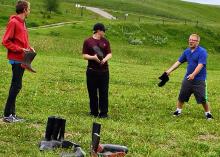 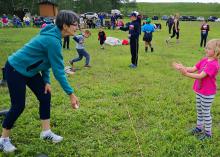 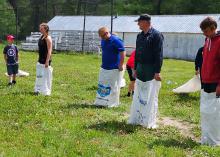 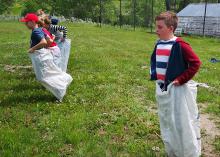 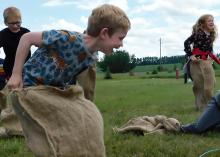 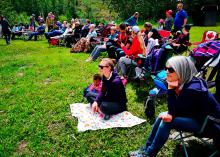