Pianist dedicated her hands to God 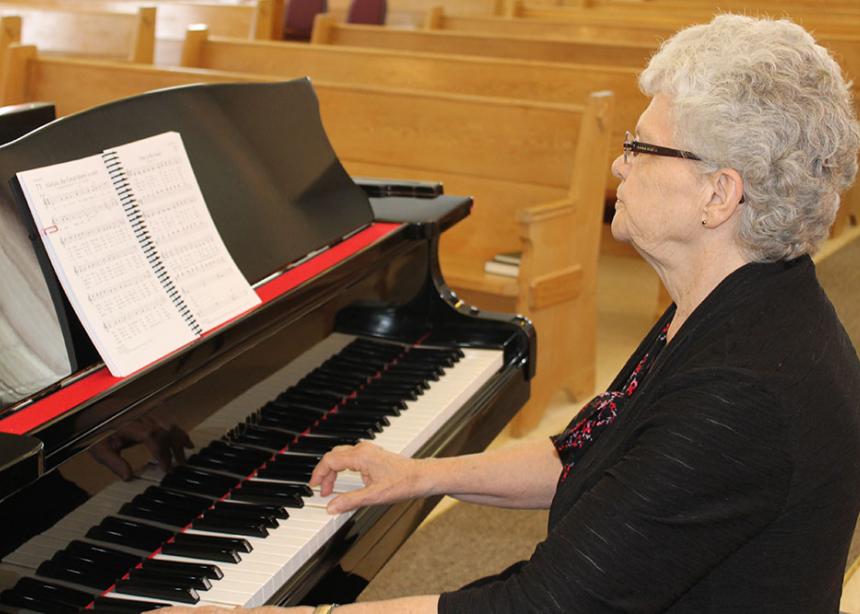 <p>Lydia Derksen plays the piano in the sanctuary of Bergthal Mennonite Church near Didsbury, Alberta. She has played for the choir and congregation for 65 years. (Photo by Donita Wiebe-Neufeld)</p>

Derksen remembers being excited that her elementary school had a piano, but greatly disappointed when the teacher said, “at recess you go outside, you don’t play the piano!”

She fondly remembers getting a piano at home. “That day I came home from school and the piano bus was backed up to our house was one of the happiest days of my life!” She started lessons the same day.

Derksen began playing for the congregation well before most pianists would have considered themselves able to do manage the task; she was only 13. “I didn’t feel I could play for the church either, but my dad was the minister and if he said you are playing—you played,” she laughed.

When she was 14, Henry Hamm organized a choir and Derksen was the pianist. Hamm would bring his guitar to the Derksen home and together they picked out simple songs such as, “I have decided to follow Jesus.” She also took lessons focussing on playing for church. “My piano teacher helped me learn the songs. Each lesson I got two songs from the hymnal or for the choir.”

Another important part of her education on the piano was tied to the annual Songfest event that brought Mennonite churches from across the province together for a weekend of music and fellowship. K.H. Neufeld was a choir conductor and a big part of Derksen’s musical development.

“[He] used to come to all the churches and do a cantata. Three days at each church [to practice] then at Songfest we would sing it. . . . K.H. stayed at our place. After school we’d work on it. Then, we’d come home from choir and practice till midnight. Then up at 6 a.m. to practice before going to school. It was learning by fire!” Derksen said. “Playing for church, the congregation, the choir, is not being a pianist. It’s being an accompanist. . . it is a learned skill.”

Asked what has changed in 65 years, Derksen said; “We had just gospel songs back then. Songs of praise. Now we sing faster and with more emphasis. . . . Four parts was always very important, now more is focused on the lead voice. I like the new songs, I just have some trouble with them. . . syncopated rhythm is not what I learned.”

As of May 26, 2015, Derksen has stepped down from playing for the choir, wanting to stop while she is still playing well. An experience with lung cancer pushed her decision. In Feb. 2014, Derksen underwent surgery followed by 16 weeks of chemotherapy.

“Since I’ve had my cancer, piano playing has been different,” she said. The cancer is now in remission, and even though she will not play regularly for the choir, Derksen will still take her turn as accompanist for congregational singing.

The Lord has certainly blessed Lydia Derksen’s hands, and blessed many people through her 65 years of dedicated music ministry.

Lydia always encouraged the younger players at church. She would listen to our worries about not being good enough, how maybe no one would like the way a song will be played, or messing up. Lydia would have a positive response to every question or concern. The best one was "Well if you play a wrong note don't flinch. Just act like you wanted that note there and no one will know the difference. "

I was very touched by your "Dedication of your Hands to the Lord"! What a decision at that young age to dedicate part of you to The Lord. To see how many years the Lord gave you Grace and Joy to play for Him!! I love the hymns still, the words are so deep from the heart of the writer and to God given the Glory!! I sang in the choir for years and in the Songfests in Alberta. The choice of songs from the choir director were marvelous and as a pianist it must have stirred your heart as well, especially when you have such a close relationship with the Lord. May He grant you Grace and Joy as you continue to touch the ivory keys of the piano and make music for yourself and others and for the Lord.