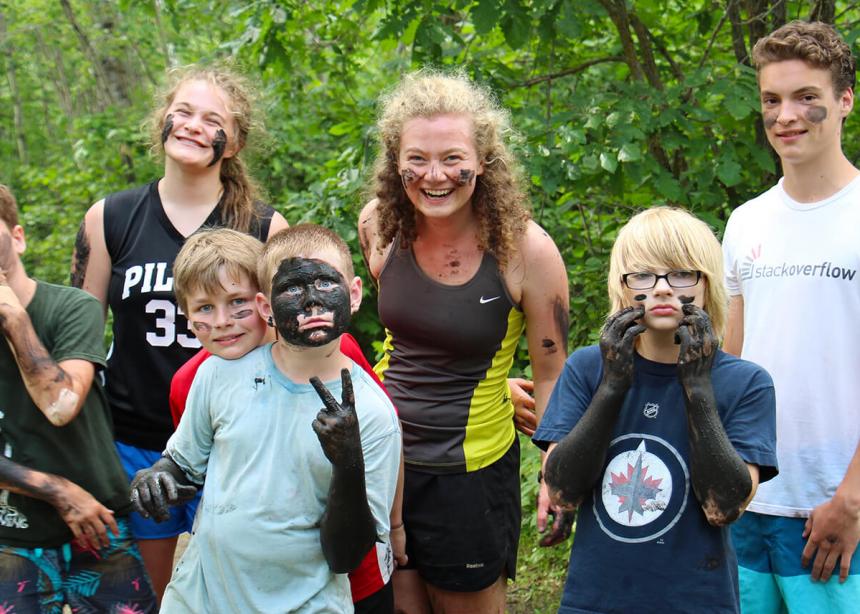 For Canadian Mennonite University (CMU) student Erin Froese, taking a break from studying in the classroom has allowed her to pursue her interest in healing broken relationships between indigenous and settler peoples.

Feeling exhausted when her semester ended this past December, Froese decided to take the current semester off. That meant the 21-year-old environmental studies major was able to say yes when she was offered an internship at Mennonite Church Canada to co-organize the upcoming Pilgrimage for Indigenous Rights with Steve Heinrichs, director of indigenous relations.

Starting on April 23, 2017, in Kitchener, Ont., 30 to 50 walkers will journey 600 kilometres, arriving in Ottawa on May 14. MC Canada is co-planning the event with Indigenous Peoples Solidarity of Christian Peacemaker Teams. The goal of the pilgrimage is to raise awareness about the United Nations Declaration on the Rights of Indigenous Peoples (UNDRIP). The Canadian government has withdrawn its “objector status” to UNDRIP.

She adds that the pilgrimage will allow her to physically respond to the shifts her thinking has undergone in recent years at camp and at CMU in relation to topics like indigenous-settler relations and land rights. “I’m looking forward to this movement of my body alongside this movement of my thoughts and where my heart is going,” she says.

For Froese, who is helping organize the pilgrimage as part of an independent studies project at CMU, the work is personal. Her late grandfather, Ike Froese, was a predecessor to Heinrichs in his work with indigenous peoples.

Froese has also spent the last 12 summers as a camper and then a staff member at Camp Koinonia, one of three camps that belong to Mennonite Church Manitoba’s Camps with Meaning ministry.

In 2015, she learned that Camp Koinonia, located three hours west of Winnipeg in Turtle Mountain Provincial Park, is situated on Crown land that is sacred to the Dakota peoples.

Working as the camp’s nature instructor at the time, Froese decided to research the history of the land the camp occupies. Her aunt, who lives in nearby Boissevain, connected her to an historian and a Dakota elder, who travelled to the camp to meet with Froese and the rest of the leadership team prior to the start of camp. The two men spoke to Froese and her colleagues about the importance of the land to the Dakota peoples, and the damage and brokenness they felt being separated from it.

“That was a big realization for me,” Froese says. “I struggled with these feelings for a while, knowing that I had the privilege of being at this place that was important and sacred to me, at the expense of someone else’s relationship with that spot.”

“That’s kind of when these topics of connection to land, land rights and indigenous territories became more personal and more real in my life,” she adds.

Helping to organize the Pilgrimage for Indigenous Rights, which is intentionally ecumenical, has been a positive experience so far, she says. She’s learned about how different organizations work and what it takes to mobilize communities, as well as how denominations differ in their approaches to indigenous-settler relations.

Heinrichs says that he appreciates working with Froese.

“[She is] someone who cares about matters of peace and justice and doing right . . . so there’s a solidity about her,” Heinrichs says, adding that he feels honoured that she has chosen to engage with the pilgrimage in the way that she has. “She’s doing this for independent study, but it’s more than that. I know [she’s doing it] because she cares deeply about these things. She’s putting a lot of time into this.”

The goal of the pilgrimage is to engage churches in conversation about UNDRIP, explore why it matters, the hope it offers and how Christians can respond. Local communities are invited to attend conversation circles en route.

“I hope the pilgrimage will stir the church to work on this relationship with indigenous peoples, which has so much brokenness,” Froese says. “We have to work on the slow process of healing these wounds that run really deep within this country, within this land.”