Mennonites and the meaning of food 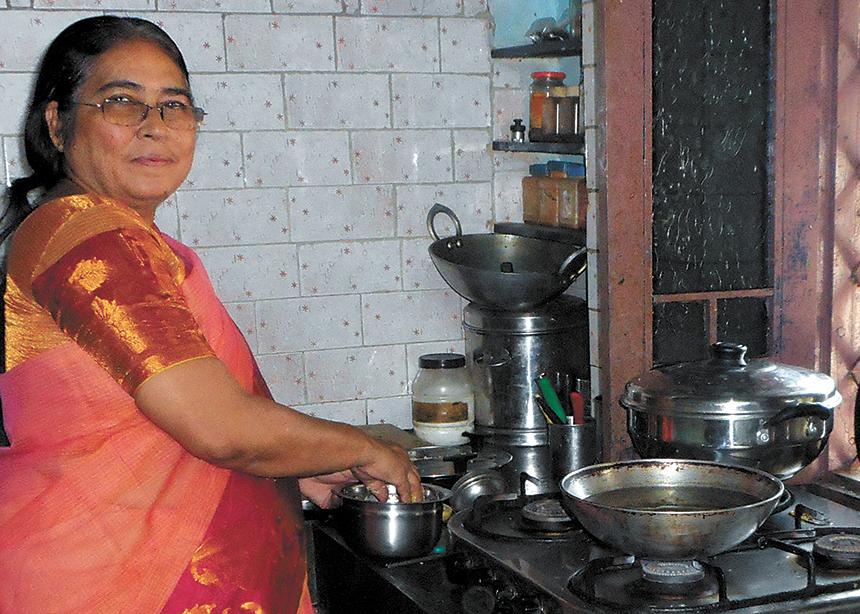 I recently learned to eat anarsa—a sweet, rice-based treat—while travelling in India visiting with Mennonite women, and learning about their religious lives and food practices. It was late February, but I was told that Christians in India normally prepare anarsa at Christmastime as a seasonal and festive treat.

I couldn’t help but reflect on the similarities between this Indian specialty and peppernuts, one of my own culture-based Christmas foods. I concluded that the ingredients, preparation and taste of the particular foods that I—a Canadian Mennonite woman—and my Indian Mennonite counterparts eat are quite different, as are many aspects of our cultures, but that the purpose and meaning surrounding such foods actually hold much in common.

In our human yearning to express our spirituality in everyday practices, and vice versa—to sanctify our daily tasks—we have managed to connect certain moments in the Christian year with the customs and practices of our cultural foodways. These subtexts in the Christian message have, I think, given women a sense of presiding over the sacred, especially in the past, when their ecclesial roles were limited.

During the Christmas season, my mother has always made peppernuts, a traditional northern European cookie that is small and spicy, either hard or soft. My grandmother made them too. One of my male colleagues bakes them in mammoth batches, and as a seasonal workplace custom they are eagerly anticipated by all of us: Anabaptist, neo-Anabaptist and non-Anabaptist alike.

These Christmastime peppernuts carry no explicit religious meaning nor is their consumption required of a practising Mennonite, but they do link me to the cultural and also religious past of my grandparents in Ukraine.

When Mennonite refugees, mostly women and children, fled their homes in the Soviet Union in the midst of the Second World War and found temporary safety in Berlin, they were fearful and hungry. However, Mennonite Central Committee workers were able to arrange for ingredients and the use of an oven so that women could prepare more than a thousand little sacks of peppernuts for the gathered refugees on Christmas Eve. It was a sign of hope in the midst of despair, a sign that God had not abandoned them.

In addition to experiencing a wide array of delightful dishes and warm hospitality during my brief tour of Mennonite communities in India, I discovered that anarsa, like peppernuts, is made for special festive times of the year, especially Christmas. I first learned about anarsa from a group of women in the Bihar Mennonite Mandli in Jharkhand state.

Lily Kachhap described the time-consuming process of making anarsa that begins with several days of soaking raw rice, then drying and grinding the rice finely to powder; then it is mixed with sugar or jaggery (unrefined cane sugar), and optional ingredients like coconut, nuts or dried fruit. The mixture is formed into flat or round shapes and then fried in oil.

I learned quickly that, as with peppernuts, there are many variations according to the style and preferences of the cook. In fact, the debates I witnessed about preparing anarsa were as animated as the discussions about the “authentic” way to make peppernuts at my Mennonite workplace, if not more so.

One woman declared that every Christian home would have anarsa at Christmas, while another said that when Mennonite women began making it in the weeks of Advent, their non-Christian neighbours began to come around hoping for a taste. These Indian Mennonite women came to associate their anarsa-making with a religious season, just as I did with my peppernuts.

While peppernuts and anarsa are different in their cultural origins, taste and ingredients, they are very similar in meaning for Mennonite women of different ethnicities.

For faith groups that are tied to particular cultural traditions, whether contemporary or ancestral, food holds extra meaning as a material and spiritual entity that ties us to our religious beliefs and our cultural identity. The preparation of both peppernuts and anarsa carries this purpose and conveys love—for God, for the birth of Jesus, for the labour of his mother Mary, and for the people with whom we share these Christmas treats.

It may not have been a coincidence that shortly after I first learned about anarsa, while travelling the jam-packed roads of Jharkhand, I saw a large truck with this slogan in large letters on the back: “Cook food. Serve love.” It looked pretty Anabaptist-Mennonite to me.

Marlene Epp is professor of history and peace and conflict studies at Conrad Grebel University College at the University of Waterloo, Ont. A longer version of the article was originally published in the November 2015 issue of Anabaptist Witness.

For more on food, see:
Gifts of the table
An empty bowl
Mennonites connect over pancakes
Food Cupboard provides emergency help in Wellesley 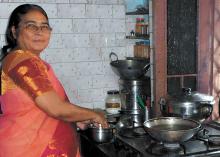 A plate of anarsa. (Photo by Marlene Epp) 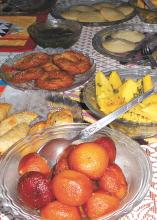 Neeta Epp prepared various dishes, including anarsa for Marlene Epp, who visited India to interview Mennonite women there about their food practices. (Photo by Marlene Epp)