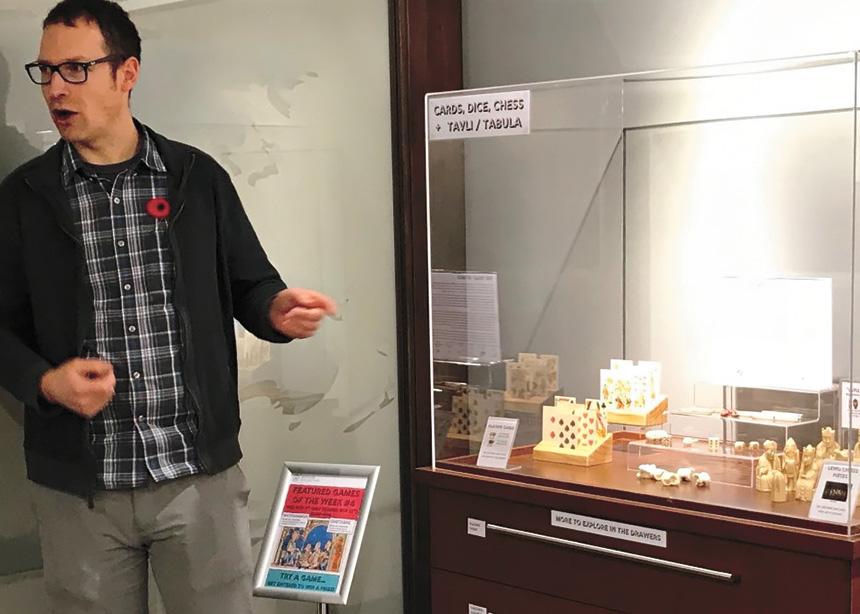 Greg Thiessen, manager of the Metzger Collection at Columbia Bible College, discusses the origins of dice, chess and other ancient games at the museum’s current display of ‘Let’s Play!’ The exhibit invites visitors to explore the origins of table games and their place in cultures throughout history. (Photo by Amy Rinner Waddell)

The commonality of playing games throughout history, and how and why civilizations have played those games, are the foci of the current featured exhibit, “Let’s Play!” at Columbia Bible College’s Metzger Collection museum.

“The exhibit seeks not only to highlight a consistency in humanity across history in the commonality of playing board games, but to understand the unique cultures and societies that have birthed the different games that have been played, and in turn, to understand why, in our day and age, we play the games we do,” says a statement from the museum.

Games have been played for thousands of years by people from all cultures, says Greg Thiessen, the Metzger Collection museum’s manager, adding that, “board games touch on what it means to be human. There’s something about playing tried and true games that never gets old.”

Thiessen notes that games have experienced a resurgence recently and, despite the popularity of video and electronic games, people still find face-to-face interaction around a table to be enjoyable and community-building. Columbia students have been gathering regularly to play weekly featured games in the museum.

“Let’s Play!” highlights popular and familiar games such as Monopoly and chess along with some obscure and unfamiliar ones. Games fall into different categories, including racing games, games of strategy, games of skill, and war games. Some of the oldest games on display include Senet, dating back to ancient Egypt from 1390 B.C., and the Royal Game of Ur dating back to 2500 B.C. Mesopotamia.

Visitors can learn interesting facts about the origins of games and their adaptation to other cutures, and about religious and historical oppositions to games such as Tarot cards, Dungeons and Dragons, playing cards, and games involving gambling elements. A discussion guide invites visitors to reflect on the types of games they play and whether some games tend to be either constructive or harmful.

The exhibit is interactive: visitors are encouraged to try their hand at the games on display.

“Let’s Play!” will be at the Metzger Collection museum until Feb. 17, 2023. See metzgercollection.org.

Do you have a story idea about Mennonites in B.C.? Sent it to Amy Rinner Waddell at bc@canadianmennonite.org. 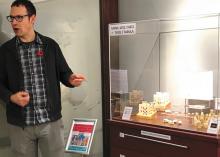 Greg Thiessen, manager of the Metzger Collection at Columbia Bible College, discusses the origins of dice, chess and other ancient games at the museum’s current display of ‘Let’s Play!’ The exhibit invites visitors to explore the origins of table games and their place in cultures throughout history. (Photo by Amy Rinner Waddell)