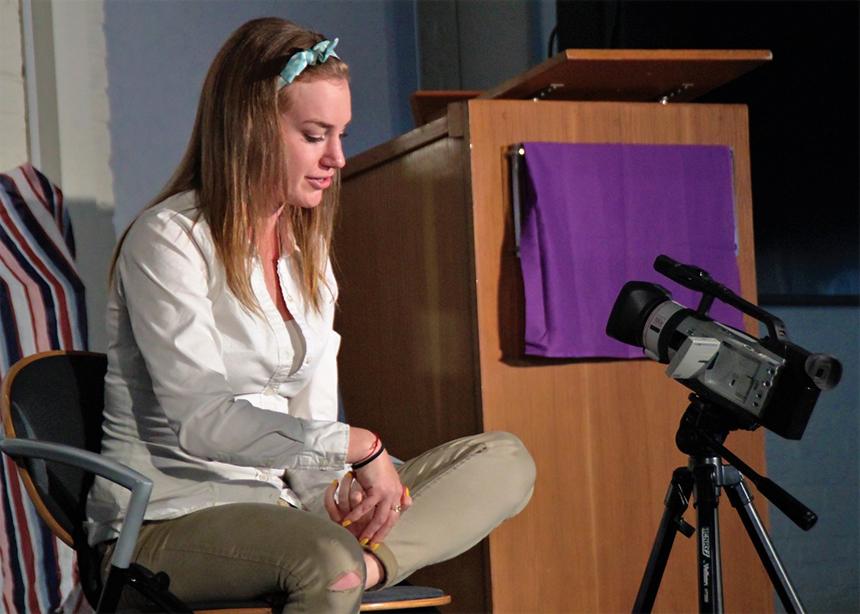 The second annual Global Mennonite Peacebuilding Conference and Festival took place in Elspeet, the Netherlands, between June 27 and 30. It brought people together with the aim of reflecting on Mennonite peacebuilding accomplishments, failures, opportunities and challenges in various settings.

A number of Canadian Mennonite young adults took part in the conference, including Silvie Kroeker, 27, who is a member of Fort Garry Mennonite Fellowship in Winnipeg but currently lives in Germany and works at Friedenshaus (Peace House).

Together with her father, Gordon Zerbe, a professor of New Testament at Canadian Mennonite University, they spoke on how hospitality to foreign migrants presents one of the crucial challenges for peacebuilding in the world today.

Friedenshaus was started in 2016 as a joint venture between Mennonite Church Canada International Witness workers, the Mennonite church in Ludwigshafen and the regional Mennonite conference, Kroeker explained. She is currently the coordinator there.

“At this time [2016] there were many refugees, especially from Syria, looking for places to learn the German language,” she said at the conference. “Since then, the Friedenshaus has offered informal German classes, as well as community events, as a way to bring people of different cultures together and to foster peace in the community. Language and discrimination are still huge barriers for all kinds of migrants who come to Germany.”

Her experience at Friedenshaus contributed a great deal to her theology of hospitality as peacebuilding. “I think the church and Christians have a responsibility to be hospitable and work for peace, just like Jesus did,” she said. “Jesus welcomed all kinds of people; therefore, we should not be discriminatory in our hospitality.”

She hopes to continue learning from the people she works with at Friedenshaus, in order to practise radical hospitality daily. “I hope to take everything that I have learned in the last year and really work on making the Friedenshaus a place where people want to be, and that has an impact on the community,” she said. “I met a lot of people at the conference, and networking is an important aspect of my work, so I hope that I can use and grow my connections with people doing similar work in Europe and around the world.”

Kroeker and Zerbe weren’t the only Canadian Mennonites who spoke at the conference.

Ontario’s Theatre of the Beat performed their acclaimed play, #ChurchToo, which includes seven vignettes showing the traumatic experiences of assault and abuse within church communities.

From the secret relationship between a woman and her pastor, and discriminatory church policies, to coming forward with allegations of impropriety by people in power, the play looks at the dynamics of power and sexual abuse in what is supposed to be a safe place.

Artistic director Johnny Wideman, 32, said the play was an exercise in holding a door open to talk about an issue that causes division in the Mennonite church. He noted that conflict is sometimes avoided, as it’s seen as breaking the peace.

“Hurts need healing, and sometimes conflict is the only way to bring about a truly restorative justice,” he said. “Right now, that conflict is acknowledging that abuse has been allowed and sometimes permitted to exist within our church communities, communities where we were told we could be safe and trust each other.”

Wideman said the play was well received by its audience, which was striking.

“It's powerful, and somewhat disheartening, to know that the themes of gender and power and abuse ring true across the globe,” he said.

“Many shared their own stories of abuse with us, and expressed sincere gratitude for the difficult and often emotionally draining work of putting on such a play. We hope to return to Europe, and hopefully abroad, in order to continue sharing #ChurchToo with anyone who will host it.” 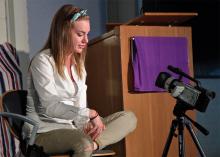 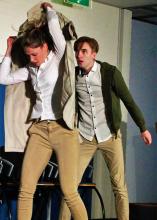 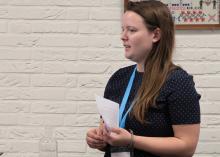 Silvie Kroeker speaks at the Global Mennonite Peacebuilding Conference in the Netherlands with her father, Gordon Zerbe. (Photo courtesy of Silvie Kroeker)