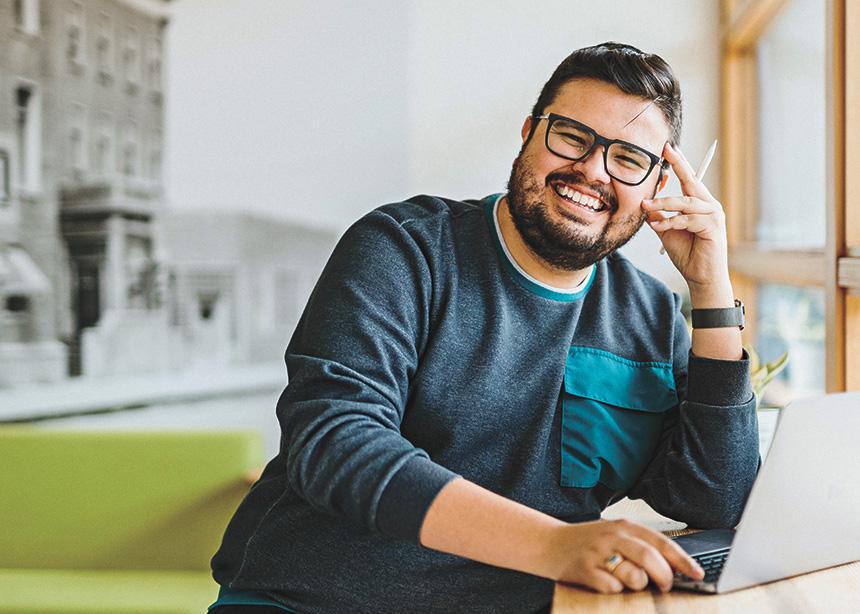 For Ben Borne, his work is not only professional, it’s also deeply personal, as he is both Saulteaux from Yellow Quill First Nation and Mennonite. (Photo courtesy of Ben Borne)

Borne works for Mennonite Central Committee (MCC) Saskatchewan, teaches at First Nations University of Canada, and is the co-president/co-founder of Symmetry Public Relations.

His fourth job is a new addition to his portfolio. Early in 2022, he became the publisher of Eagle Feather News, a Saskatchewan-based Indigenous newspaper. The newspaper recently celebrated 25 years and has a readership of 40,000 people across Canada.

“Eagle Feather is a publication that has a focus on telling the non-sensationalized stories from Indigenous communities,” Borne says. “We share positive, important, true stories and profiles of Indigenous people; the sort of stories often aren’t shared in mainstream media. We really try to capture the essence and nuance of these communities rather than portray groups of Indigenous people as a monolith.”

For Borne, his career in communications work is part of a larger calling to share stories and work towards justice.

“I was always interested in storytelling and connecting with people,” he says. “I would shoot and edit videos as a kid, and I did a semester in a media program in high school. When I went to Canadian Mennonite University, I was on a pastoral path, so I majored in biblical and theological studies and minored in communications and media, and there’s really a storytelling element to both. I really owe my path to this weird mix of my interest and my upbringing. And my faith informs my work in my ethical practice, beliefs and my guiding principles. The communication profession is so relationally oriented.”

In his consulting work with Symmetry Public Relations, Borne is often hired to help businesses and organizations in the work of Indigenous-settler reconciliation, such as anti-racism work.

“As a consultant, I can say things that others can’t,” he says. “Outside consultants can poke at things. Businesses know that we’re not here to be kind, but to walk through the process of understanding. Often this means looking at their practices and how to create anti-racist work policies, practices and procedures.”

For Borne, this work is not only professional, it’s also deeply personal, as he is both Saulteaux from Yellow Quill First Nation and Mennonite.

“My Mennonite identity gets challenged by new ideas and worldviews all the time,” he says. “Mennonites have a long history of being involved with the foster-care systems and with AIM (Adopt Indian Metis).

“I’m a direct product of the 60s Scoop. My mom was adopted by a white family. I’ve been wrestling down that history. Hearing all the stories from both sides, Indigenous and Mennonite, helped me realize how I became ‘white-ish.’ I needed that bigger historical context to understand my place and how that fits into the bigger picture. It all comes down to knowing your story. To do the good work of reconciliation, you have to know where you come from. People need to know and tell their stories.”

Borne says his experiences also offer a challenge to the broader Mennonite church: “Mennonites have a reputation as being an insular community. And there is a lot of good work that is being done through MCC and in Indigenous-settler relations and in some churches too. But we haven’t really explored this path of anti-racist work, how churches and people still support racist policies and systems.

“We’re still participating in systems that do not redistribute power. Still quiet on this front, and we have to be actively anti-racists. We have to be willing to speak out against it. Because if people aren’t fully invited to the communion table, and there’s still disparity, then there is not an equal experience of the bread. Communion is supposed to be equal.

“There’s more work to be done,” he continues, “and some people do it really well. We all live with the best of intentions and none of us are ever going to be perfect. But we have to be willing to wrestle, because we can’t always foresee the consequences or challenges.” 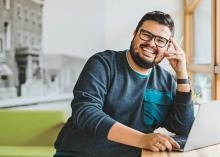 For Ben Borne, his work is not only professional, it’s also deeply personal, as he is both Saulteaux from Yellow Quill First Nation and Mennonite. (Photo courtesy of Ben Borne)