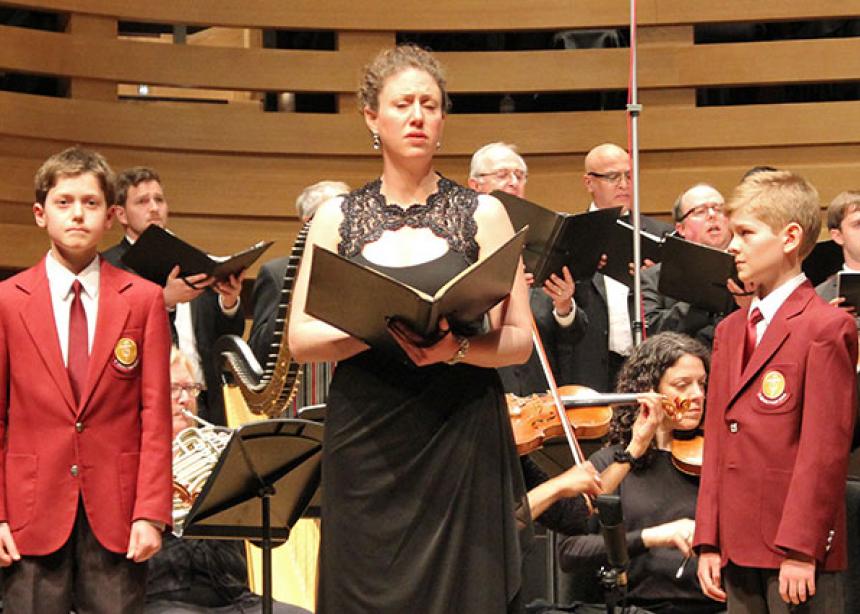 The apocryphal book of Judith contains the story of a righteous Jewish widow who saves her people from the ravages of the Assyrian/Babylonian army led by Holofernes. While her city is besieged she leaves with her maid and is welcomed into the general’s tent. He thinks he will seduce her, but when he is alone with her and drunk from partying, she beheads him. In the morning the Assyrian troops fall into disarray and are routed by the Jews.

The book itself has problems as the army is Assyrian but the emperor is Nebuchadnezzar, a Babylonian. The exact time of the story is also muddled. Jews do not include the book as scripture, nor do most Protestant groups, but it is included in the deuterocanonical books of the Catholic Bible.

In the late 1800s, C. Hubert Parry was asked to prepare an oratorio for the Birmingham (UK) choral festival. Not a religious man himself, he made several suggestions on the subject matter before he and the committee agreed on Judith. After several successful performances in the late 1880s the piece fell into disuse and has not been performed for years.

Fast forward to the early 2010s when a member of the Pax Christi Chorale who collects choral memorabilia handed artistic director Stephanie Martin a leather-bound gilt-edged copy of the work. She was amazed, never having seen the piece before. Six months later she began preparing to present it.

Soloists were invited but then problems began. Novvello, the publishing house which owned the rights to Judith in North America, was loath to make the score and orchestral parts available. Then began a larger project of creating a digital version as two of Martin’s grad students converted over 400 pages.

All this came together on May 3 in the Royal Conservatory of Music’s Koerner Hall, with a Parry scholar from Durham University (UK) in attendance. Jeremy Dibble, who has been studying and writing about Parry since 1980, had never seen Judith performed. He gave a half-hour lecture about Parry and Judith before the performance.

And a glorious performance it was. Almost operatic in the drama of the story and the emotion of the four soloists, the sell-out crowd was treated to the “Toronto Mennonite choir” telling the morally ambiguous story of Judith.

Parry set the story during the time of Manasseh, a Jewish king who led his people to worship the gods of the people around them. In a powerful solo Meshullemeth the queen retells the story of the Jews’ redemption from Egypt to her four sons. Soloist Jillian Yemen (mezzo-soprano) sang to four young singers from the St. Michael’s Choir School playing the king’s sons. Their trust in their father, who had just agreed to sacrifice them, tugged at the audience`s heart strings. The sacrifice is thwarted by an Assyrian attack at the end of the first act.

As the second act opens, Manasseh, sung by tenor David Menzies, is repentant. As Manasseh and the people return to Jehovah, the Assyrians read this as rebellion and besiege Jerusalem again.

Shannon Mercer, soprano, having changed from her dark “widow’s gown” of the first act to a brightly coloured gown, emboldens the Jews not to listen to the Assyrian messenger (sung by baritone Michael York) who is disdainful of Jehovah and Manasseh. The seduction and murder happen off-stage, but Judith returns, entreating the Jews to hang Holofernes’ head from the battlements and to prepare to rout the Assyrians. A long chorus of praise to Jehovah is almost anti-climactic at the end. In spite of that the Toronto crowd gave an enthusiastic ovation, calling Martin and the soloists back three times.

So why did the “Toronto Mennonite Choir” present a non-biblical oratorio which glorifies seduction and murder? Martin notes that the story poses powerful questions about the death of one to save many. She believes that artists have the role of framing difficult questions and do not necessarily answer those for the audience. The Bible, she notes, is full of “bad-ass people” and poses more questions than it answers.

Judith’s story also ranks among the few female heroines in the Biblical-historical record, along with Jael and Deborah, who save their people. The story also encourages the listeners to think about what they are doing in the present which will effect their children and future generations.

This performance was videotaped and recorded with the hope of creating DVD and CD versions in the future. Fundraising is underway to support this project.

Thanks for the thoughtful coverage of this momentous undertaking and achievement by Pax Christi Chorale. As a choir member this has been a wonderful undertaking; being a part of bringing to life a work never performed in North America and not performed anywhere in at least 50 years! Our artistic plan is to present works that are forgotten or ignored yet are firmly rooted in the traditions of classical choral singing. That can be a risky undertaking, but is so worthwhile as presenting Judith proved to be. Pax Christi Chorale's foundation is firmly rooted in the Mennonite community of the GTA, and although the majority of our 100 voice choir are of other faith traditions, many of us wrestled with the theological challenges this powerful work presented. Life continues to challenge us with difficult moral choices today, as it did then.
The oratorio has had a powerful impact on those of us who sang it and those who heard it.
Emily F Burgetz, Co-founder, Choir President and Past Chair (1994-2015) Pax Christi Chorale