There are songs about God, angels, creation, pilgrimage, prayer and the afterlife, reports Religion News Service. 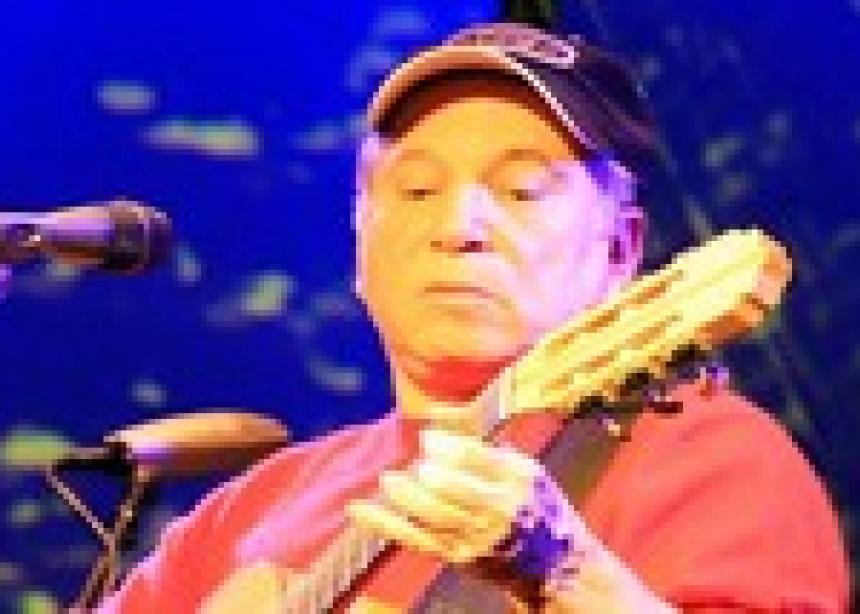 Paul Simon: 'Always a spiritual dimension to his work.'

In a career that has spanned half a century, American musician Paul Simon says there's always been a spiritual dimension to his work. But the overt religious references in his most recent album, "So Beautiful or So What," surprised even him. There are songs about God, angels, creation, pilgrimage, prayer and the afterlife, reports Religion News Service.

Simon says the religious themes were not intentional -- he does not describe himself as religious. But in an interview with the U.S. Public Broadcasting Service program "Religion and Ethics NewsWeekly," he said the spiritual realm fascinates him.

"I think it's a part of my thoughts on a fairly regular basis," he said. "I think of it more as spiritual feeling. It's something that I recognize in myself and that I enjoy, and I don't quite understand it."

Simon may not understand it, but he's been writing and singing a lot about it, and that has generated attention. One Irish blogger suggested "So Beautiful or So What" could be the best Christian album of 2011. Cathleen Falsani, an evangelical who writes frequently about religion and pop culture, called it "one of the most memorable collections of spiritual musical musings" in recent memory.

Simon has received numerous awards, including 12 Grammys. His first Grammy came in 1968 for best contemporary vocal duo, along with his musical partner Art Garfunkel. Their 1970 Grammy-winning song "Bridge Over Troubled Water" was influenced by gospel music. Simon has explored world music in the latter half of his career; his 1986 album "Graceland," featuring South African music, reached number-one on sales charts in the U.K., Canada, New Zealand and Australia.

Simon comes from a Jewish background and grew up in the New York city borough of Queens. "I was raised to a degree enough to be bar mitzvahed and have that much Jewish education, although I had no interest. None," he said. Now at 70, he said he has many questions about God. In his song, "The Afterlife," he speculates about what happens after death. He imagines waiting in line, like at the Department of Motor Vehicles.

As the chorus goes: "You got to fill out a form first and then you wait in the line."

But there's a serious aspect as well, as the song continues: "Face-to-face in the vastness of space/ Your words disappear/And you feel like you're swimming in an ocean of love/ And the current is strong."

"By the time you get up to speak to God, and you actually get there, there's no question that you could possibly have that could have any relevance," Simon explained.

One of the most unusual songs on the album, "Getting Ready for Christmas Day," includes excerpts of a sermon preached in 1941 by prominent African-American pastor J.M. Gates. Simon heard the sermon on a set of old recordings and said he was drawn to the rhythms of Gates' "call and response" style of preaching.

The song "Love and Hard Times" begins with the line: "God and His only son paid a courtesy call on Earth one Sunday morning."

According to Simon, "To begin with a sentence that is the foundation of Christianity, I said: This is going to be interesting. Now what am I going to say about a subject that I certainly didn't study?" The song ends with a love story, which he says is really about his wife, and a repetition of the line, "Thank God I found you."

"When you're looking to be thankful at the highest level, you need a specific and that specific is God. And that's what that song is about," he said.

Simon said the beauty of life and of the earth often leads him to thoughts about God. "How was all of this created? If the answer to that question is God created everything, there was a creator, than I say, Great! What a great job," he said.

But he said he won't be troubled if it turns out there is no God. "Oh fine, so there's another answer. I don't know the answer," he said. Either way, he added, "I'm just a speck of dust here for a nanosecond, and I'm very grateful."

Simon has sought input on his questions from some religious leaders, including the Dalai Lama. He once spent hours talking with British evangelical theologian John Stott, who died last year. Simon said Stott made a big impression on him. "I left there feeling that I had a greater understanding of where belief comes from when it doesn't have an agenda," he said.

Many of Simon's songs raise universal questions about things like destiny and the meaning of life. "Quite often, people read or hear things in my songs that I think are more true than what I wrote," he said.

Falsani calls Simon a "God-chronicler by accident." She said, "he looks at the world and kind of wonders what the heck is going on, like many of us do. He asks good questions and seems to have his finger on the heartbeat spiritually of a culture."

Simon said he's gratified -- and somewhat mystified -- that some people have told him they believe God has spoken to them through his music. "Is it a profound truth? I don't know," he said. "I feel I'm like a vessel, and it passed through me, and I was the editor, and I'm glad."

Paul Simon: 'Always a spiritual dimension to his work.'