On the path to wellness 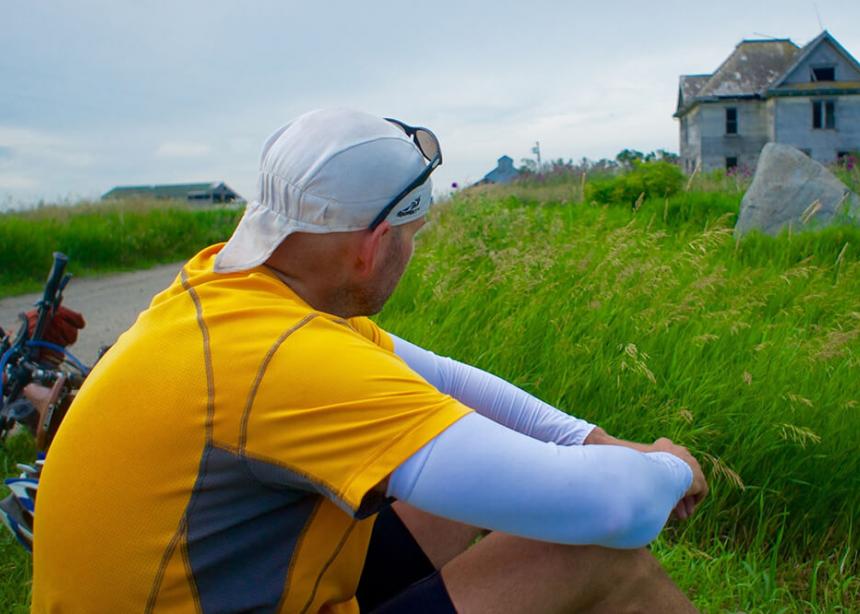 Popular wisdom suggests the way to deal with mental health issues is to talk them through. Pete McAdams, an uncomplicated, 43-year-old, Hutterite long-distance cyclist, has discovered a quieter path.

While he prefers to focus on biking rather than himself, his decidedly atypical Hutterite last name begs explanation. Having grown up on the “fringes” of a Bruderhof community in Pennsylvania—a group associated with Hutterites—McAdams’ parents went to Crystal Spring Hutterite Colony near Niverville, Man., to assist with translation work after McAdams had left home. When he visited his parents, he liked what he saw of colony life. His parents ended up staying at Crystal Spring and, in 1995, he joined the colony, too. It is no utopia, nor an attempt at utopia, he says, but it is “the best lifestyle I have seen for living out the commands of Jesus.”

McAdams emphasizes the non-rigid nature of the community. I ask how he would respond to the stereotype that would suggest otherwise? “Look at what I do,” he says with a chuckle, sitting at a picnic table in my yard with his cycling gear on.

What he does is ride bike. About 300 kilometres a week. Maybe half that in winter. In good Hutterite fashion, he makes his own recumbent bikes.

“I’m not an athlete,” he tells me. This is not false humility; it is part of his message. Although he pedals a lot of kilometres, he is not particularly fast. He has never won a race. “I’m not competitive,” he says. And until five years ago, he says he was “significantly overweight.” Nothing he says sounds like an athlete’s words.

The story keeps coming back to the bike as a means of healing. As a teenager, McAdams’ temperament—more specifically, his temper—ruled out team sports. He also struggled with depression. Biking helped.

"I always sort of knew that a good ride cleared my head," he says. “If I spent time on the bike, [the anger and depression] went away.” He did see counsellors a couple times, and while he does not discount the value of therapists for some people, he says "they weren't of much help" in his case.

Biking was. And it continues to be. What exactly is it about biking that helps? “It's not going to heal everything,” he says, “but there's a power that is healing in riding.”

The bike is also a great way to connect with others. James Friesen was riding the highways of southern Manitoba in 2002 when he saw a “mirage.” A guy was riding a recumbent bike down the highway, Friesen recalls, with a bunch of kids behind him. Dresses fluttered in the wind and the closest thing to spandex were suspenders.

It was McAdams on a charity ride with other Hutterites. The meeting was particularly fortuitous, as Friesen is the head of Eden Health Care Services, a Mennonite-based mental health organization in southern Manitoba. The two men continued to bump into each other at biking events over the years. Now, Crystal Spring Colony is a big part of Eden's annual “Head for the Hills” cycling fundraiser. Last September, Jonathan Kleinsasser, a colony member in his 70s, was the top fundraiser.

This year, McAdams is taking the connection between biking and mental health a step further. In conjunction with the attempt by Arvid Loewen, an ultra-long distance cyclist, to break the Guinness Record for biking across Canada, McAdams plans a parallel ride—Guinness rules require Loewen to bike alone—from Regina to Winnipeg, 583 kilometres, a distance he hopes to cover in 24 hours. He says Loewen put out the challenge and he accepted it. McAdams hopes to arrive in Winnipeg on the evening of July 6, 2016, for a joint rally with Loewen at the Manitoba legislature. Friesen and others plan to ride into the city with him.

McAdams’ goal is simple: Share the message that biking can bring wellness and to bring attention to the good work of Eden Health Care Services. Both McAdams and Friesen see value in formal, as well as informal, approaches to mental wellness. Friesen says research shows that often it is in the unstructured downtime of our lives—time in the bush, splitting wood, riding a bike—that our brains make the connections essential for well-being.

That is certainly true for McAdams. “I found something on the bike,” he says, “and I want to share it.” For those who can’t bike, he suggests finding a similar activity. His dad, in his late 70s, walks. McAdams’ story is not about athletic heroics or even an ordinary person doing extraordinary things. It is about ordinary people doing ordinary things on the path to wellness.

Follow McAdams's progress between Regina and Winnipeg on July 5 and 6, or for a recap, see his Facebook page.