Pastors meet for coffee and books 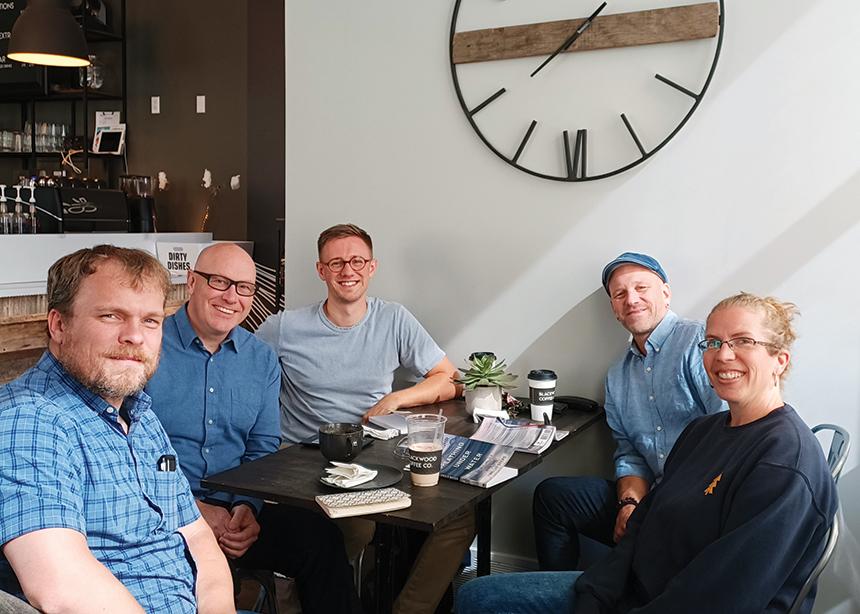 “We marked up our books like crazy with the things we wanted to talk about,” says Tany Warkentin, pastoral leader at Springridge Mennonite Church in Pincher Creek.

The group began when two pastors wanted to take their love of books and learning beyond a few informal words over coffee on the sidelines of formal events, and into their own intentional space. Mennonite Church Alberta’s newly hired church engagement minister, Steven Giugovaz, fanned the flame by encouraging pastors to build relationships between congregations and between pastors.

“I think the motivation was, in part, that some of us are externally motivated to get helpful and nourishing reading done,” says Kowalko. “I personally had a growing stack of books that I really wanted to get to but found it hard to motivate myself. Getting a group together motivated me to read, while also connecting us better together in our lives and ministries.”

Every month, the five alternate between Nanton and Claresholm coffee shops to make the trip shorter for those coming from surrounding areas. The approximately one-hour drive for most doesn’t seem to deter the group from meeting.

“We do click really well,” says Warkentin. “I’ve never been in a book club and I have never been drawn to a book club, so the fact that I really look forward to this is telling.”

They have been meeting monthly since the beginning of the year, and were adamant about it being an in-person gathering and a small, intimate group for the coffee-shop setting. They take turns choosing the books, which can be faith-based or chosen for personal interest reasons. They then order lunch, coffee or snacks and have informal conversations around the book.

“Some people have audio books, some have e-readers and some come with a very marked-up book,” says Warkentin. “We underline things that struck us, bring them to the group, and the conversation just goes.”

The group started with The Baby and the Bathwater by Robert J. Suderman, which was conveniently sent to churches as a resource. Then followed Healing Our Broken Humanity: Practices for Revitalizing the Church and Renewing the World by Grace Ji-Sun Kim. Fight Like Jesus: How Jesus Waged Peace Throughout Holy Week by Jason Porterfield was then chosen as the third book.

On her turn, Warkentin suggested Breathing Under Water: Spirituality and the Twelve Steps by Richard Rohr.

“I chose from books that I have at home and have been wanting to read. This one sounded very interesting to me,” she says. “It turned out to be a pretty powerful book for all of us.”

The book is based on the Twelve Steps of Alcoholics Anonymous, and the author makes connections with how well they align with the gospel, and how powerful and Christlike the steps are.

“I really find Richard Rohr’s writing directed right at me, his ways of thinking really hit me,” Warkentin says. “We all have addictive tendencies in the way we think, the patterns we follow, even though we know they aren’t healthy patterns, in the way we respond, and they are all addictions if you think about it.”

The variety of books also offer education in areas of large-scale peace responses and inner workings that are relevant to everyday life and work. The pastors use the group to sharpen their critical thinking skills and offer five different perspectives, even though they may have similar thinking in many ways.

“You think about things deeper, and it’s good to get different perspectives,” she says. “We ask questions like: ‘What do you actually think about that?’ ‘Where do we get that from?’ Let’s go a little deeper.”

“The conversation is still very engaging even if it doesn’t always directly talk about the book, adding in our own experiences, thoughts and interests,” she says.

“The value of the group is getting to know one another, and feeling safe to share about ministry and life,” adds Christieson.

Meeting in the early afternoon, the group says that Blackwood Coffee Co. in Claresholm is a favourite spot, both for its famous squares, but also because the owner, a local pastor, is very welcoming to the group.

“Just knowing that they are fine with us taking a large table for several hours, even over lunch, is reassuring,” says Warkentin. “He told us that we are very welcome there.”

The group shows no signs of petering out, with many more books to read and many more conversations to learn and grow from.

Do you have a story idea about Mennonites in Alberta? Sent it to ab@canadianmennonite.org. 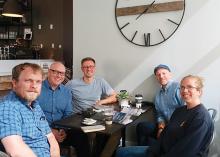