‘He asked if it was OK for him to die. He wanted our support and blessing’ 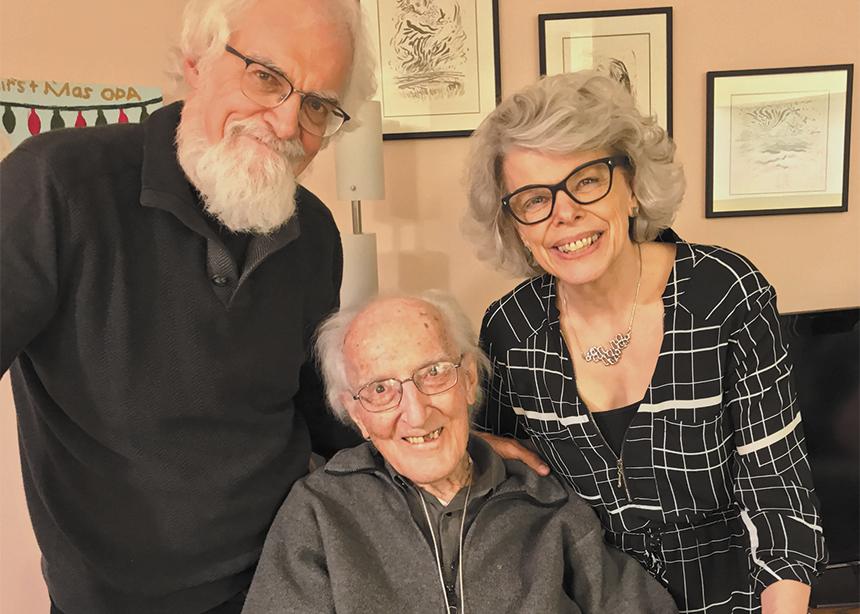 Rennie Regehr and his wife Jenny are pictured with Rennie’s father, John. (Photo courtesy of the Regehr family)

Before his death in November 2019, John Regehr of Winnipeg said he wanted to start a discussion about death and dying.

“When we asked if he wanted us to share this, he said yes,” said his daughter Jenny Cartman.

“I saw his decision as the professor giving his last teaching, or the pastor preaching his last sermon,” added his son Mark.

“He was ready to go,” said his son Rennie. “He had lived a full life. He knew it was time.”

According to his children, Regehr’s last few years had been difficult. His wife Mary died in 2014. At the age of 90 he needed life-saving heart surgery.

The surgery went well, but a few months later he fell and broke his hip. He recovered, continuing to live independently. But over the next few years there were more falls and more trips to emergency.

On Oct. 18, 2019, he was admitted to hospital with severe pain in his hip. This time it was clear he would never be able to go home again.

“He was exhausted,” Rennie said. “He had no more projects and didn’t want to stay alive for the only purpose of remaining alive. He didn’t want to lie in bed for who knows how long, waiting for death to come.”

Two weeks later, Regehr called his children together for a conversation about death.

“He asked us if it was okay for him to die,” Rennie said. “He wanted our support and blessing.”

Mark admitted he was taken aback at first. “I was caught off guard when he suggested it,” he said. “But I quickly saw his point of view.”

While finding it hard to hear his request, daughter Jenny was not surprised; her dad had spoken many times about being ready to die. “He had made his mind up,” she said.

Regehr asked medical staff at Concordia Hospital, a publicly funded facility owned and operated by Winnipeg’s Mennonite community, about ways to hasten his dying. They suggested he stop eating, an option that didn’t appeal to him.

Then he learned he was eligible for MAID since he couldn’t return to normal life, had an incurable disability, his life was unbearable and there was no hope of reversal.

“His face lit up,” Rennie said, remembering his reaction upon hearing he qualified and could be certified for MAID by a doctor.

While the news put Regehr at ease, his children worried that his decision might cast a pall over their dad’s life of service to the church. But when they saw how convinced he was, they offered their full support.

Since Concordia Hospital doesn’t permit MAID on its premises, on Nov. 7 Regehr was taken by ambulance to another city hospital, where he was joined by his family and two pastor friends.

Before he died, Scripture was read, and he was asked: “John, can anything separate you from the love of Christ?”

He shook his head emphatically and, with a strong voice, answered: “No!”

Then, as Rennie played one of his dad’s favourite hymns on the viola, a life-stopping drug was administered intravenously, and Regehr slipped away.

For Rennie, it was a powerful experience.

“To see my dad surrounded by people who loved him deeply, lovingly participating in a compassionate, painless and comfortable death was overwhelming,” he said. “It was wrenching and beautiful all at the same time.”

For those who might question Regehr’s decision on theological grounds—that only God can decide when someone should die—Rennie said his dad had no doubts. “The inner work had been done long before,” he said, noting that his dad had spent a lot of time thinking and praying about it. “He had complete trust in a loving and accepting God.”

Plus, he said his dad “felt he had already played God earlier by deciding to have life-saving heart surgery. He felt death had already come calling for him then, but he had not been willing to go.”

Regehr anticipated some might be critical of his decision based on pro-life grounds. According to the children, he told them that anyone who insisted he should have continued in a “torturous, useless struggle to survive” might not really be pro-life from a caring, compassionate point of view, “but more a slave to that ideology.”

Although the Canadian MB conference is opposed to euthanasia, at least two other members of that denomination have used MAID. Both were members of Lendrum Mennonite Brethren Church in Edmonton, and both used it in 2018.

“I’m grateful to John and his family for the way they encountered and processed this end-of-life circumstance. I’m grateful that we serve a Saviour who welcomes us into his loving presence, in spite of all of my inadequacies and imperfections.”

This article appears in the Dec. 7, 2020 print issue, with the headline, “‘He asked if it was OK for him to die.’” Originally published in Anabaptist World. Reprinted with permission of the author.

Related story:
Can we talk about MAID? 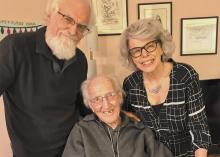 Rennie Regehr and his wife Jenny are pictured with Rennie’s father, John. (Photo courtesy of the Regehr family)

I am not a person of faith but I am a MAiD provider, in BC. Apart from my thanks to John's family (and to John, of course) for sharing the story about his choice to have a medically-assisted death, I would also like to thank Jason Dyck, director of church ministries for the Mennonite Brethren Church of Manitoba for his words. They are worth repeating:

“...I’m grateful that we serve a Saviour who welcomes us into his loving presence, in spite of all of my inadequacies and imperfections.”

Mr Dyck's comments will be far more helpful to the people whom I meet who are interested in MAiD but who are conflicted because of their religious affiliations than are the words of some other religious leaders who offer little in terms of acknowledging the complexity of the decisions to be made at this point in a person's life, and almost nothing in terms of humility regarding their own (or their church's) position regarding this complexity and the possibility that a "one size fits all" approach is correct.

I always enquire about a patient's religious practice - "Do you see yourself as a religious person?" - because I feel it is important that MAiD providers should be alert to the possibility of moral distress in a person seeking MAiD whose religious community teaches that seeking MAiD is sinful. Mr Dyck's acknowledgement of the complexity of the issue and his final reassurance that the Christian god is a god of forgiveness despite adherents' frailties will help me in my discussions with people of faith.