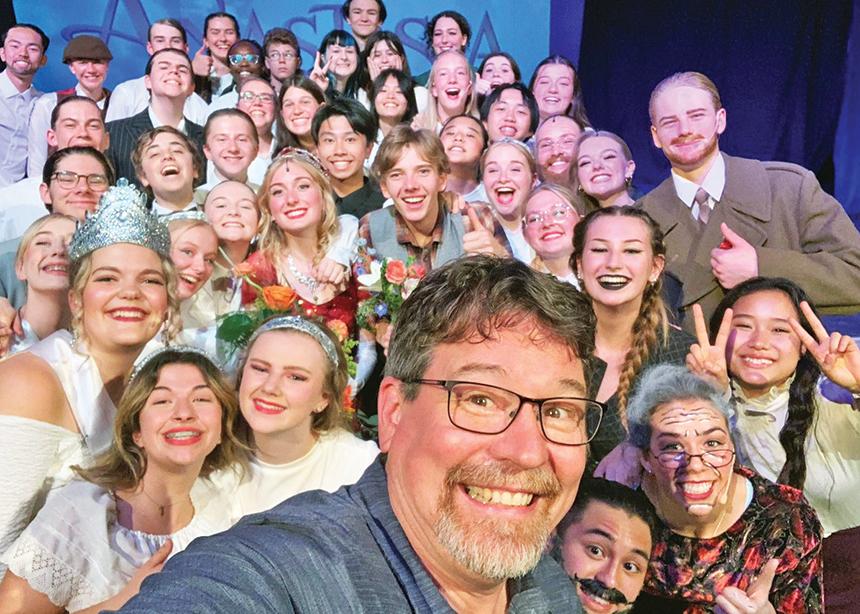 “I remember so fondly the tours and travelling,” says Richard Janzen, the long-time music educator and choir director at RJC High School. “In 2002, we went on a tour along the Oregon coast of the United States. We stopped by the Oregon state legislature building, just to take a peek around. There was this massive common area with a huge dome and great acoustics. And the students just started singing ‘Shenandoah,’ this classic American folk song. Soon, all the activity in that building stopped. People came out of their offices, out of the governor’s office to listen. I remember people just standing and listening in the balcony. It was very surreal and beautiful.”

This is just one of the memorable stories shared by Janzen, who retired from RJC in June, after spending 30 years as the school’s music educator.

Janzen grew up in southern Ontario, later moving to Manitoba to study at Canadian Mennonite Bible College and then at the University of Manitoba, where he studied music and education. After his graduation, he heard about an opening at RJC.

“RJC was very well known for its choral music program, which was my true passion,” he says. “I had other job offers, and we could have stayed in Manitoba, but RJC just seemed to be the right fit. And it was. I spent my entire career there.”

In his tenure at RJC, he observed cultural shifts at the school and in the broader Mennonite culture.

In the early years in the 1990s, about two-thirds of RJC students were coming from Mennonite churches, and they grew up singing in four-part harmony, so those students anchored the choir,” he says. “You didn’t have to teach that kind of singing. In the last few years, only about a third of our students identified as Mennonite. There are a lot of kids with band experience, but not choir. So a lot of my students didn’t have the same internal experience of hearing four-part harmony. They were still keen and excited for that, but they didn’t grow up with it in the same way. What we identify as Mennonite is different from what it used to be.”

While Janzen enjoyed leading many tours, concerts and RJC’s beloved spring musicals, it is the students he will miss the most: “I will miss the contact with the students, watching them grow, seeing them develop both musically and personally.”

Stepping into Janzen’s shoes is Kayleigh Skomorowski, who began at RJC in September. She was the music teacher at St. Mary’s High School in Prince Albert, Sask., for the past 11 years, and recalls seeing Janzen and the RJC Singers perform.

She knew that if the position at RJC ever became available, she would apply. “I want to acknowledge that I’m reaping the benefits of Richard Janzen’s career, which could be intimidating, but he’s been so supportive,” she says. “Richard isn’t a looming shadow. He’s a cheerleader and is really supportive of the work that I am doing. I’m grateful to be standing on the shoulders of a giant.”

Skomorowski’s vision for the future of the program will keep beloved traditions alive while introducing new streams, including a band program.

“I grew up within a band program,” she says. “There are certain elements and gifts that both choral and instrumental music provide to students. Some of the band students have played instruments, and for other’s its totally new. It’s just another opportunity we can offer to the students— the experience of making music without words. We’ll definitely be continuing with the spring musical. I’m looking at other ways for students to get involved, for those who don’t want to be on stage. Every kid in that building has something to contribute to that show.”

She reports that of the almost 100 students enrolled at RJC, 96 are in the concert choir, 54 are in the RJC Singers, and 25 are participating in the band program.

Skomorowski has been enjoying her new role at RJC.

“It’s been really great, you know, the pieces that brought me here, the choir program and the opportunity and appetite to build that band stream,” she says, “And really, all the other pieces that come with working at a Mennonite school: the social-justice emphasis, outside learning, and the whole learning experience. The alternative-learning piece has been very refreshing, which I know is rooted in Mennonite traditions. RJC has the values that I’m looking for in my professional life and my vocation, and I’m enjoying immersing myself in that.” 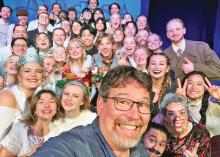