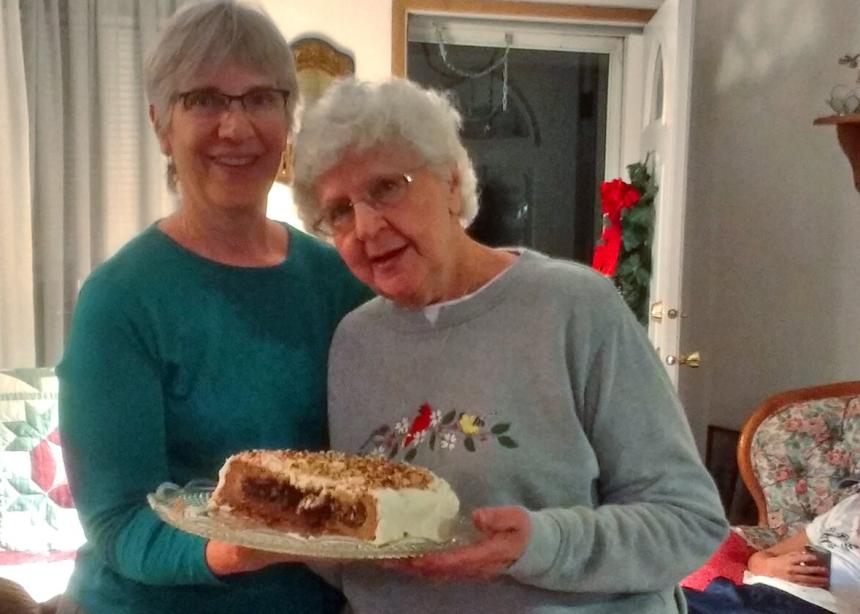 “This isn’t really working out the way I imagined,” I mused, as my mother slept in her chair while I worked on her birthday dessert. I had just ended a phone call with my son, my consultant on the somewhat complicated-to-assemble treat. He was a relative expert, having made two of them compared to my none. I had imagined that my mother, no slouch in the bakery department, would be at my side adding her helpful advice to the process. But a long morning trip to Walmart (her request) had sapped her energy, so she snoozed quietly as I soaked up advice and fortitude from my son.

The dessert is called a “piecaken,” simply meaning a pie baked into a cake. Some months previously, when my son was making one, I had shared the idea with Mother in some of our many phone calls. She loves novelty, and indicated she would like to try a piecaken sometime. Since I was going to Pennsylvania to be with her for her birthday, I offered to make it happen.

Perhaps I made the process even more complicated than it needed to be.

The dessert began in Manitoba, where I made the pastry and chopped pecans. I transported these by plane to my friend in Ontario, who supplied the remaining ingredients for the pecan pie. The finished pie was carried to Pennsylvania by car. Not too difficult so far, right?

In my mother’s kitchen, I prepared the applesauce spice cake batter and placed some of it in a spring-form baking pan. Then I flipped the pie upside down into the cake batter carefully, to prevent the piecrust from breaking apart. Are you still with me? After the pie had been nestled into the centre of the pan, the remaining cake batter was spread around the pie, and then baked until done. When the cake/pie cooled, it was removed from the pan, involving another flip so the hidden pie turned right side up. Finally a thick, delectable layer of cream-cheese icing was applied. Voila! Piecaken.

An hour later, my mother woke up and came into the kitchen, surprised to see that the dessert was nearly complete. She made a valuable contribution, recommending chopped pecans for the garnish rather than whole ones (easier to chew for those with dentures!). At the party the next day, she pronounced the piecaken to be “quite good,” and was happy to have tried it. She added that she prefers her pie and cake to be separate.

The whole experience reminded me of the many birthday cakes Mom made for her many children. Each one was created according to the request of the birthday person, a unique annual event in the blur of a large family, and a tribute to my mother’s phenomenal energy, resourcefulness and love. It is a blessing to share many years with one’s parent, enough that one can reciprocate the kindnesses of the past.

“Honour your mother and your father that your days may be long,” instructs one of the Ten Commandments (Exodus 20:12). Jesus repeated it, and so did Paul, who emphasized its promise: “so that it may be well with you and you may live long on the earth” (Ephesians 6:2). While the promises are appealing, I believe that the honouring described in such birthday celebrations is motivated more by the pleasure of keeping traditions, by empathy and love, by bonding and family ties. And a really good excuse to party with a piecaken.