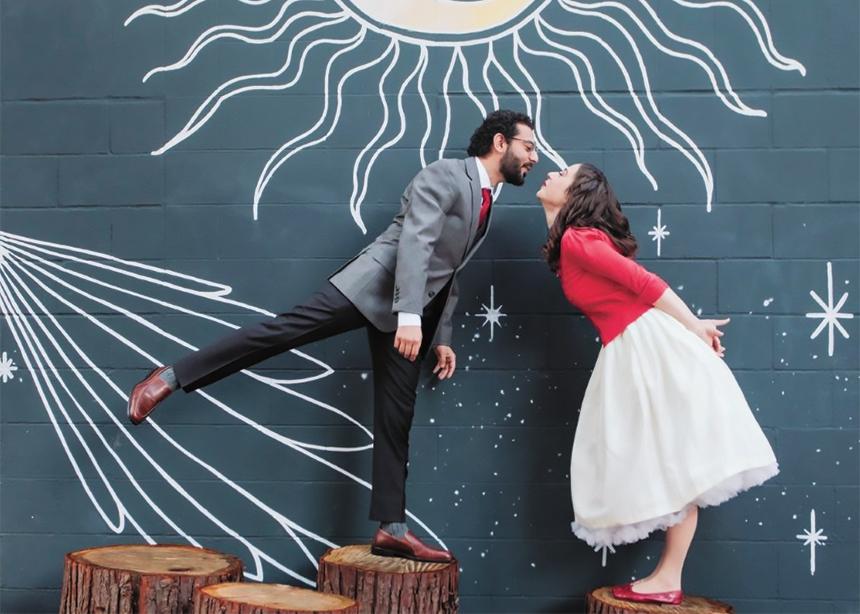 Despite the pandemic, Samih Saltah and Katherine Kandalaft managed to plan a special wedding in 2020. (Photo courtesy of the bridal couple)

The bride and groom may have hoped for a traditional church wedding with an entourage of attendants, surrounded by all their friends and extended family, followed by a fabulous catered wedding dinner. What they ended up with might have been a scaled-down gathering of fewer than a dozen people and a simple backyard meal with everyone wearing masks, or even a drive-by, no-contact reception.

The past year’s coronavirus pandemic has dramatically changed these special once-in-a-lifetime events. Couples who have idealized their dream weddings have been forced to make hard choices: get married now without all the festivities and all the people they want to invite, or postpone the nuptials to an unforeseen date when things have become more normal again.

Three newly married couples from Mennonite Church B.C. congregations shared their experiences with Canadian Mennonite as they reflected on how their wedding plans changed due to the pandemic, and how they adjusted.

A bilingual wedding at Peace Church on 52nd in Vancouver, on Thanksgiving Day, Oct. 12, 2020, was the third attempt for Katherine Kandalaft, who comes from Australia, and Samih Saltah, who comes from Syria, residents of Vancouver since early 2020. Their original plans to marry in Australia in December 2019 and in Vancouver in May 2020 both were thwarted. A Thanksgiving Day wedding proved especially meaningful as they realized they had much to be thankful for.

“In terms of size, we actually had a larger wedding than we would have otherwise had,” says Samih. “We were able to share our joy with many people from across the world that would not otherwise have been able to attend.”

At the time, the province of British Columbia allowed wedding gatherings of up to 50 people. So, although none of their overseas family members could attend in person, many among their church family—Katherine had become a member of the 52nd Avenue congregation just the day before—were present for the celebration, carefully following safety protocols. The couple incorporated into the wedding ceremony recordings by faraway family members offering blessings and prayer and reading Scripture.

“In some ways, the pandemic was the great leveller,” says Katherine. “This way, we welcomed on equal terms family and friends from five continents and nine time zones to a livestreamed ceremony filled with joy.”

On March 28 of this year, Stephanie and Raymond (no surnames given) were married at Vancouver’s Chinatown Peace Church, their home congregation. They had become engaged in 2019 and had hoped to hold their wedding in October 2020. When the pandemic hit, they postponed the date until May 8, 2021, then had to re-evaluate that when restrictions didn’t ease over time.

“Ideally, we would have gone for May 8 and done all the traditional things: bridal shower, tea ceremony with family, a wedding party,” says Stephanie.

The two went back and forth on details of how to proceed with a renewed plan, including only 10 attendees allowed by law. They considered an outdoor ceremony, a drive-by reception, a Zoom wedding, but none of those felt right.

Finally, the couple decided to hold a small wedding at the end of March, only about a week before the event. Because of the minimalism of the occasion, they could implement plans quickly. Wearing a simple dress and cardigan, Stephanie was escorted down the aisle by her father for the brief ceremony of vows, prayer and register signing. Only immediate family were present. As B.C. restaurants were still open at that time for indoor dining, everyone could celebrate afterwards at a local Chinese restaurant.

The newlyweds hope to have a more public celebration “when things get back to normal,” Stephanie says, probably sometime next year, at which the bride says she would wear a traditional wedding dress.

Stephanie says the change of plan has given her a different perspective on weddings. She admits it was hard not to include the many family members who had hoped to be there, as she and Raymond didn’t want to disappoint anyone. She thinks that perhaps the expectations about weddings in general may change now as people realize they don’t have to do things the traditional way.

“Weddings used to be a big deal; now [people say] there are more important things in life,” she concludes.

Nicole Redekop, a member of Emmanuel Mennonite Church in Abbotsford, and Maxwell Stow of Living Waters Church in Ft. Langley became engaged in February 2020, shortly before the pandemic started. They were married on April 10, 2021, at Canadian Memorial United Church in Vancouver.

The Stows had originally planned for a large wedding of 140 to 150 people, but COVID-19 changed that. The ceremony date remained fixed, but a large reception was postponed until a later date. The family was able to gather for an outdoor dinner at Max’s parents’ home after the ceremony.

“It was definitely a tough decision to go forward with the wedding without having all the people that we wanted to celebrate with there in person, but we didn’t want to keep rescheduling constantly with the changing restrictions,” says Max.

Working with a restricted number of 10 people, including bride, groom and officiant, was a challenge, but they managed to have family members act as wedding planner and livestream videographer, thus counting as venue staff and not part of the 10.

“We tried our best, given the limitations, to make it as close to a ‘traditional’ ceremony, with using music and so on, and it was also held in a church,” says Max. They livestreamed the ceremony through a private link and had a little over 80 households tune in, more than could have watched if not for COVID-19.

The couple believe there are pros and cons to wedding planning, whether or not in a pandemic, but in the end they feel satisfied with their scaled-down wedding. “Weddings will definitely be different for quite a while due to the effect that this has had on our lifestyles,” says Nicole. “We feel that we would definitely have done the wedding differently if it were not a pandemic, but considering everything, we were happy how it turned out.”

This article appears in the June 7, 2021 print issue, with the headline “During sickness, but in health, with joy, not sorrow.” Do you have a story idea about Mennonites in B.C.? Send it to Amy Rinner Waddell at bc@canadianmennonite.org. 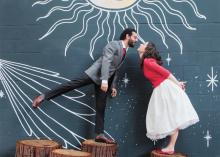 Despite the pandemic, Samih Saltah and Katherine Kandalaft managed to plan a special wedding in 2020. (Photo courtesy of the bridal couple) 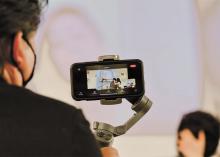 A masked videographer captures the wedding ceremony of Katherine Kandalaft and Samih Saltah last Oct. 12, reflecting the new reality during the COVID-19 pandemic. (Photo courtesy of the bridal couple) 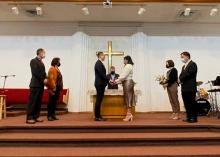 With their parents as witnesses, Raymond and Stephanie are united in marriage by Pastor Tim Kuepfer at Chinatown Peace Church on March 28. (Photo courtesy of the bridal couple) 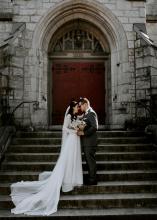 Newlyweds Maxwell and Nicole (Redekop) Stow celebrate outside their wedding venue on April 10. (Photo courtesy of the bridal couple)