Canadians urged to support peace in Israel and Palestine 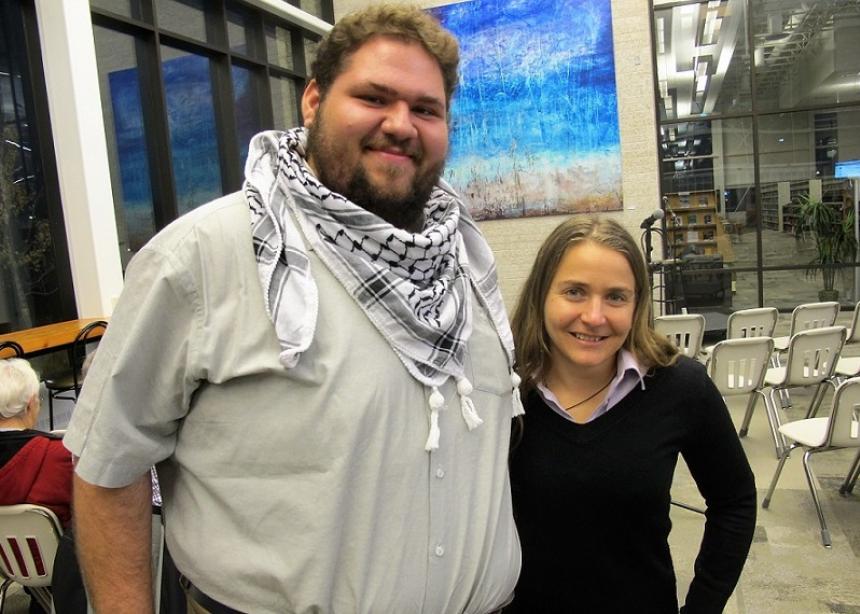 Tarek Al-Zoughbi, left, of Wi’am: the Palestinian Conflict Resolution Center, and Sahar Vardi, with the American Friends Service Committee, provided their views on a just peace in Israel-Palestine at Speaking Our Peace at Canadian Mennonite University. (Byron Rempel-Burkholder)

Sahar Vardi and Tarek Al-Zoughbi live less than 20 kilometres away from each other—Vardi in Jerusalem, and Al-Zoughbi in the West Bank city of Bethlehem to the south. A literal wall, checkpoints and cultures of mutual hatred separate the regions each call home.

The two activists, who met only recently, are pushing toward new paths of peace. Vardi, a 28-year-old Jewish Israeli, did prison time for refusing military duty in protest of her country’s 51-year-old occupation of the Palestinian territories. She now works as a peace advocate with the American Friends Service Committee (AFSC).

On Oct. 27, 2018, the two spoke to a packed audience in Canadian Mennonite University’s Marpeck Commons. The event was one stop on a four-province tour sponsored by Mennonite Central Committee, partners of AFSC and Wi’am.

Al-Zoughbi and Vardi’s congenial sharing of the stage during their presentation and in the question period afterwards was itself a picture of friendship and reconciliation.

Al-Zoughbi opened their presentation by describing the conditions his community experiences under military occupation, which, he said, has deeply affected the psyche of his people. “With the loss of control, we have not been able to practise our culture in a regular way, which has led to an identity crisis, where Palestinians have also become foreign to each other,” he said, adding that Palestinian Christians experience further isolation as they see the settlements around them being supported by fellow Christians in the West.

Vardi spoke of growing up surrounded by soldiers and weapons, her schooling saturated with military imagery. While Palestinians fear Israeli guns, she said, “The way we Israelis are raised to think is that they give us security.” This trust in arms is reinforced each spring in three back-to-back commemorations: Passover, Holocaust Remembrance Day and Independence Day. “You take facts and you decide what the narrative is to be built around them,” she said.

Vardi drew attention to the fact that Israel’s military, by far the most powerful in the region, is exporting its technology and hardware—tested in its wars and its recent bombing missions in Gaza. Its customers include both western democracies like Canada and oppressive regimes like the Philippines.

“Our economy is based on oppression of other people,” she said—and not just Palestinians. “We need to think about what security is. There are more sustainable ways that build community rather than destroying it.”

Grassroots activism for peace in their regions has declined over the last two decades, giving way to a sense of resignation and futility. Gone are the days in the 1990s when young Vardi and her parents would cross the line to work with their Palestinian neighbours to protest the occupation.

Al-Zoughbi and Vardi believe that the key to change in their land today is international pressure. They challenged their Winnipeg audience to get involved in advocacy for justice and reconciliation, both in their own contexts and in Palestine and Israel. When it comes to solutions to Palestine and Israel, each agreed that ending the occupation is only a first step.

Whatever its form, a just peace in Palestine and Israel for Al-Zoughbi includes four requirements:

• Equal and protected rights for all.
• Some form of citizenship for all.
• Recognition of the history of all, especially the marginalized.
• Equal access of each side to each other’s land and cultures.

A question from the floor about how to respond to anti-Semitism was especially poignant, since the mass shooting of worshipping Jews in Pittsburgh had just taken place that morning. “Don’t shy away from difficult conversations,” Al-Zoughbi advised. “Move into action, learn about how you are complicit and talk about how you can be part of a move to justice.” 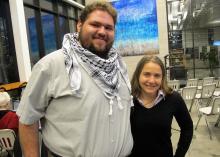 Tarek Al-Zoughbi, left, of Wi’am: the Palestinian Conflict Resolution Center, and Sahar Vardi, with the American Friends Service Committee, provided their views on a just peace in Israel-Palestine at Speaking Our Peace at Canadian Mennonite University. (Byron Rempel-Burkholder)