Out of the pews and into the community

Toronto church reaches out around the world and in the neighbourhood 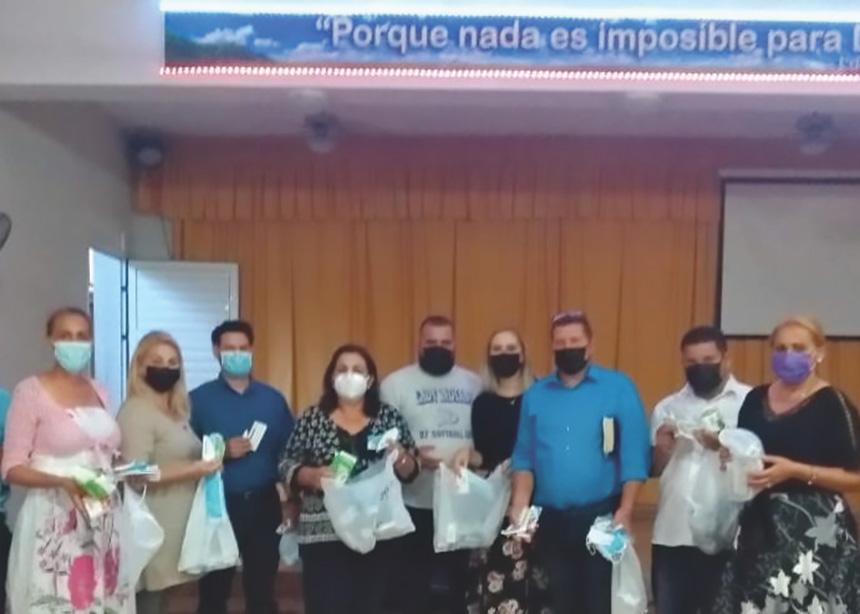 A gathering of pastors from Artemisa and Mayabeque provinces in Mexico who received medical supplies from Toronto Mennonite New Life Church. (Photo by Beatriz Mendez)

“We are out of the pews but in the community,” writes congregational member Olga Duran in the latest Toronto Mennonite New Life Church report, which summarizes 2021 as a year of immense giving and receiving of community support. For this congregation, gathering virtually has contributed to growth in a myriad of ways, including fostering local and international relationships and expanding fundraising efforts.

New Life was founded in 1983 by Adolfo and Betty Puricelli to reach out to refugee and immigrant communities and to respond to their diverse needs. At the time, there were many refugees coming to Canada from Latin American countries due to civil war and political violence.

Today, the church continues to support Spanish-speaking immigrants and refugees. The church is not only supporting integration into Canada but is “a place where spiritual needs can be nurtured among newcomer families,” says Maciel Hernandez, a longtime member. She says that for some, this is the first place where they held and read the Bible.

The church has experienced many pastoral transitions. The 2013 retirement of Pastor Adolfo Puricelli opened up an opportunity for a new model of lay leadership, with mentoring and support from Mennonite Church Eastern Canada. “It is a small, mighty community where God is at work,” says Maciel. “It is a community in action.”

However, as many church congregations shifted to virtual life together during the pandemic, the congregation found a new way of serving across borders. Each Sunday, Pastor Moises Hernandez has been hosting and leading service from Mexico over Zoom for the Toronto-based congregation.

Upon travelling to Cuba, Pastor Hernandez connected with Beatriz Mendez, a Cuban Mennonite pastor, who told him about an urgent medical need due to COVID-19. Many of her church’s members had contracted COVID-19 and were requesting medical supplies.

The New Life congregation mobilized quickly and collected funds to meet this need. It was more efficient for Pastor Hernandez to purchase supplies in Mexico to be delivered to Emmanuel Mennonite Temple (Templo Menonita Emmanuel) in Cuba. In just a few weeks, New Life had raised $800, resulting in a total of eight boxes of the required medications and other health supplies.

At New Life’s 34th anniversary in November 2021, the Cuban congregation joined them to express gratitude for the medical-support boxes. This donation had extended beyond that church and had been shared with other church congregations in their local community.

“This Zoom business has a purpose to show there are no limitations no matter where you are from,” expressed Maciel.

Bridging local and international church communities did not end there. At New Life, Sunday services are often attended by many former congregational members from Argentina, Cuba, Mexico, Colombia and Guatemala. Virtual churches foster conversations between members who would not have the chance to physically gather in person.

The intermixing of Latin cultures helped catalyze the church’s popular fundraiser, called “Taste of Latin America,” prior to the pandemic. The fundraiser offered foods from countries reflective of New Life’s diversity, such as Ecuador, El Salvador, Costa Rica, Nicaragua, Argentina, Honduras and Cuba. “It is like going to a different country. A chance to try new foods without purchasing a plane ticket,” says an attendee.

Since 1997, New Life has shared a building with Toronto United Mennonite Church. Although they were not able to meet in the building, they discovered last year that the roof needed costly repairs and improvements. Building on the success of "Taste of Latin America," the two congregations were joined by Wideman Mennnonite Church, Markham, Ont., to carry out a virtual auction of baked goods.

There was a cake in the shape of a cathedral that sold for more than $600. Another cake sold for $500 and a dozen raisin tarts sold for $200. In total, the virtual bake sale fundraiser raised more than $6,000.

“What may seem impossible is possible for God," says Maciel. “Keep your eyes open, mind open, heart open and hands willing to do.”

Gloria Lily Hurtarte is an example of willing hands. She serves as the spiritual counsellor at New Life, but she also uses her skills as a hairdresser as a means for ministry.

She began her hairdressing business seven years ago in the basement of her home. As Hurtarte cuts people’s hair, she finds opportunities for speaking about faith and God. She sees her work as a blessing in this form of service.

Betty Puricelli describes the salon as a “church foyer.”

In a time when church members are scattered because of the pandemic, they continue to re-imagine fundraising and their community building continues through technology and homes used as places to gather. 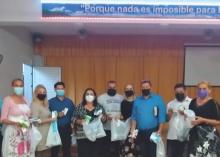 A gathering of pastors from Artemisa and Mayabeque provinces in Mexico who received medical supplies from Toronto Mennonite New Life Church. (Photo by Beatriz Mendez)

(Translation: I am a witness to the precious work of love that the Nueva Vida community in Toronto is doing. In the most difficult moment when there were no medicines in Cuba, incredibly, without knowing us, they were the angels that God used to bless us and to help us get the medicines we needed in a short period of time. Many people from the community of faith and non-Christians were benefited and thanked us with tears in their eyes. Our Lord said that blessed are those who think of the poor because in the evil days Jehovah will help them. Thank you very much dear brothers and sisters!)