The ordinary lives of ordinary Mennonites 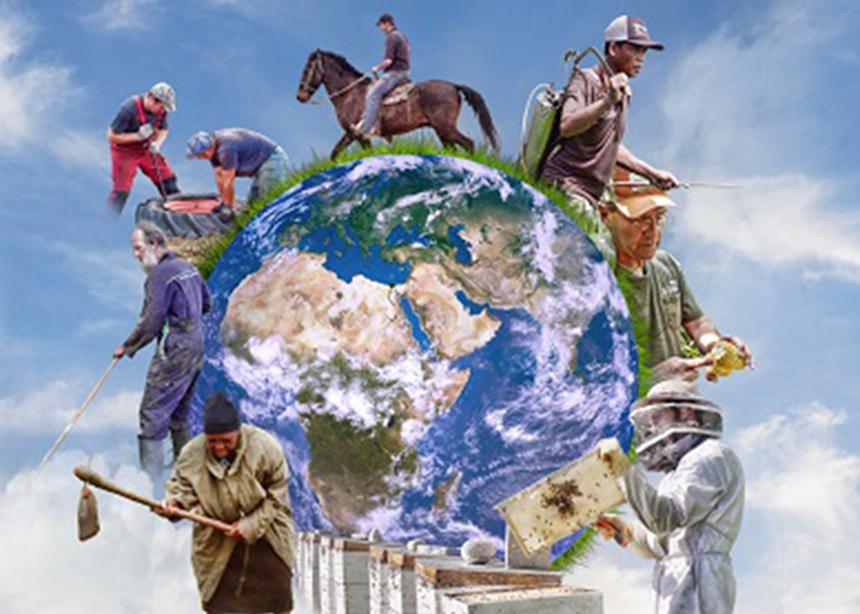 The documentary "Seven Points on Earth," features Mennonite farmers around the world.

Seven Points on Earth, Paul Plett’s documentary about Mennonite farmers around the world, premiered at Winnipeg’s Real to Reel Film Festival on Feb. 21, 2018. The hour-long film tells the story of seven Mennonite farming families in seven different countries: Canada (Manitoba), United States (Iowa), The Netherlands, Zimbabwe, Indonesia, Bolivia and Russia (Siberia). Plett followed each of these families around for five days, filming their activities and talking with them about life on the farm. It sounds potentially boring, but for me it was endlessly fascinating.

The film begins with a concise history of Mennonites, aided by comments from Royden Loewen, Chair in Mennonite Studies at the University of Winnipeg. Loewen, who co-produced the film with Plett, makes helpful comments throughout the film, providing context for the long history of Mennonite involvement in farming, which is credited, in part, to Mennonites’ perceived expertise in land reclamation. With assistance from Loewen, the farmers also explain how Mennonites ended up farming in these various locations, in some cases because of Mennonite mission work.

As Plett then introduces us to the seven families and their settings, we learn that the young couple from Manitoba are building a farm starting with bees and grains; the Iowa couple are focussed on pigs and corn; the farmer in The Netherlands does organic dairy farming; the woman in Zimbabwe has a small farm for maize and various crops needed for daily life; the Indonesian farmer has rice and bananas, and is also growing food for his family; the farmer in Bolivia has cattle, both for dairy and beef; and the Siberian farmer concentrates on pigs.

All of these farmers seem very happy to be doing what they’re doing, agreeing with the sentiment that this is “the best way of life.” This is evidenced by responses to Plett’s question about what an average day for each of them looks like. Despite the risks of weather and the challenge of changing seasons, there is a sense of relaxed contentment and gratitude. This is enhanced by the strong faith of these families, which provides them with an underlying hope. It was notable that the poorest families do not hesitate to pray for rain, while the wealthier families pray for God’s blessing on their work and deal with whatever comes.

Not that any of the farmers are very wealthy, as these are all relatively small farms. But there are notable differences in the low-and-high-tech equipment used by the farmers. There are no differences, however, in how these farmers view the importance of their work. Food is a basic requirement for life and it doesn’t come from the store, as many people seem to think.

Other themes touched on by Seven Points on Earth include the importance of community and simplicity, and the varying gender roles, heavily influenced by the roles of parents. Almost all of the farmers shown in the film are men.

In the talk-back after the screening, Loewen explained that this was accidental, as last-minute cancellations forced Plett to work with different farmers than was initially planned. Unfortunately, the sense remains that this is largely work led by men in traditional roles.

While Seven Points on Earth is effectively educating people about Mennonites today, I also see a danger in how its focus on farming may perpetuate the myth that most Mennonites today remain on the farm. Perhaps a comment to that effect would be helpful.

All in all, however, Plett’s documentary is beautifully made, with a structure and pacing that prevents boredom—for me at least—and an authentic un-coached way of filming that helps us feel as if we have truly gotten to know the farmers involved. Plett noted in the talk-back that, while there was no forced agenda, he was hoping to express something spiritual that would open like a flower during the course of the film. I believe he has achieved that.

Seven Points on Earth will be released online this spring. This excellent and enlightening documentary will appeal particularly to Mennonites—the admitted target audience—but is also a helpful introduction to non-Mennonites. Highly recommended for church groups. 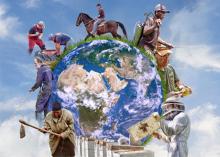 The documentary "Seven Points on Earth," features Mennonite farmers around the world.

Thanks Paul. Wonderful to see our history and where we are going.