Who is my neighbour?

The Opioid Crisis: Pt. I
Exploring the church’s response to the opioid crisis 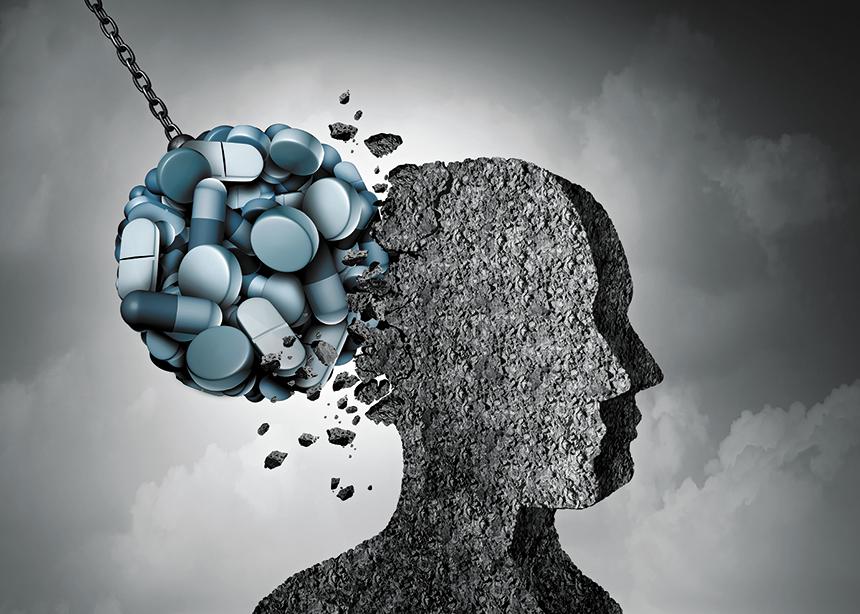 It can be overwhelming to imagine how to address this crisis, but Erb Street Mennonite Church in Waterloo, Ont., recently finished a six-week adult and youth Sunday school series entitled “The opioid crisis: Understanding addiction as a disease.” The six sessions were packed.

Mabel Hunsberger, a retired health-sciences professor, and Jodie Boyer Hatlem, Erb Street’s co-pastor, shaped the series after members of the congregation expressed a desire to learn more about the problem in Waterloo Region, where 20 people died from overdoses in the first three months of this year.

They sought input from members of the church and wider community: a doctor, a pharmacist, a politician, a spiritual caregiver and social service providers. Topics included the scope and history of the crisis, how opioids work in the body, community strategies and resources for treatment, and how churches can accompany people who are suffering.

How did we get to this point?

Many people lay the blame for the current crisis at the feet of pharmaceutical companies that developed pain medications containing opioids and marketed them despite their addictive properties, and the doctors who over-prescribed the drugs. This led to a black market demand for stolen prescription drugs. Currently, fentanyl (a synthetic opioid) and carfentanil, which is even more potent, are being integrated into other illicit drugs, all of which can be injected. Because the amount of carfentanil equivalent to a few grains of salt is deadly, imprecise dosages can easily trigger an overdose.

But Joe Mancini, co-founder of the Working Centre, a social agency in Kitchener, Ont., argues that what contributes to addiction also has deeper, more systemic roots. In his organization’s newsletter, he writes that “dislocation is the root cause of addiction.” When people no longer feel they belong, he says they often use drugs “to mask trauma, abuse, shame, failure and stress.”

John Neufeld, executive director of the House of Friendship, a Kitchener-based social services agency, concurs. He cites the three E’s:

These can lead to poor health outcomes, including drug addiction, later in life. He emphasizes that the best way to mitigate the impact of these E’s is to have buffers: caring and compassionate family, friends, counsellors, mentors and others, who provide support and encouragement.

Dispelling the myths and breaking the stigma

Hunsberger says that one of the major goals of the Sunday school series was to reduce stigma around the use of drugs. Moral bias, blame and judgment create a burden of guilt and shame that keeps addiction hidden and people suffering in isolation. She emphasizes that “individuals from all walks of life can be affected by the opioid crisis,” which means this is “close to home” and impacts families, friends and coworkers.

Neufeld echoes the concern about the harm of stigma. He says the church needs to see addiction as a medical condition rather than a moral failure, and approach treating it the same as heart disease or cancer.

How can churches respond?

Certainly, lots of people of faith work on the front lines as healthcare providers, street outreach and social workers, counsellors and spiritual caregivers. As people of faith, Christians are called to love and serve their neighbours.

Margaret Nally is a long-time spiritual caregiver to the staff at the Working Centre and conducts memorials when the people they serve die. She calls on people of faith to “bear prophetic witness to the burdens of sorrow and sadness and poverty that people live with.” Doing so, she says, acknowledges that “all people are created in the image and likeness of God,” and affirms that “all human life has worth and value.”

Increased knowledge helps people name and examine their biases, prejudices and assumptions, and helps to reduce fear and stigma. “Fear is dissipated when we have knowledge,” Neufeld says. That’s why people should seek out experts in the church and community, learn about local social-service agencies and treatment programs, find out what governs political decisions, and listen to the stories of people who are suffering.

Nally says it is also important to draw attention to the “structural issues that marginalize people.” She says so much could be solved by addressing poverty, lack of jobs and insufficient affordable housing.

Neufeld agrees that the church should ask “uncomfortable questions,” such as, why are people in our society feeling so “disconnected . . . that they need a substance to allow them to escape?” He gave the example of a Kitchener pastor who provided a “strong voice of advocacy” around the location of a harm-reduction site, insisting that it was needed now. Civic leaders responded to his pleas, demonstrating that the faith community can impact political decisions.

Creating healthy communities can be one of the best ways to prevent addictions and overdoses. Nally says that the church, at its best, should be able to welcome and incorporate a wide range of people.

Neufeld adds, “The church has got to keep doing what church has always done best: community. Churches can be the drug of choice.”

And churches can encourage developers to build affordable housing, and inspire members to volunteer at food banks and shelters, make and serve meals for people who are hungry, and welcome newcomers. As Mancini describes it, churches need to “create places of welcome that work to counteract dislocation.”

According to Neufeld, it is the role of the faith community to be “people of hope . . . people of light.”

Walking alongside people with addictions 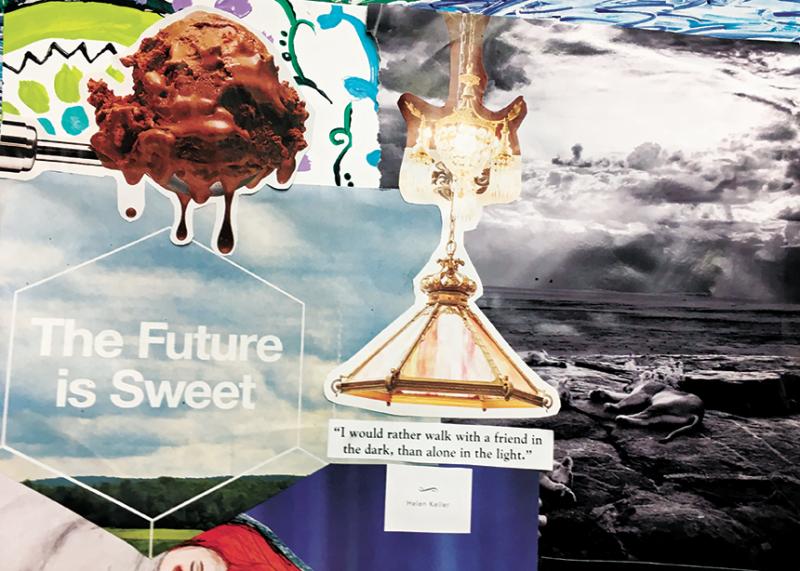 A collage Sarina Brandt made with some of her clients at Hearthstone, Abbotsford Community Service’s low-barrier women’s residence. (Photo by Sarina Brandt)

Across the country, opioid addictions are taking hold and claiming thousands of lives. But at the same time, a number of Mennonites across Canada are walking alongside people with addictions and providing essential services, including informal pastoral care, social services and advocating on their behalf.

Caleb Redekop, 27, is one such person.

He attends Rockway Mennonite Church in Kitchener, Ont., and works as a community outreach coordinator at the Kitchener Public Library. He’s worked in the field for five years, previously at a men’s shelter doing street outreach and harm reduction.

“If we attribute [addiction] to an individual and not a systemic concern, it allows us to ignore their pain and suffering,” he says, adding that stigma has very real consequences for people living with addictions.

Redekop gave a sermon at Bloomingdale and St. Jacobs Mennonite churches last summer, calling on listeners to follow Jesus’ model of challenging stigmas and approaching people with addictions with love instead of judgment. Sometimes stigmas can result in a “not in my backyard” mentality, he says.

Another is Sarina Brandt, 24, a member of Emmanuel Mennonite Church in Abbotsford, B.C. She works for Abbotsford Community Service’s low-barrier women’s residence called Hearthstone and the Elizabeth Fry Society in its dry treatment facility.

She grew up in Abbotsford, a community with a history of poorly treating people who experience homelessness and drug addiction. For many years, the community had an anti-harm reduction bylaw that prohibited services like supervised injection sites and needle exchanges, unlike Vancouver, which is only an hour’s drive away.

She says that sort of mentality doesn’t help the problem: “From my perspective, harm-reduction and housing-first policies are reducing what’s happening in my backyard. If you don’t want people to be using, overdosing or dying in the street, then it’s less about getting it out of your backyard and [more about] talking about preventing it in the first place.”

Alisha Nafziger, 31, attends the Gathering Church in Kitchener and is an addiction counsellor in a residential treatment centre. She also does day treatment community counselling with House of Friendship.

She says that her more-than-eight years of working in the field have forced her to change many of the stereotypes she had about people with addictions.

“Addiction is the Band-Aid to cope with all the stuff underneath,” she says. “I’m working with people to process the even-harder stuff: the trauma, the hurt and the shame.”

“Jesus came for those who are sick and in need of healing,” she adds, “so to judge is in direct opposition. I view myself as a little vessel to bring some light into dark spots, and help them feel acceptance.”

1. How has your life been touched by opioid addiction or overdoses? How severe is this crisis in your part of the country? Who is working to reduce the damage of opioid addiction? Where do you see hope for improvement?

2. Janet Bauman quotes Joe Mancini, who says that people use drugs “to mask trauma, abuse, shame, failure and stress.” What are the best ways for a community to work at dealing with these systemic roots of addiction? Is homelessness more of a cause or more the result of addiction?

3. Those who work with addicts say it is important to love and not to judge those caught in homelessness and drug addiction. Do you find this hard to do? Why have we tended to see addiction as a moral failure?

4. Bauman writes that the best way to prevent addiction and overdoses is to have healthy communities. What makes a healthy community? How well does your congregation foster a sense of belonging? How can churches strengthen their bonds of fellowship?

Further reading:
Opioid crisis: A view from the inside 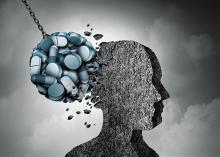